The contents page of POINTS 20 did not carry a date of publication.  The notice of legal filing on the last page is dated the second quarter of 1955 so it would appear that POINTS 20 was published in late winter or early spring of 1955.
Vail remarks in his introductory notes that short story submissions have declined to the point where this present issue contains only three stories.  Although he indicates that another issue might be forthcoming in the spring, POINTS 20 was the last and final number that Vail published.  He notes that the short story collection was also published and available wherein he had selected fifteen stories from the seventy five that had appeared in the nineteen issues of POINTS published in the last seven years.
Commentary © James A. Harrod, Copyright Protected; All Rights Reserved 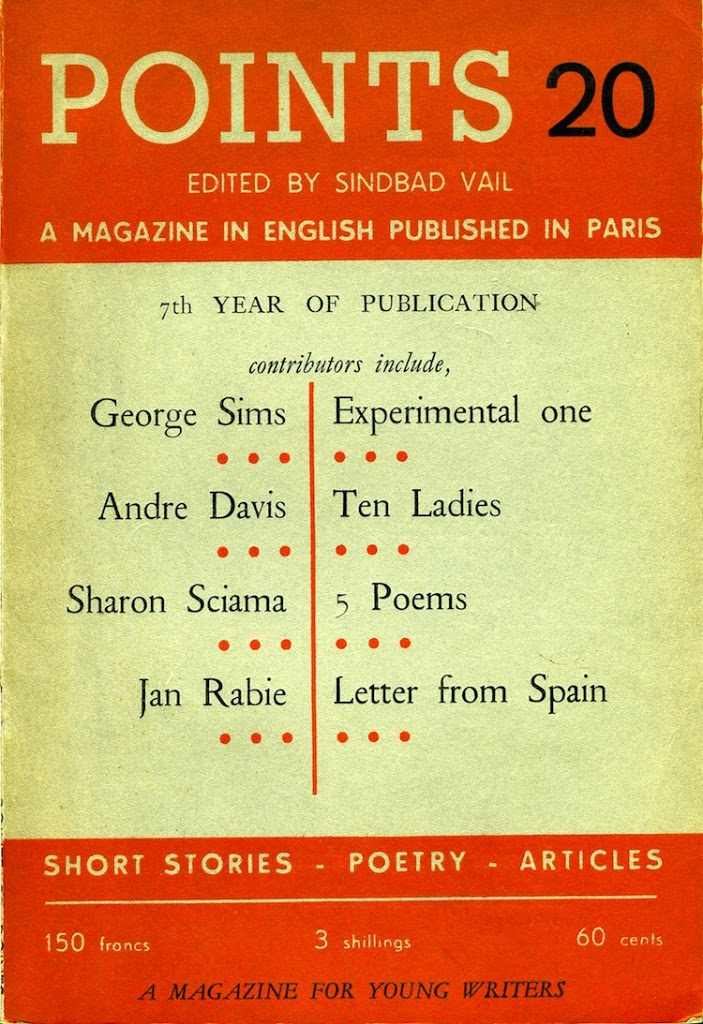 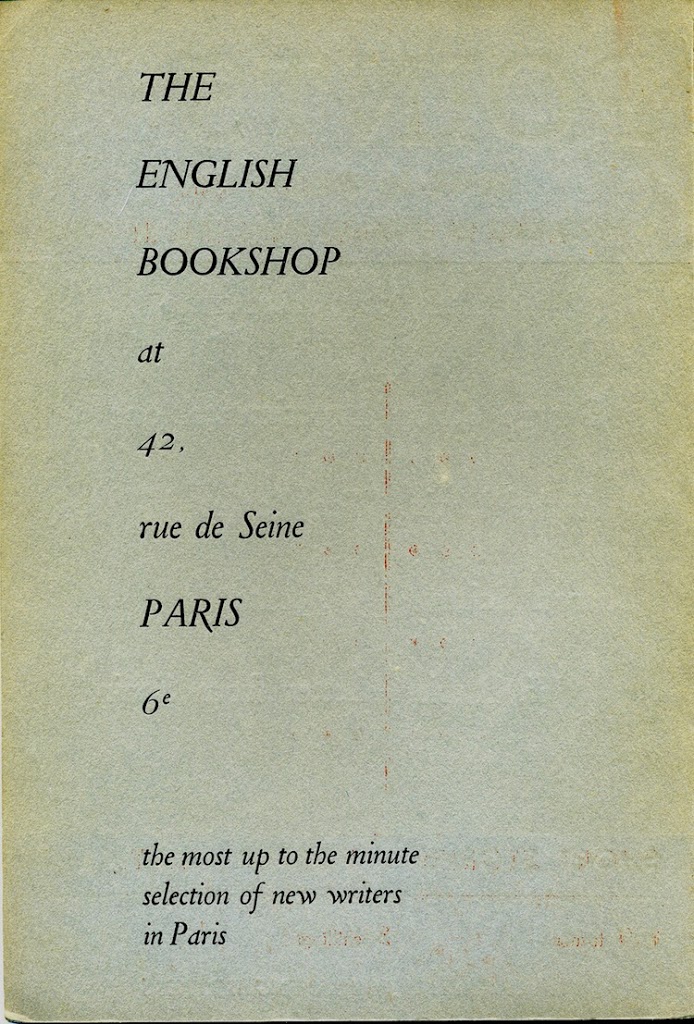 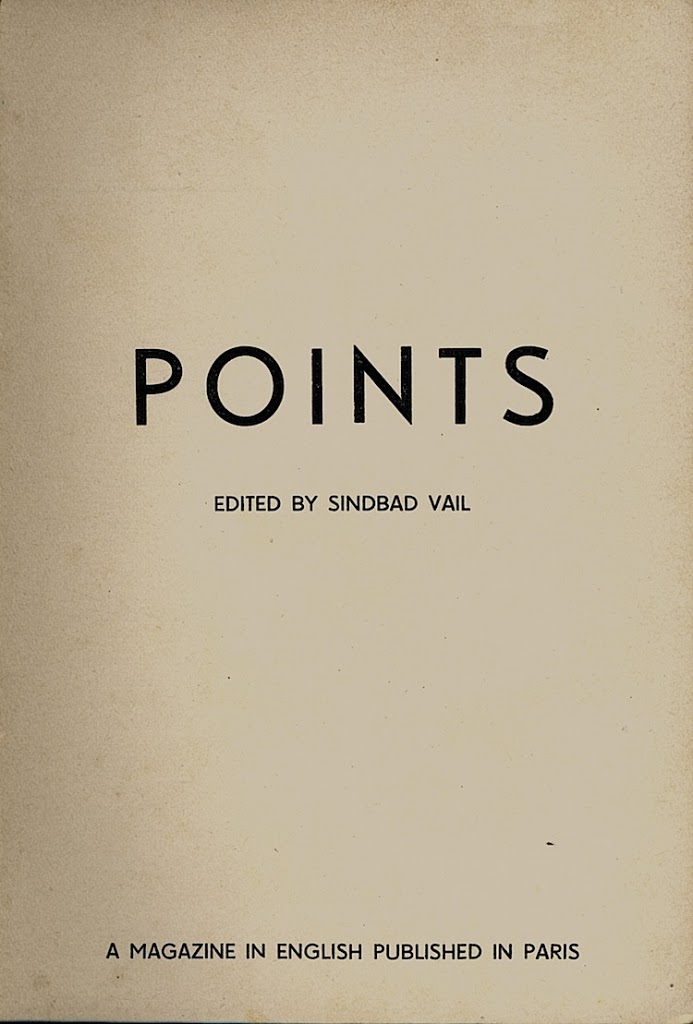 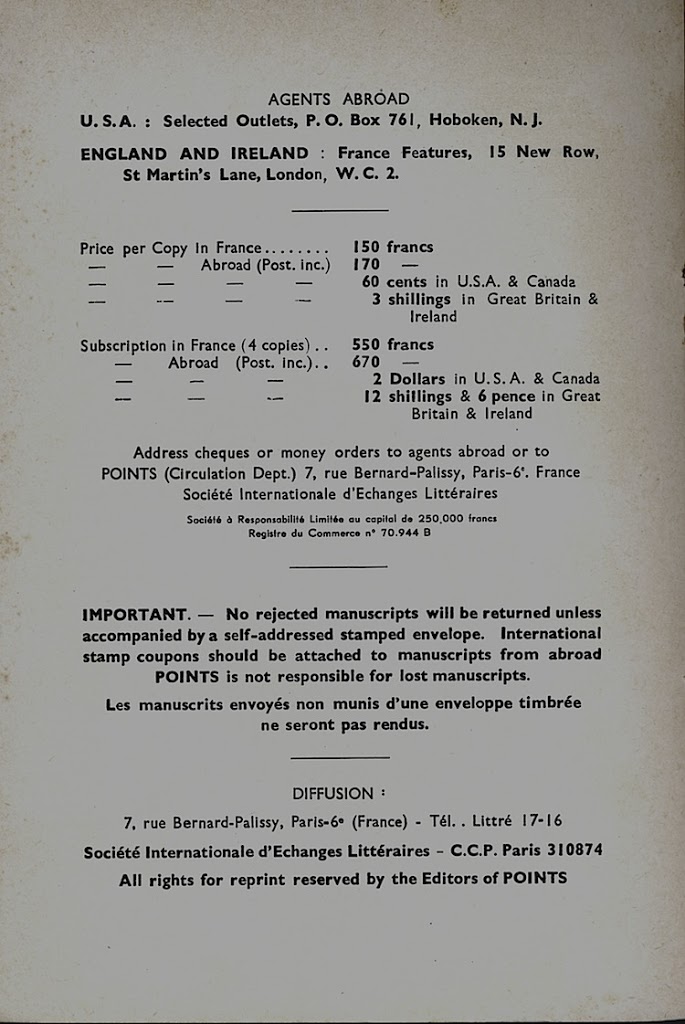 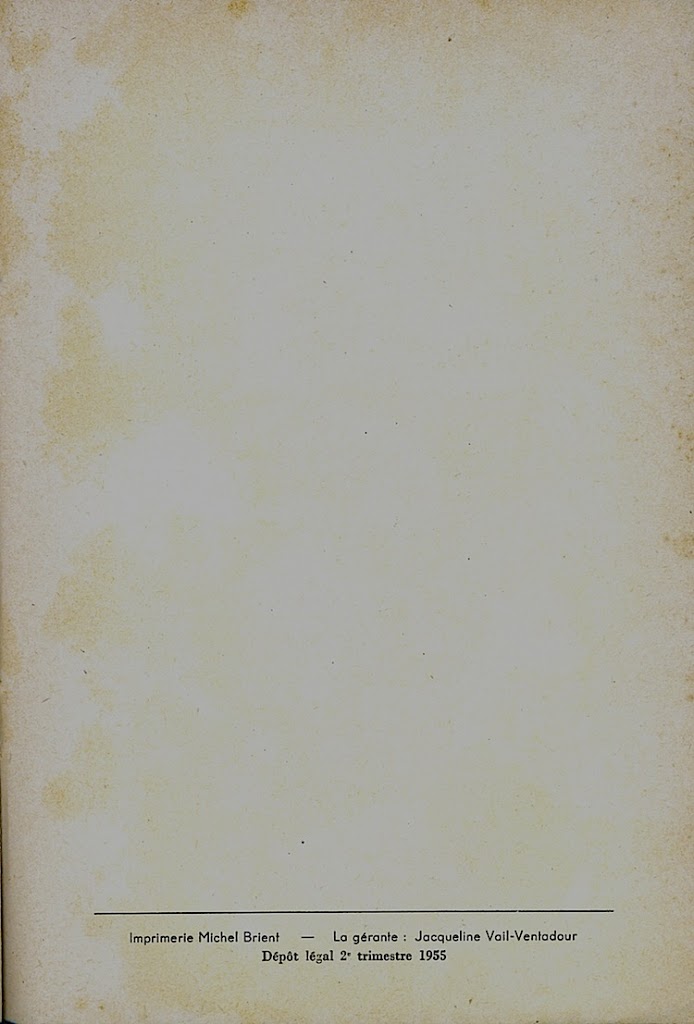 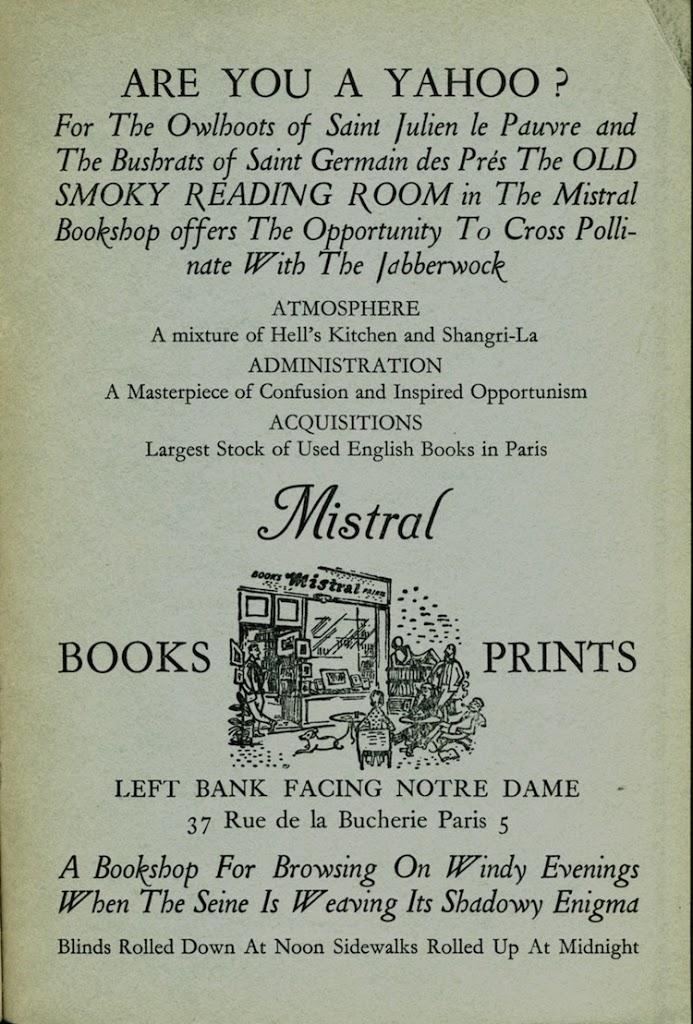 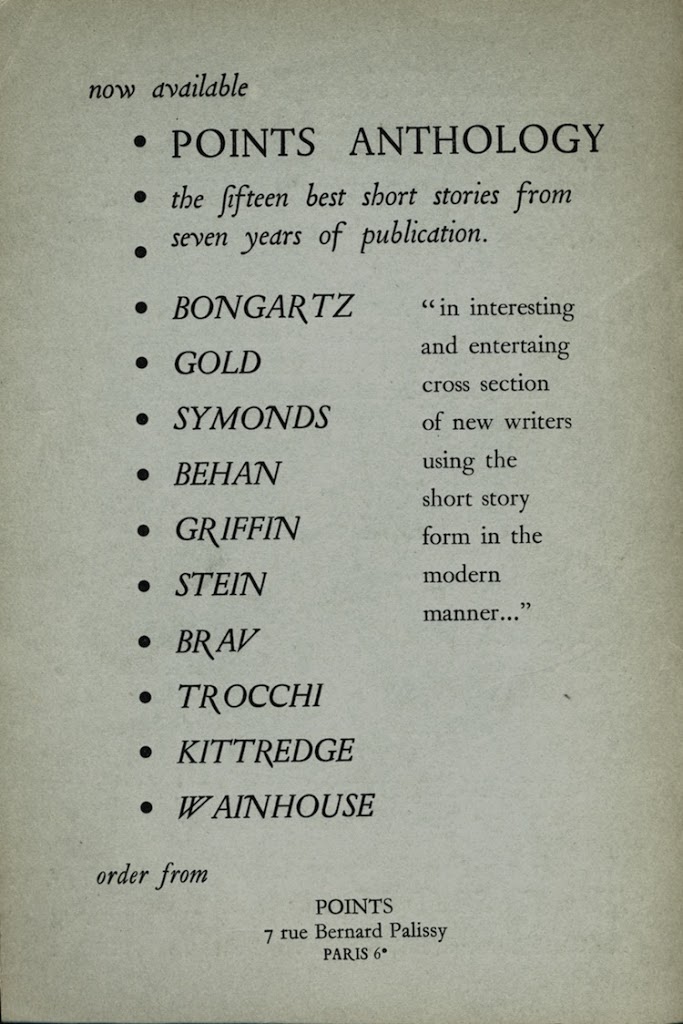 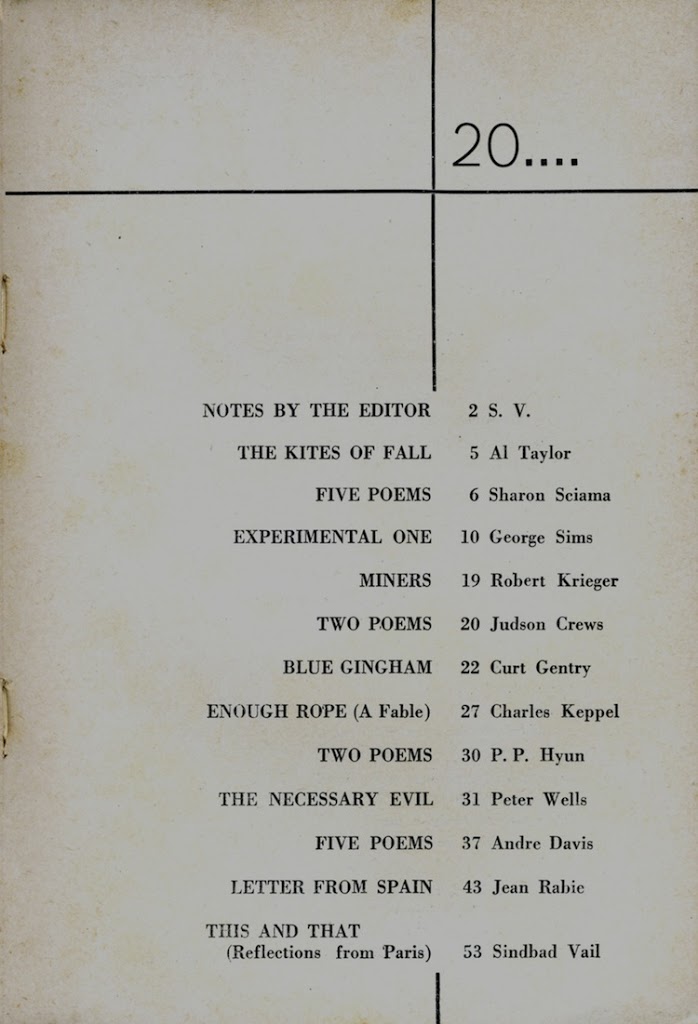 (contents)
CONTENTS
NOTES BY THE EDITOR – Sindbad Vail
THE KITES OF ALL – Al Taylor
FIVE POEMS – Sharon Sciama
EXPERIMENTAL ONE – George Sims
MINERS – Robert Krieger
TWO POEMS – Judson Crews
BLUE GINGHAM – Curt Gentry
ENOUGH ROPE (A Fable) – Charles Keppel
TWO POEMS – P. P. Hyun
THE NECESSARY EVIL – Peter Wells
FIVE POEMS – Andre Davis
LETTER FROM SPAIN – Jean Rabie
THIS AND THAT (Reflections from Paris) – Sindbad Vail
NOTES BY THE EDITOR
This issue of POINTS has been long overdue.  As I have said before the tribulations and difficulties of a little magazine are many. It is no good moaning about it but the fact remains that it is very hard to get material of the standard I want. This issue is a bit smaller than the previous one for that reason. I could have put more short stories in but I did not think I had any that were good enough. It has come to the point when I’m including some of my own work, not perhaps that it’s better or worse than others, but it’s fun, will set a contrast in the various styles and of course is cheaper as I don’t have to pay myself.
The amount of poetry this magazine receives never ceases to amaze me. I daresay most of it is puerile and bad, but it does come in in large quantity. I have only published 3 short stories in this issue, and doubt if I had more than a dozen in all I could have even properly considered. I must have received five times more poetry than prose in the past few months. In the end I published more poems than I originally intended. I have read so much poetry in fact lately that I was tempted to dabble slightly myself in that form of writing. For the hell of it I’m reproducing the following work of art composed by myself on a bad Sunday morning, with the kids playing around me and Tchaikowsky’s Fifth Symphony blaring in my ears. Perhaps my readers will say it sounds like it, but this is the way I feel about many poets I meet and many poems I read:
Why do people write poetry?
Is it to be funny?
Must it always rhyme
With every preceding line?
Must poets be romantic?
Vague and frenetic
Drunken and exhilarated
And always wasted.
Must poetry be about love
About the stars above
About peace and a dove
And always of a lost love.
Must poets starve and live in garrets?
Wear old rags and exist on raw carrots?
Must poets be so ideal and so poor
Trampled and ignored
walked on like the floor
And always be so bored.
How about Lord Byron?
He was not spat on
He was privileged and rich
And incidentally a bit of a bitch
Given to debauchery and a bit of a pest
Who did not mind committing a little incest.
How about Alfred Lord Tennyson?
“Into the Valley of Death”
Ancestor of many a noble scion .
To whom riches were not beneath.
Take Elliot, cummings and Pound
And leave them at the “Lost & Found”
It’s easier to make a pun
Than anything under the sun.
So it all boils down
And please don’t frown
Why write poetry like eager beavers
When its easier to make a living selling vacuum cleaners.
Perhaps this poem will never make the Oxford Book of Verse and will outrage many real sensitive poets, but POINTS is still my magazine and its time to have a bit of fun with it.
By the time this issue is out the POINTS SHORT STORY ANTHOLOGY ought to be out too. The book should have appeared many months ago. I could write a long story on the difficulties that occurred during its compiling and the bigger troubles I had with the printers. It languished for over a month, all set for the actual printing for lack of paper. I made the mistake of paying a paper dealer in advance and that paper was never delivered. I could not go ahead until I recuperated the money to order the paper elsewhere. Now that it’s out I hope everyone will order a copy. The book contains fifteen short stories taken from the seventy five printed in nineteen issues of POINTS.
We’ll try and get another POINTS out in spring and may I remind would be writers that I’m more interested in a good story than 23 poems on love, death or even life. 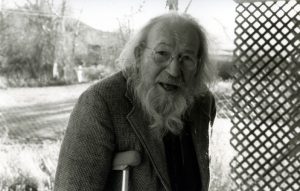 Photo by Mark Weber
Posted: Saturday, May 22, 2010 12:00 am
By Chandra Johnson
Taos poet Judson Crews wore blue jeans and, like much of his life, it set him apart from everyone else.
“He wore them before anyone else did. And denim jackets, too,” daughter Carole Crews said of her father, who died Monday (May 17) at age 92. “He was very different from most people. Very ahead of his time. I remember seeing his college photograph. He had a beard and underneath it said, ‘One in a million.’ ”
Born in Waco, Texas, in 1917, Crews found his way to Taos in 1947, after living in Big Sur, Calif., near his friend and “Tropic of Capricorn” author Henry Miller. In Taos he met and married photographer Mildred Tolbert. The two settled in a large hacienda on Valerio Road that cost $2,000 “in those days,” Carole Crews said.
The two enjoyed a 1950s bohemian lifestyle of perfecting their crafts, being parents and partying with their fellow artists.
“It was amazing and fun to be around so many artists and writers,” Carole Crews said of her childhood.
But it wasn’t all play — Tolbert, who was a prolific photographer, worked diligently, while Crews worked for 18 years as a printer for El Crepúsculo — the newspaper forerunner of The Taos News — scribbling at night and on weekends.
“He could write 20 poems in an afternoon,” Crews said of her father’s output.
Crews’ writing was so natural that when he and Tolbert divorced after 25 years of marriage, Crews took a trip to Africa and did what he did best — he wrote about it.
“He wrote reams and reams and quit about halfway through. He just couldn’t come to terms with his marriage,” Carole Crews said.
In the 1970s and ’80s, Crews began honing the writing underground with what he called “the littles” — small, intense, self published poetry books and magazines he famously illustrated with black and white photographs of nude women.
One of his most famous magazine endeavors was known as “The Naked Ear,” Carole Crews said. Some of these magazines published some famous American authors like Charles Bukowski.
“I think he loved poetry because of the rhythm. He loved to make up words,” Carole Crews said. “Drumble was one. I don’t know what it means.”
“The littles” made Judson Crews something of a cult legend with local Poets, including writer Mark Weber, who wrote a blog article about his friendship with Crews in Albuquerque when they met in 1991.
“We were drinking buddies,” Weber wrote of Crews. “Back then the little poetry magazines were on fire. They didn’t have huge print runs and circulation was spotty, but somehow we all read them. Judson had been a mainstay of the littles for decades.”
Fairleigh Dickinson University Prof. Paula Mayhew wrote on Weber’s blog about Crews’ pioneering practice of dumpster-diving one afternoon in the early 1990s.
“We sat down to drink some serious vodka. What impressed me was his declaration that he was a ‘dumpster diver.’ He regaled us with dumpsterdiving stories throughout the afternoon,” Mayhew wrote. “It was fabulous. Whenever I see a dumpster, I think fondly of Judson.”
Carole Crews said a fence was installed to indulge her father’s other luxury: Nudity.
“He was sort of a nudist. He loved sunbathing like that,” Crews said. “We had stockades around the house so he could lie in the sun in the nude.”
Crews’ final resting place, his daughter said, would be a sun-soaked plot in the Tres Orejas Cemetery. The family burial took place at sundown Monday evening.
Curt Gentry
From Wikipedia, the free encyclopedia
Curt Gentry (born 1931) is an American writer. He is best known for co-writing the book Helter Skelter with Vincent Bugliosi (1974), which detailed the Charles Manson murders. Gentry lives in San Francisco, California.
Helter Skelter won a 1975 Edgar Award from the Mystery Writers of America for Best Fact Crime book.[citation needed]
Select works
The Last Days of the Late, Great State of California, 1968
J. Edgar Hoover: The Man and the Secrets
The Madams of San Francisco: An Irreverent History of the City by the Golden Gate, 1964, paperback reprint 1971
The Killer Mountains: A Search for the Legendary Lost Dutchman Mine
Helter Skelter: The True Story Of The Manson Murders (with Vincent Bugliosi)
Frame-up: The Incredible Case of Tom Mooney and Warren Billings
The Dolphin Guide to San Francisco and the Bay Area
Jade: Stone of Heaven (with Richard Gump)
John M. Browning: American Gunmaker (with J. Browning)
The Vulnerable Americans
A Kind of Loving (with Toni Lee Scott)
Operation Overflight: The U-2 Spy Pilot Tells His Story for the First Time (with Francis Gary Powers)
Second in Command: The Uncensored Account of the Capture of the Spy Ship Pueblo(with Edward R. Murphy)