POINTS 18
POINTS 18 was published in the winter of 1953/54. The new cover layout that appeared on POINTS 17 was retained and would continue to be used for the duration of the journal.  Sindbad Vail’s introductory comments, usually brief and apologetic, are forth-right and provide a glimpse of the trials Vail endured in bringing POINTS to life.
Commentary © James A. Harrod, COPYRIGHT PROTECTED; ALL RIGHTS RESERVED 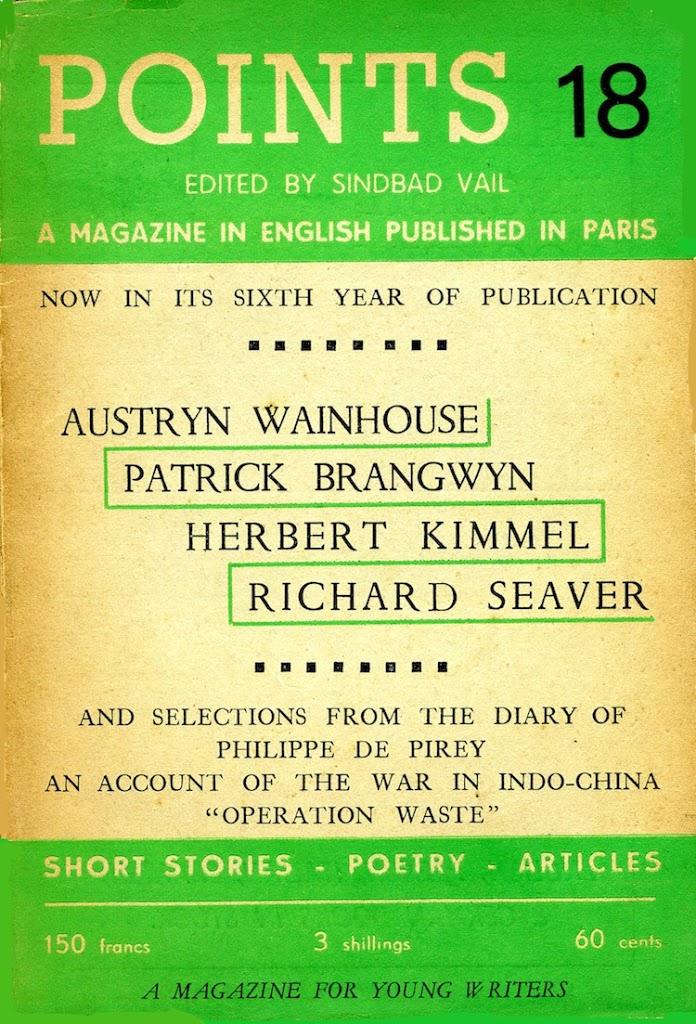 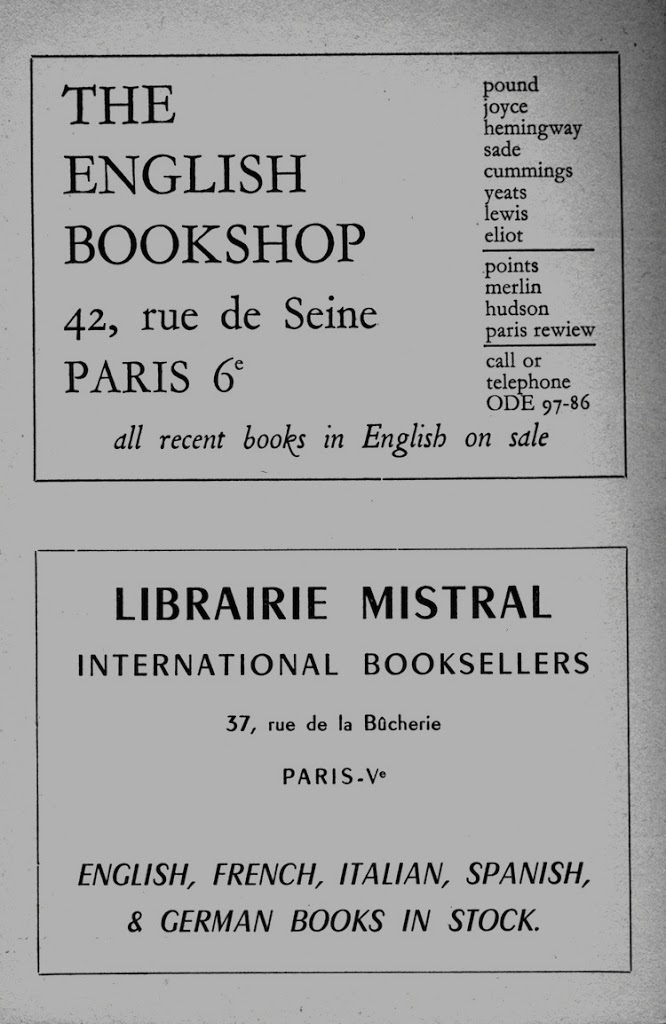 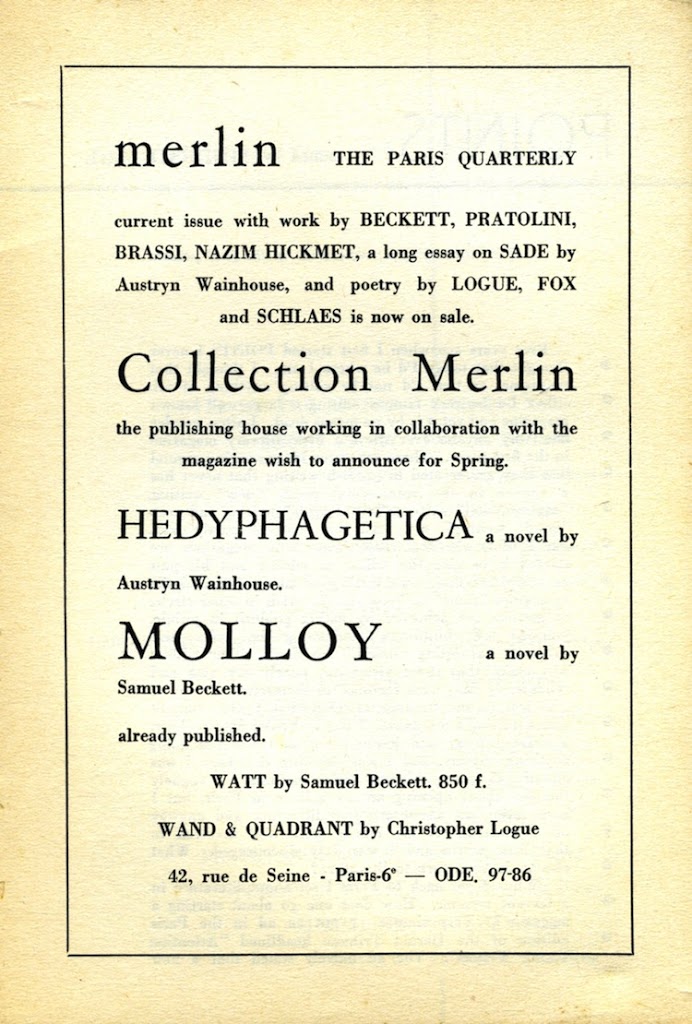 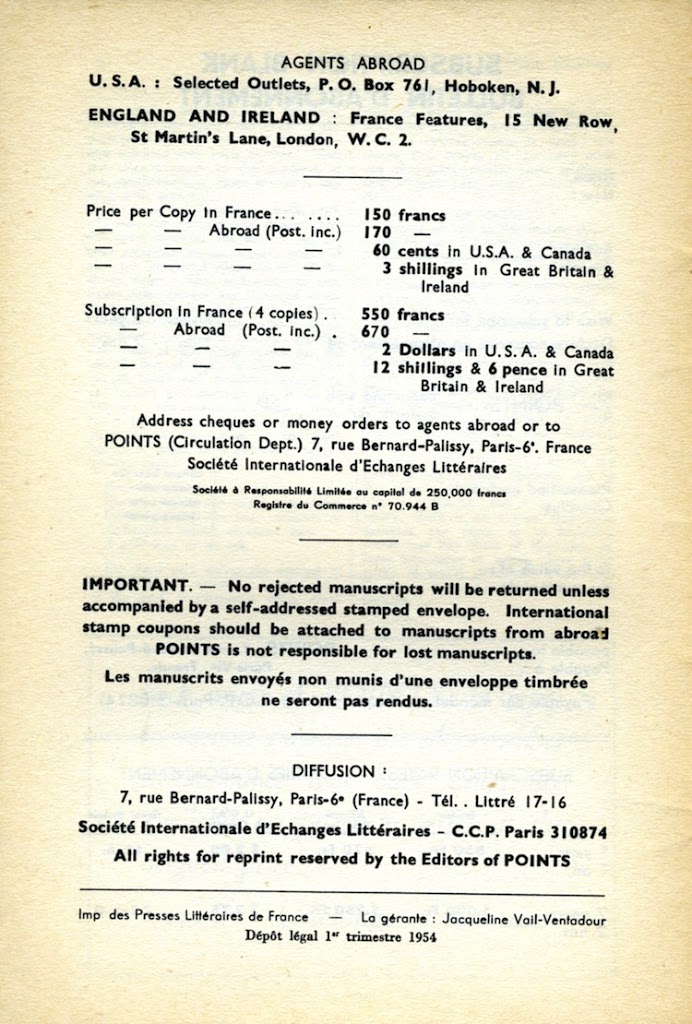 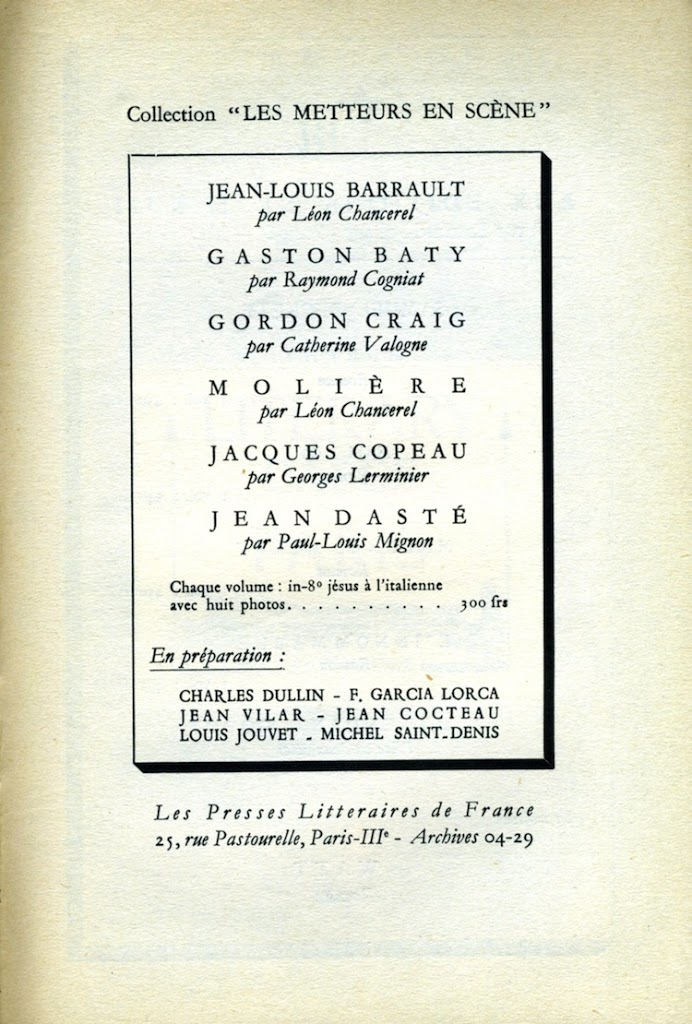 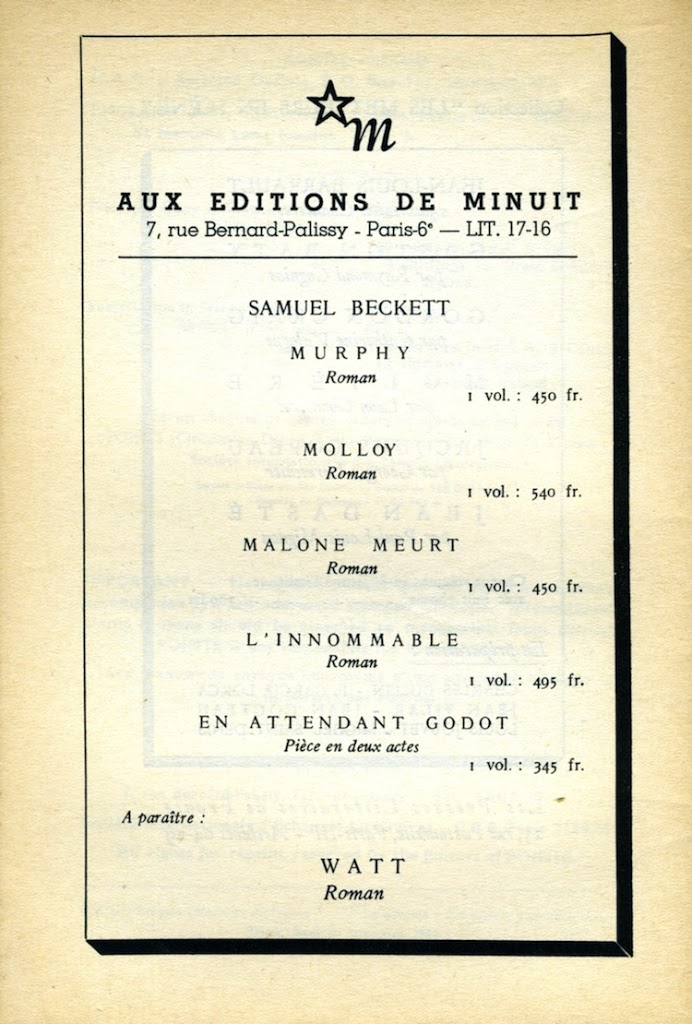 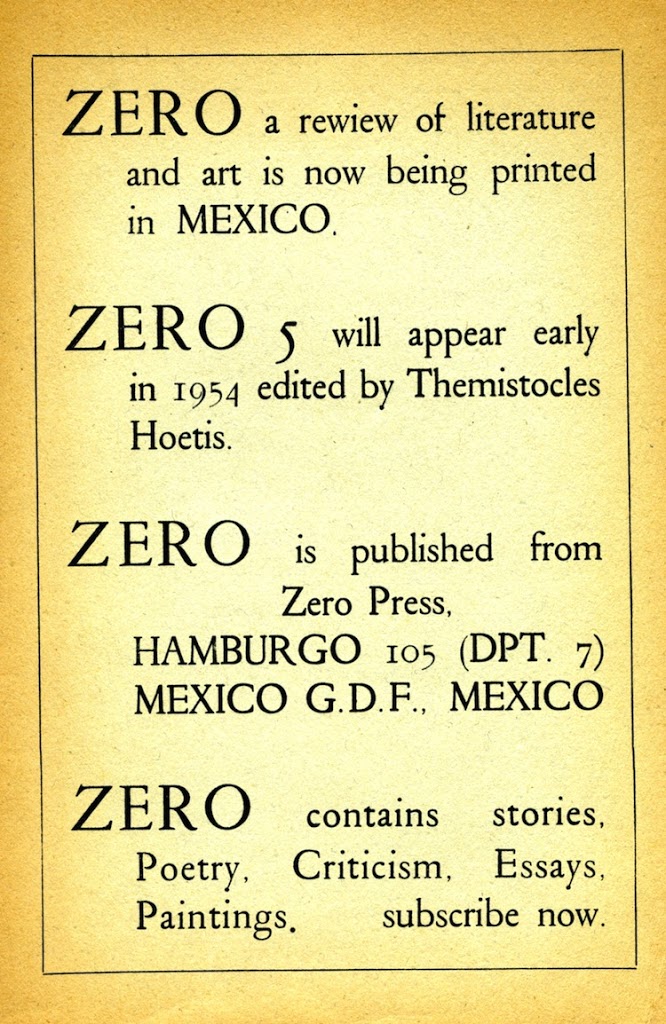 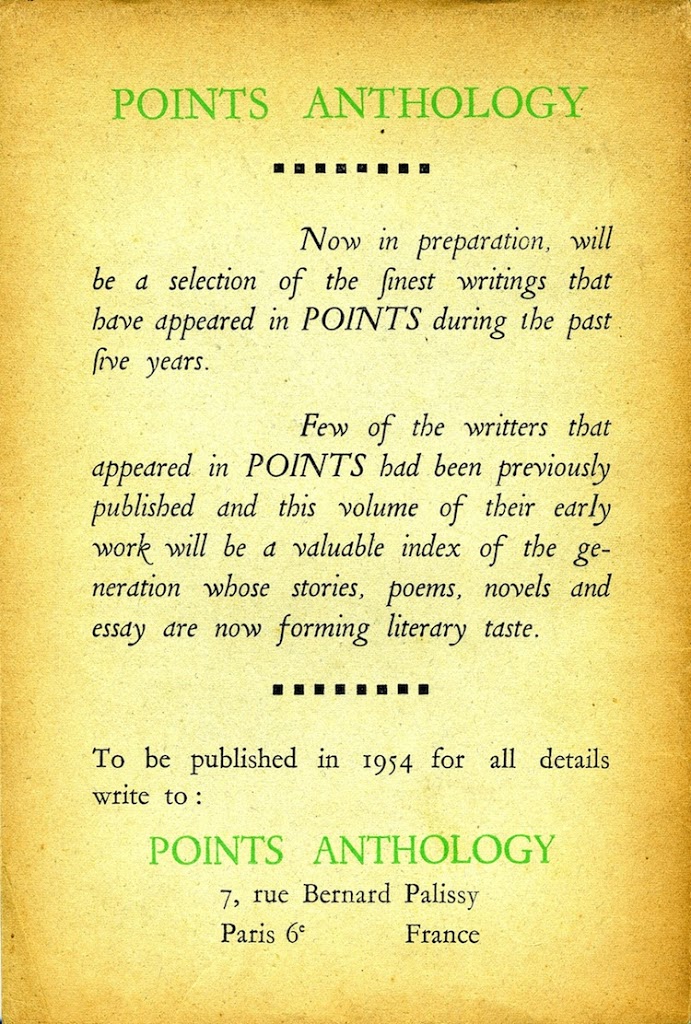 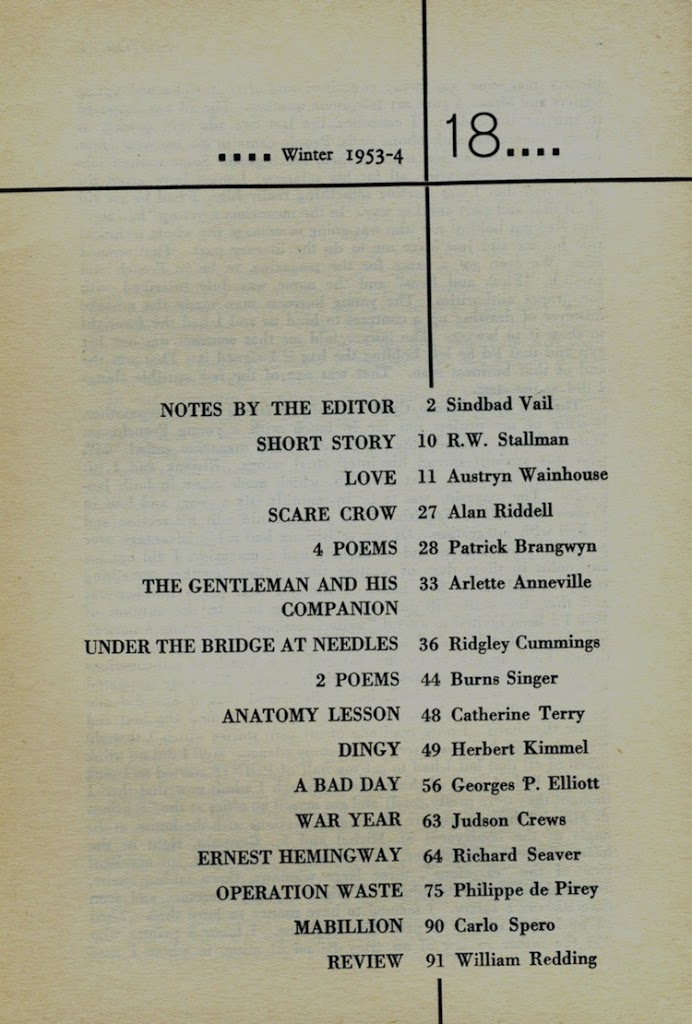 
Once again, lamentably, this issue of POINTS did not have a page devoted to short biographical information on the contributors.  It appears that R. W. Stallman (Robert Wooster Stallman) became a noted authority on the writings of Stephan Crane.  Austryn Wainhouse had appeared in POINTS previously in issue 11/12.  A Google search will retrieve numerous entries regarding Wainhouse’s literary activities.  Alan Riddell (Riddel) had poems published previously in POINTS 15 & 17.  Patrick Brangwyn also had poems published in POINTS 17.  The southern California setting of UNDER THE BRIDGE AT NEEDLES would seem to tie the author, Ridgley Cummings, to a newspaperman of the same name who is mentioned in Lionel Rolfe’s LITERARY L.A. (Chronicle Books, 1981). Herbert Kimmel’s short story, UNION SQUARE, was published in POINTS 16. Kimmel worked for the Los Angeles civil court system before taking a position as a guard at the Sheriff’s Honor Farm, the background of his story in this issue, DINGY.  While in Los Angeles working on his doctorate in Experimental Psychology at USC he founded Outpost Productions and Jazz:West Records releasing seminal albums by Jack Sheldon, Art Pepper and Kenny Drew among others.  Richard Seaver’s years in Paris form the basis of the first half of his posthumous memoir, THE TENDER HOUR OF TWILIGHT (Farrar, Strauss & Giroux, 2012).  He shared his critical piece on Ernest Hemingway with the author’s son, Patrick, who encouraged Seaver to send a copy to his father in Cuba, giving Seaver Hemingway’s address there. In Seaver’s own words:
“After reading the piece, which I had called “Ernest Hemingway: The Inner Good Feeling” – the subtitle taken from his definition “what is moral is what you feel good after” – Pat handed it back to me and said he thought it a damn good job, though he disagreed with my assessment of For Whom The Bell Tolls, my least favorite of the opus. “You should send it to my father,” he said. “I’m sure he’d like it.”
“Pat gave me Papa’s address in Cuba, with the request I not give it out in turn.  I promised I wouldn’t. Back in Paris in the fall, I reread what I’d written, found I liked it far less than I remembered, and never sent it on. I probably should have, for at one-and-twenty I had a boundless, probably excessive, admiration for the man and his razor-lean prose, but I have always found communication with famous people difficult. My problem. Oddly, several years later, when my new Paris friend George Plimpton, another Papa fan, read a shortened version in Sindbad Vail’s POINTS, his first reaction was “You should send this to Papa.”  Later, George interviewed Hemingway for The Paris Review, and the two became friends.  In another life, I’ll put such reluctance behind me and steam boldly forward, as George did instinctively, as if it were his birthright – which it doubtless was.”

Sindbad Vail departed from his “short story” fiction only publication credo by including Philippe de Pirey’s Operation Waste in POINTS 18.  Pirey was a young French paratrooper and recounts his experience in Indo-China and the campaign against the civilian population.  A second segment of Operation Waste would be published in POINTS 19. 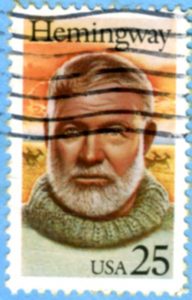 © The Estate of Richard Seaver