POINTS 17
POINTS 17 was published in the autumn of 1953.  Sindbad Vail made a number of changes to the journal with this issue.  The cover displayed the authors and titles of most of the contents of the issue, the inside front and back covers were printed in contrast to previous issues where these were blank, and most notably, title headings for the stories and poems offered some bold and different type fonts, an element of design long overdue.
The editor of merlin, Alexander Trocchi, and the publisher of merlin, Jane Lougee, were featured contributors.  Daniel Mauroc and Alan Riddel had pieces published in POINTS 15.  Patrick Bowles had also appeared previously in POINTS 13.  The short biographical information on new contributors that had been a feature of previous issues was absent from POINTS 17, but we have included some information on Trocchi and Vanderwal at the end of this post. 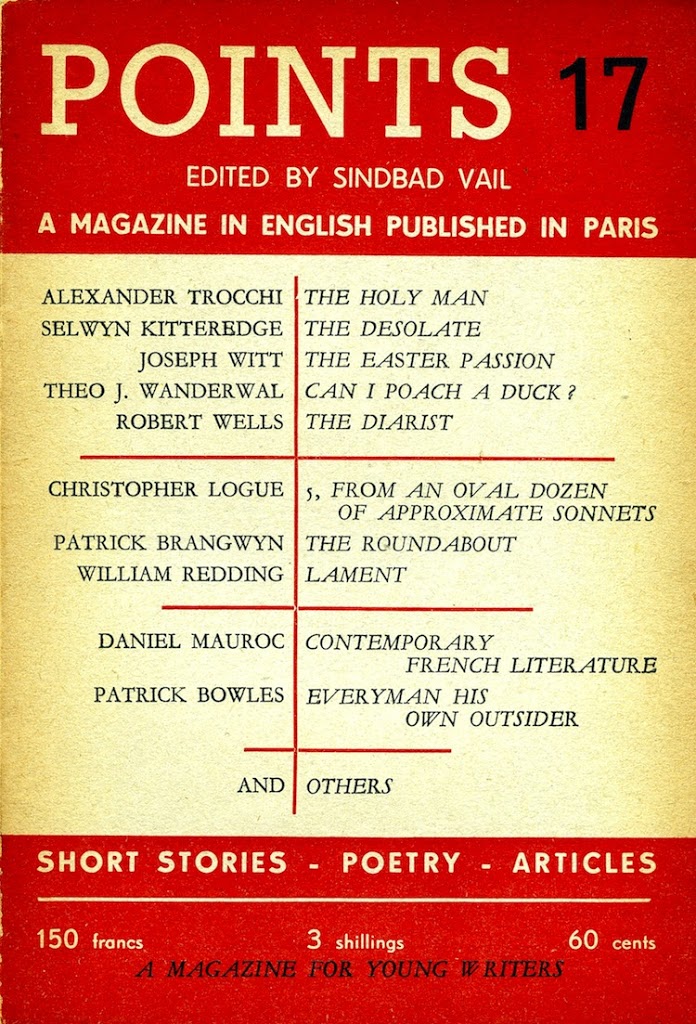 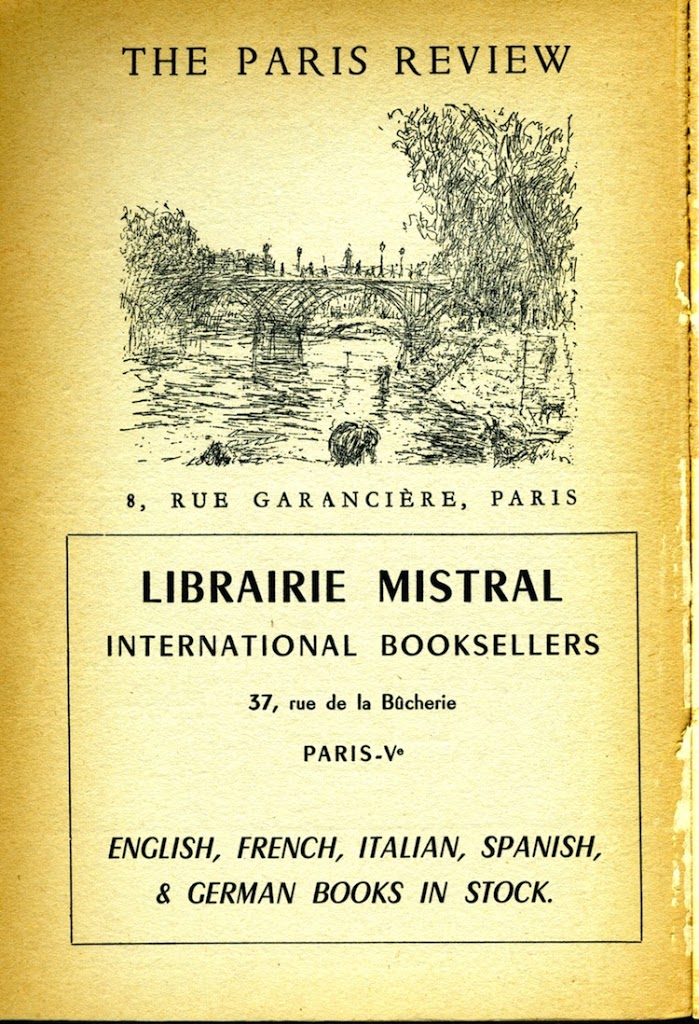 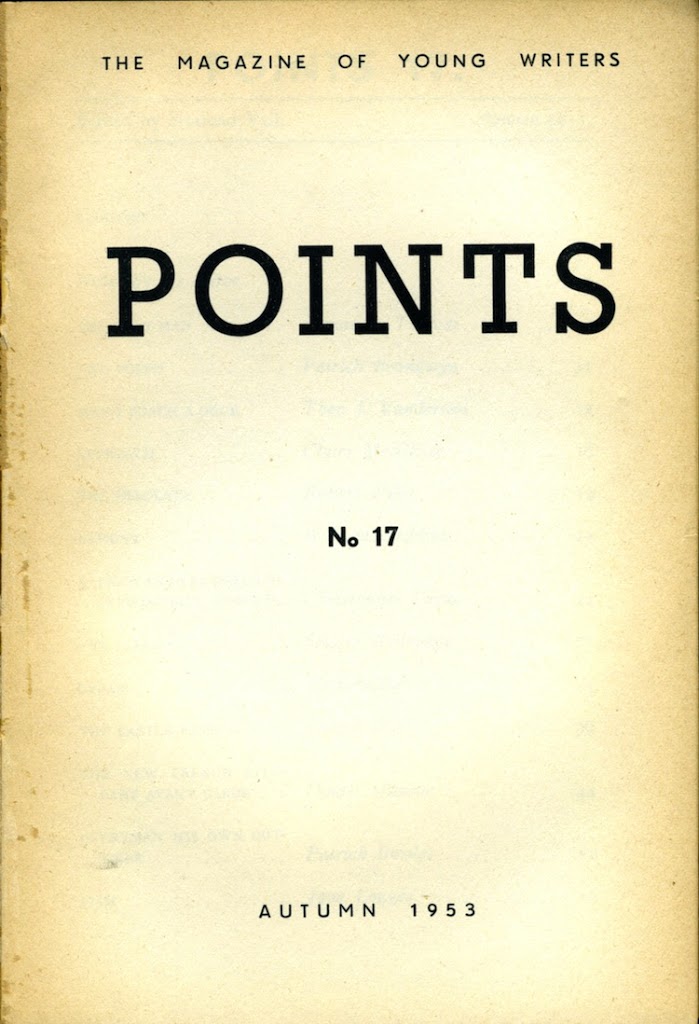 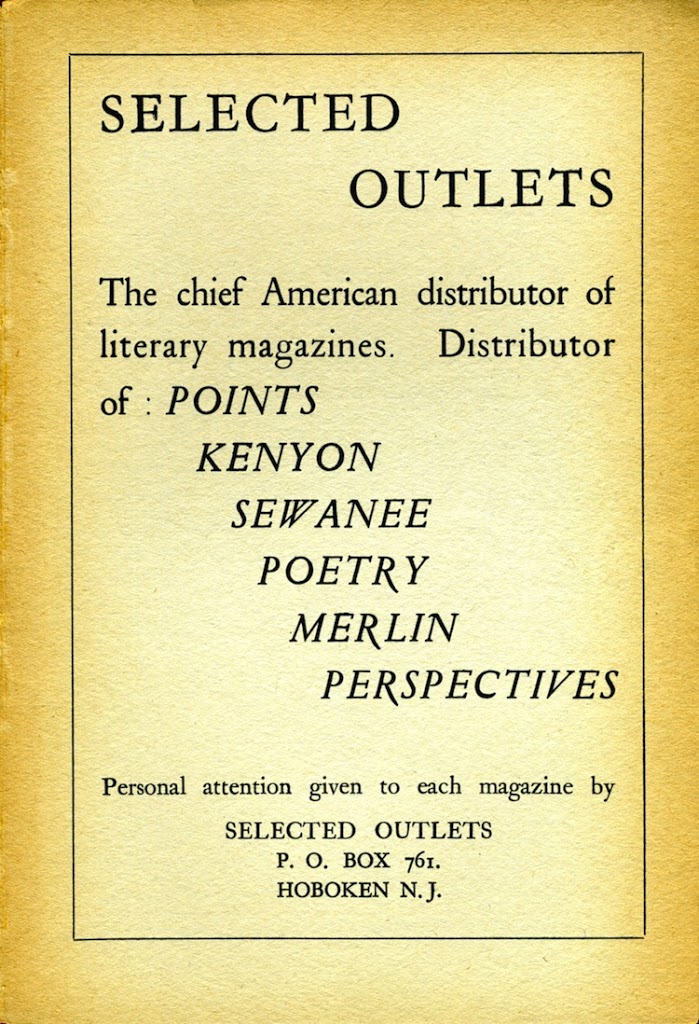 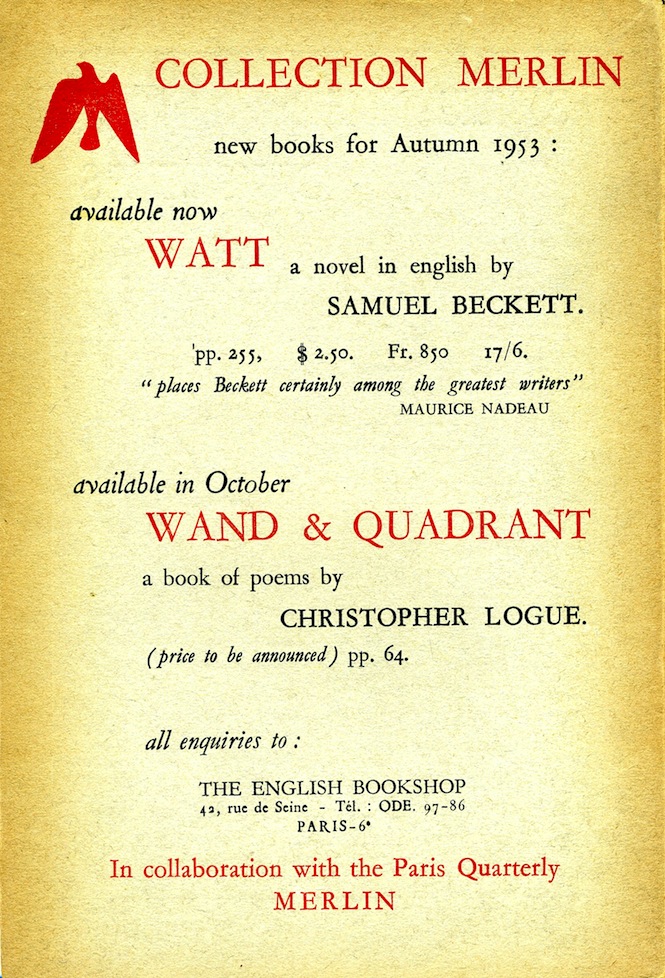 (back cover)
Advertisements and subscription pages 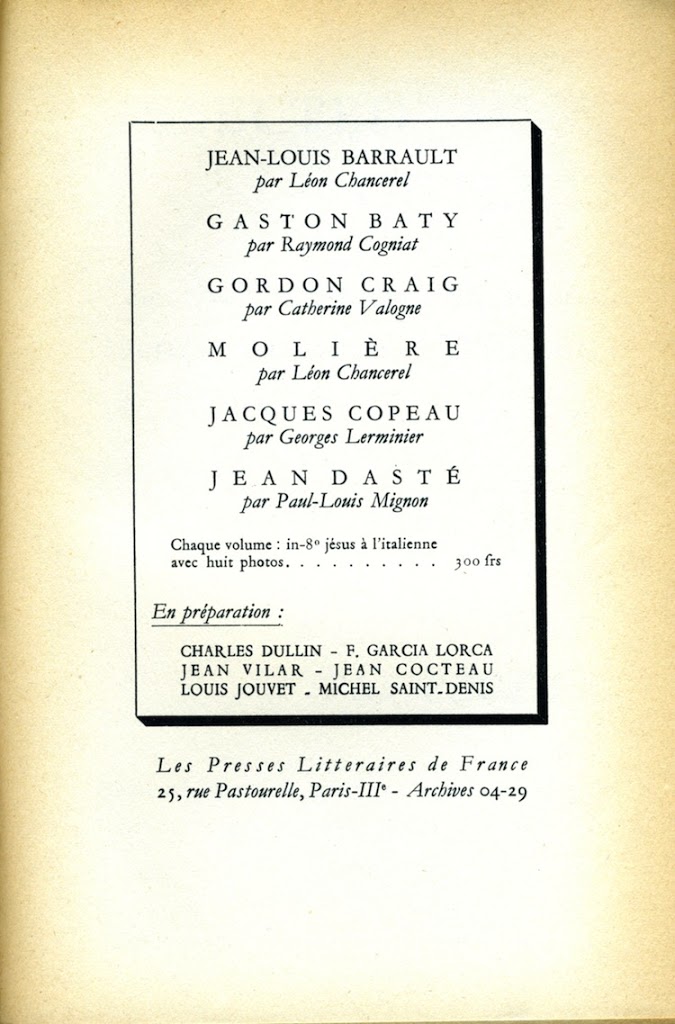 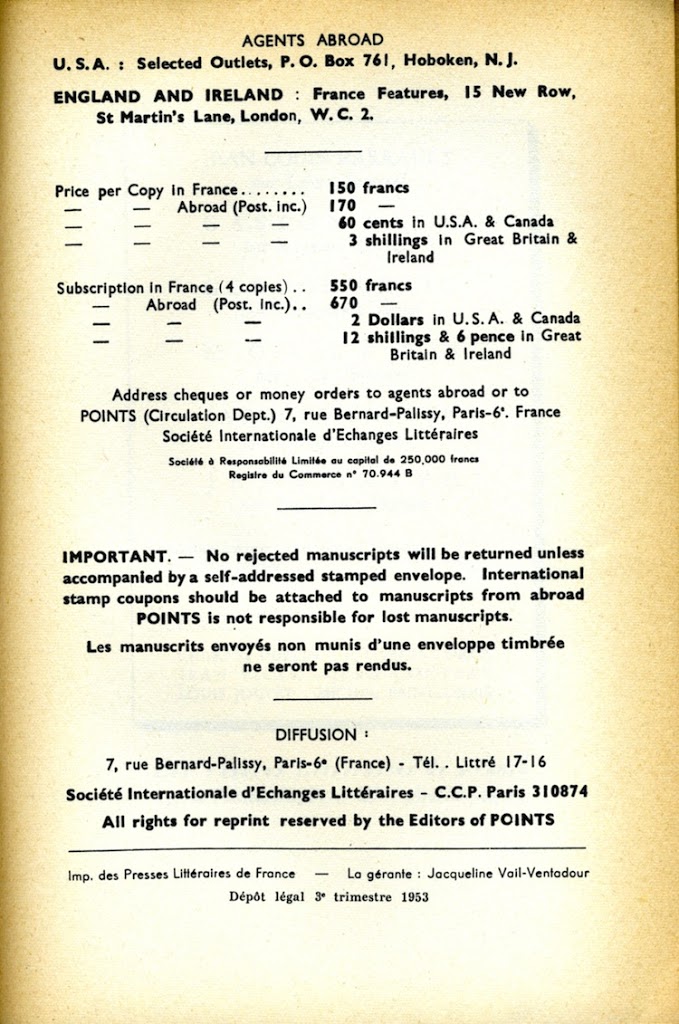 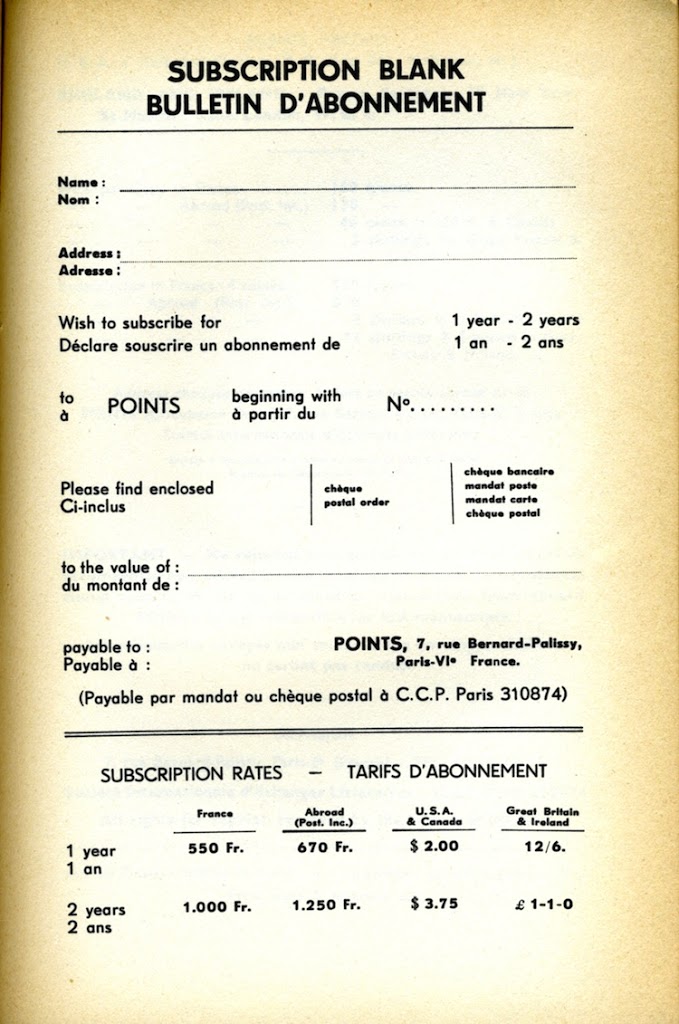 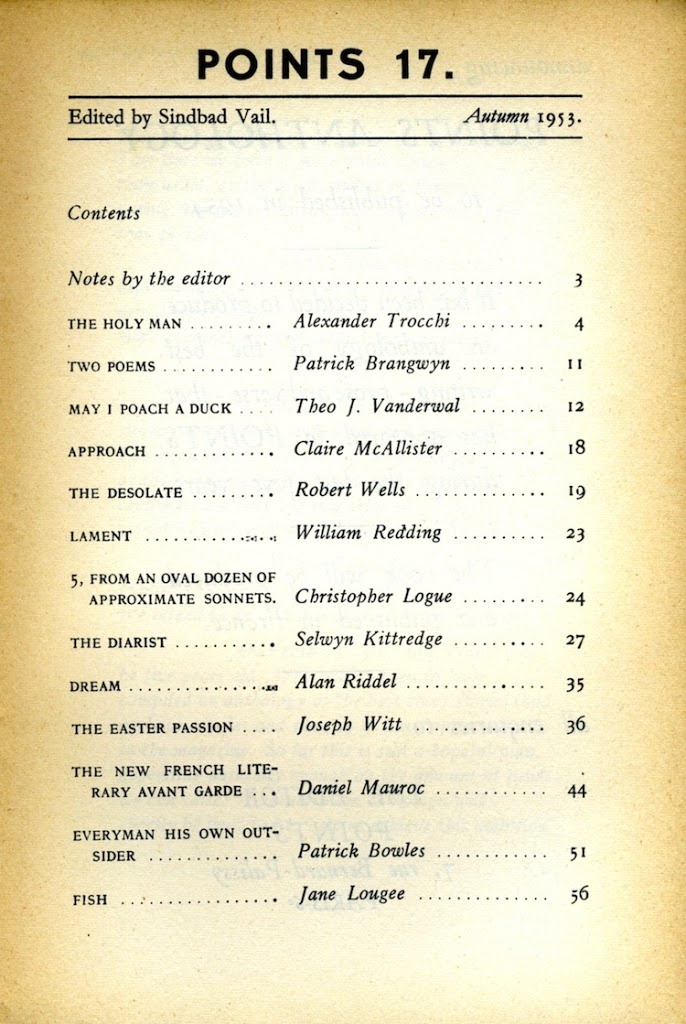 Contents
Notes by the editor – Sindbad Vail
THE HOLY MAN – Alexander Trocchi
TWO POEMS – Patrick Brangwyn
MAY I POACH A DUCK – Theo J. Vanderwal
APPROACH – Claire McAllister
THE DESOLATE – Robert Wells
LAMENT – William Redding
5, FROM AN OVAL DOZEN OF APPROXIMATE SONNETS – Christopher Logue
THE DIARIST – Selwyn Kittredge
DREAM – Alan Riddel
THE EASTER PASSION – Joseph Witt
THE NEW FRENCH LITERARY AVANT GARDE – Daniel Mauroc
EVERYMAN HIS OWN OUTSIDER – Patrick Bowles
FISH – Jane Lougee
NOTES BY THE EDITOR
This issue of POINTS is again late in appearing. This time we have a more valid excuse than usual, as the great strikes in France during August, curtailed almost all activities for
that period.
In this issue we are again experimenting with the cover. It is hoped that the new design will be more explanatory, and attract more readers.
We have in this number five short stories, more poems than usual and two articles. The book review section has been omitted, as the books we receive are usually too old to review by the time the magazine is actually distributed in Paris and especially in the U.S.
We are continuing our policy of publishing works of young and usually unknown writers. We intend to do so as long as the magazine exists.
On February 15th, 1954, Points will be five years old. We hope by then to have compiled an anthology of the best short stories (and perhaps articles and poems) to have appeared in the magazine. So far this is still a hopeful plan, depending naturally enough on the amount of funds we can raise. A subscription campaign will shortly be launched to help us achieve this ambition.
SINDBAD VAIL
Some examples of the title headings in this issue of POINTS: 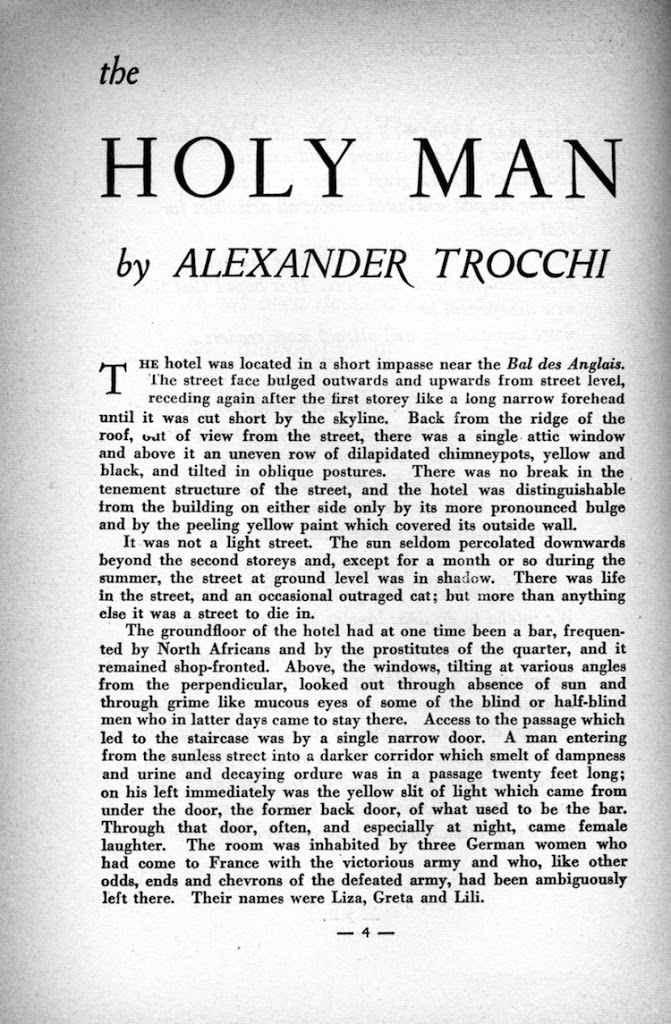 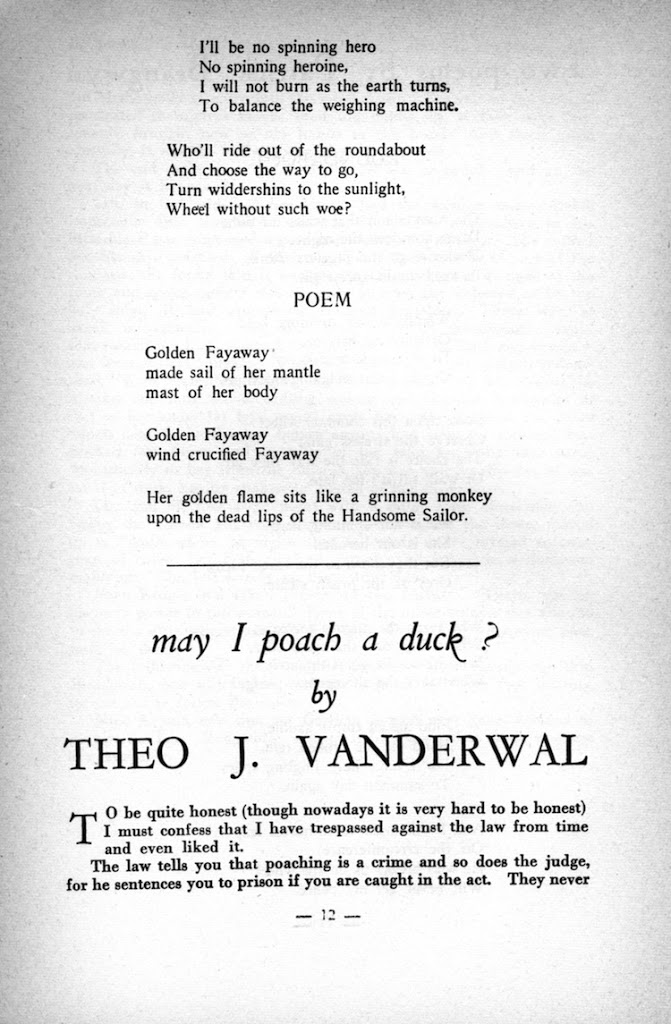 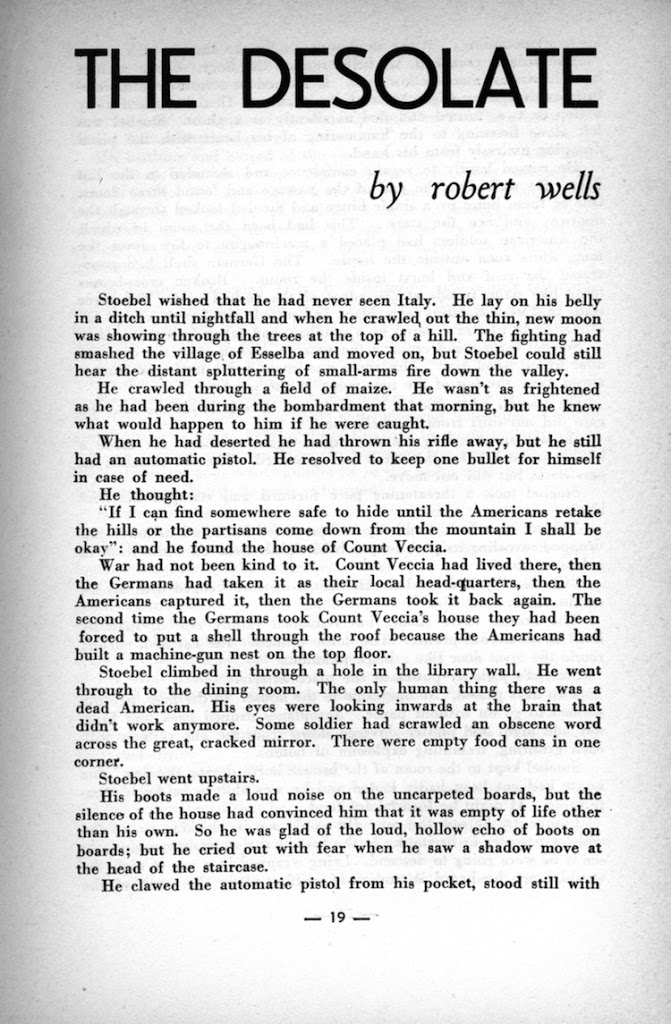 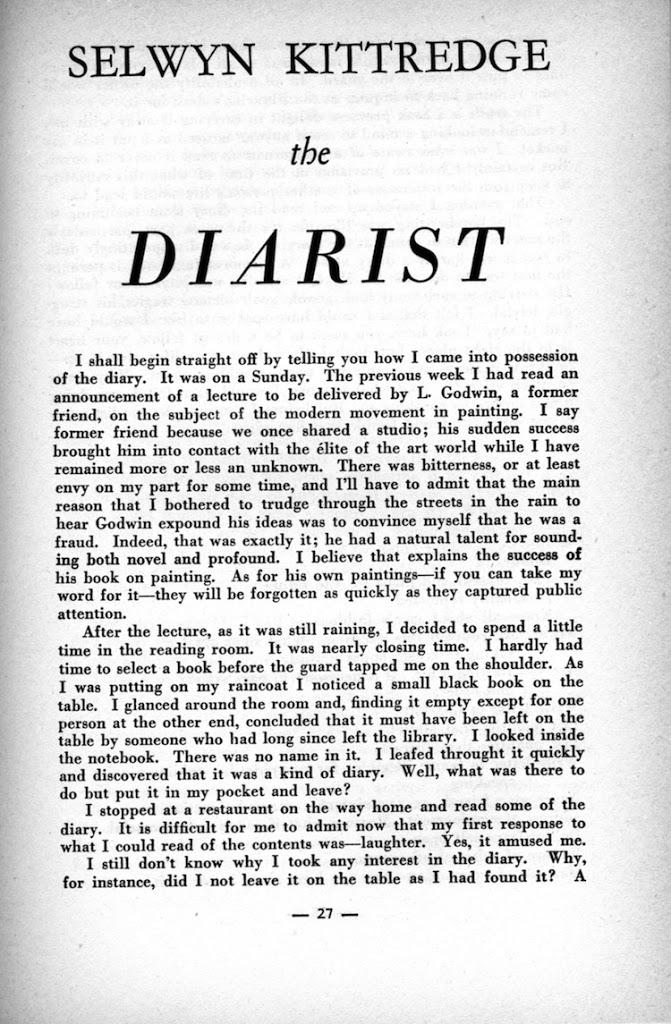 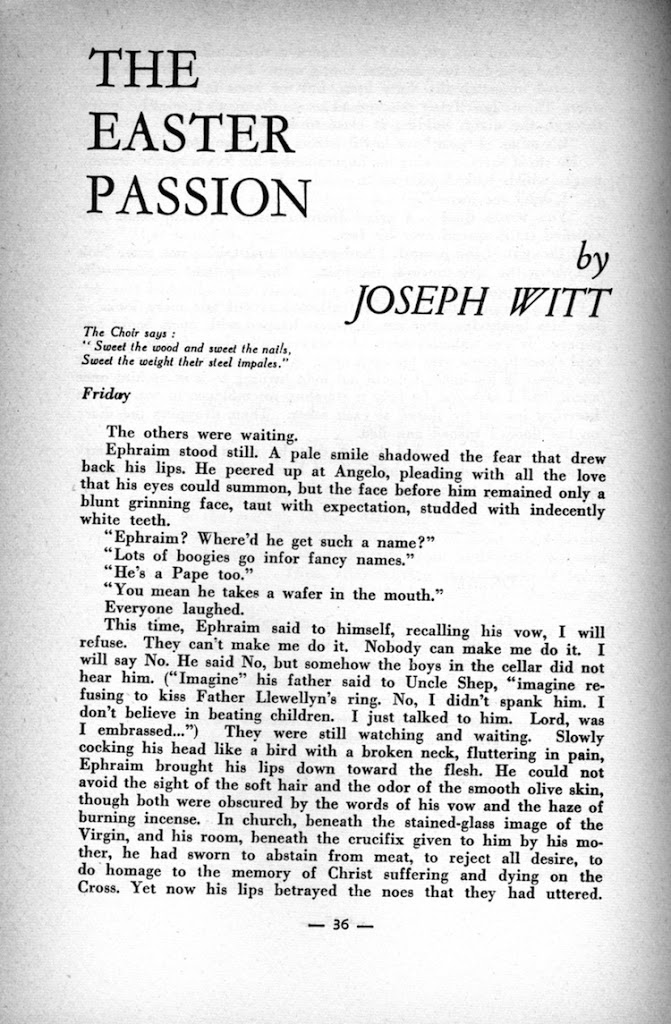 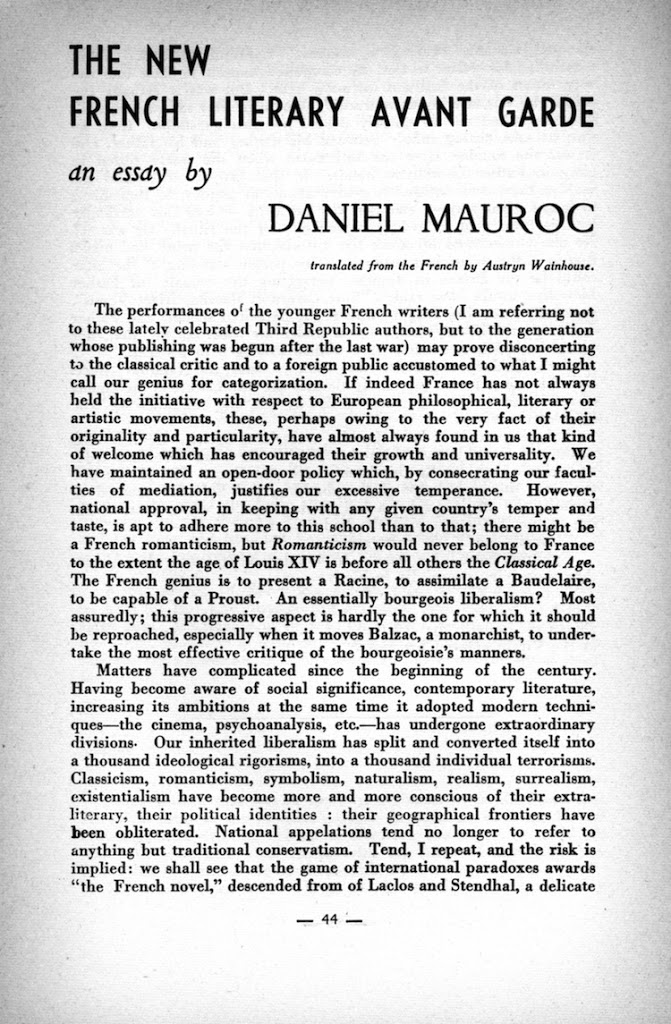