merlin
The literary landscape of Paris shifted considerably with the arrival of The Paris Review and merlin.  POINTS had been a “no frills” endeavor by Sindbad Vail, gathering short stories submissions that he liked and taking them to the printer when he had enough to fill out the designated pages of each issue.  Elements of design were left to the printer, which is to say, there were none.
merlin had a designer who selected the type fonts and conceived the layout of each issue, engaged an artist to provide drawings to break up the text and add design elements and lastly, but most importantly, merlinhad an advisory editor who elevated the literary quality of the journal to rank it alongside the finest being published.  Richard Seaver was preparing for his doctorate degree at the Sorbonne.  He was fluent in French, wrote and spoke French with ease, the perfect choice to shepherd merlin as it emerged on the Paris literary scene.  Seaver would remain in the publishing world when he returned to America, most notably as editor at Grove Press where he was instrumental in bringing his Paris writers to the American public, Samuel Beckett, Jean Genet, Eugene Ionesco among others.
The remaining four issues of POINTS to be published over the next two years would see a change in front cover design and a slight upgrade in paper stock.  The retail price in Paris would remain the same, 150 francs per issue.  The new arrival on the block. merlin,  was priced at 250 francs.
Commentary © James A. Harrod, COPYRIGHT PROTECTED; ALL RIGHTS RESERVED 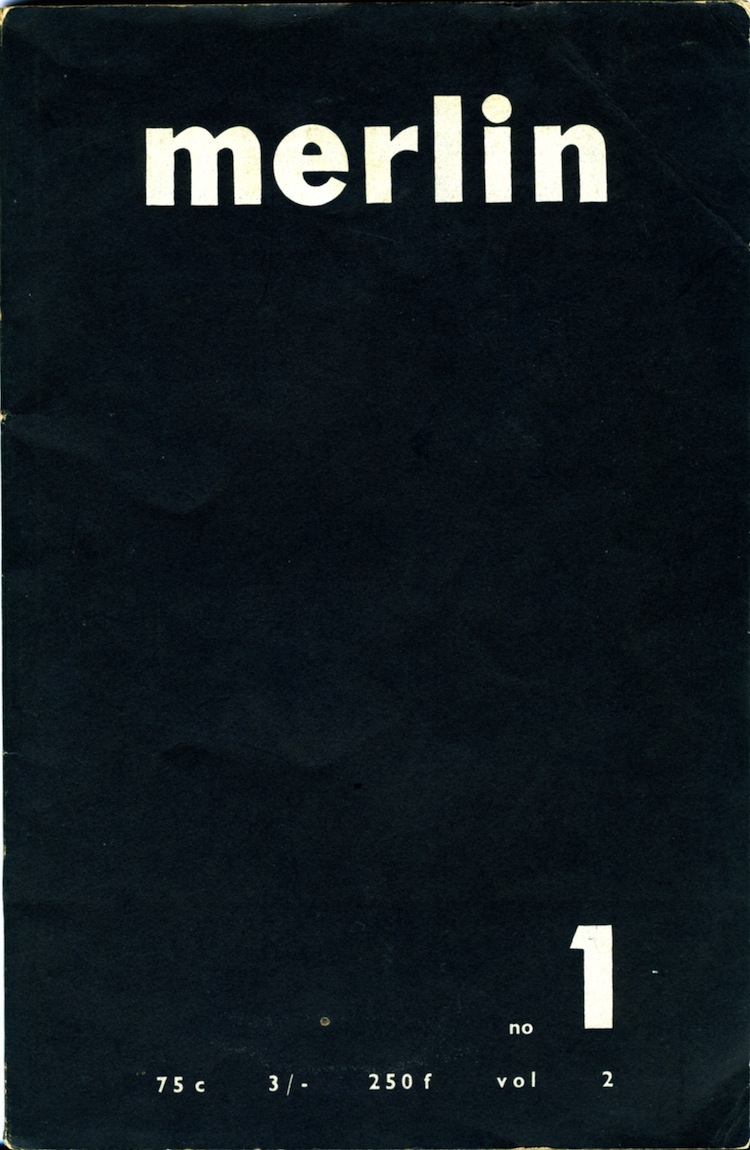 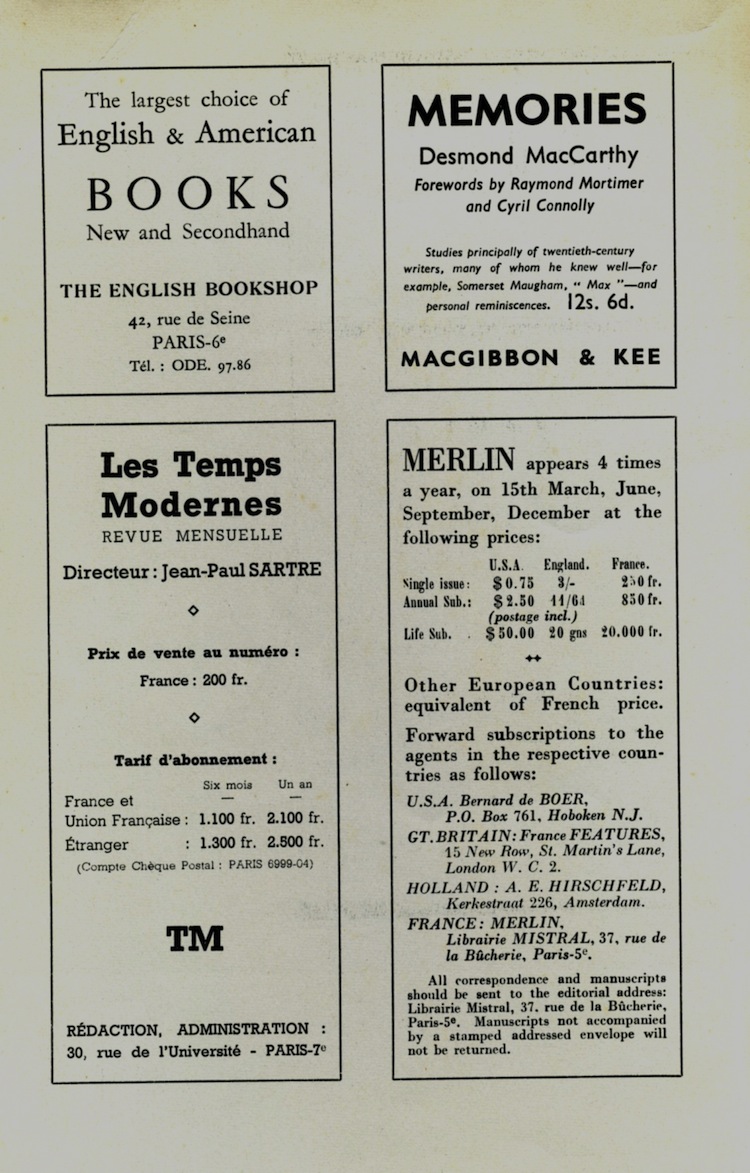 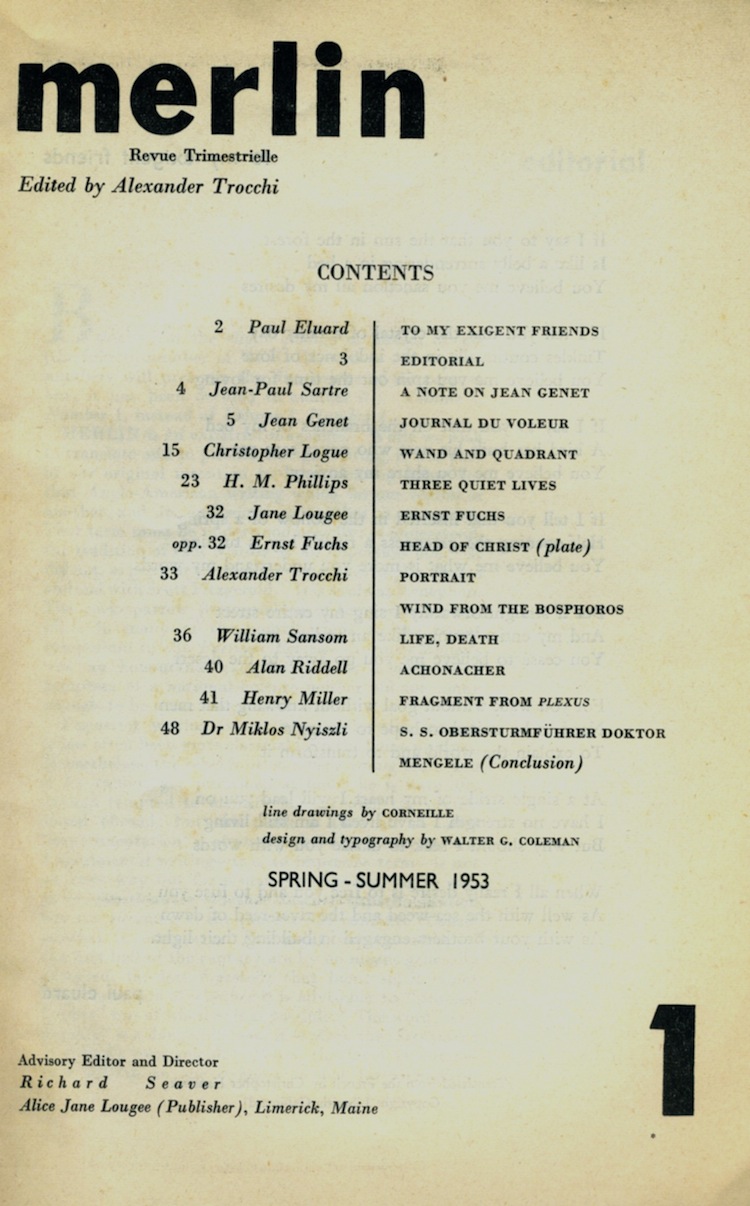 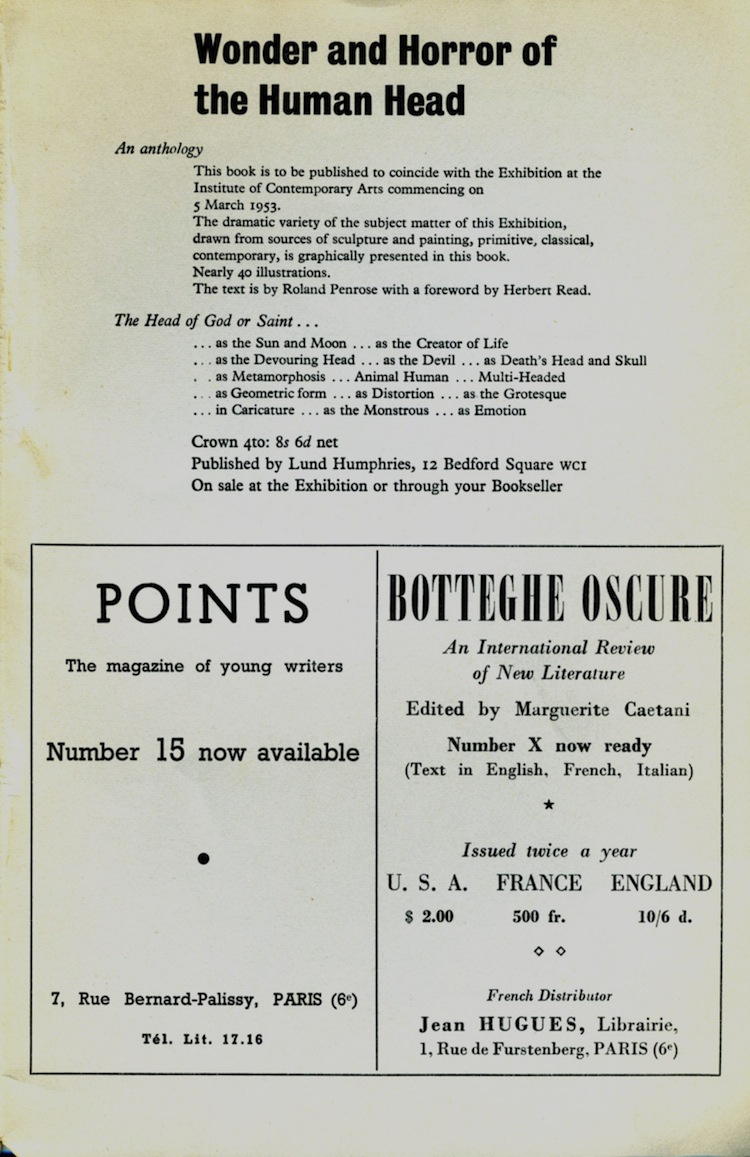 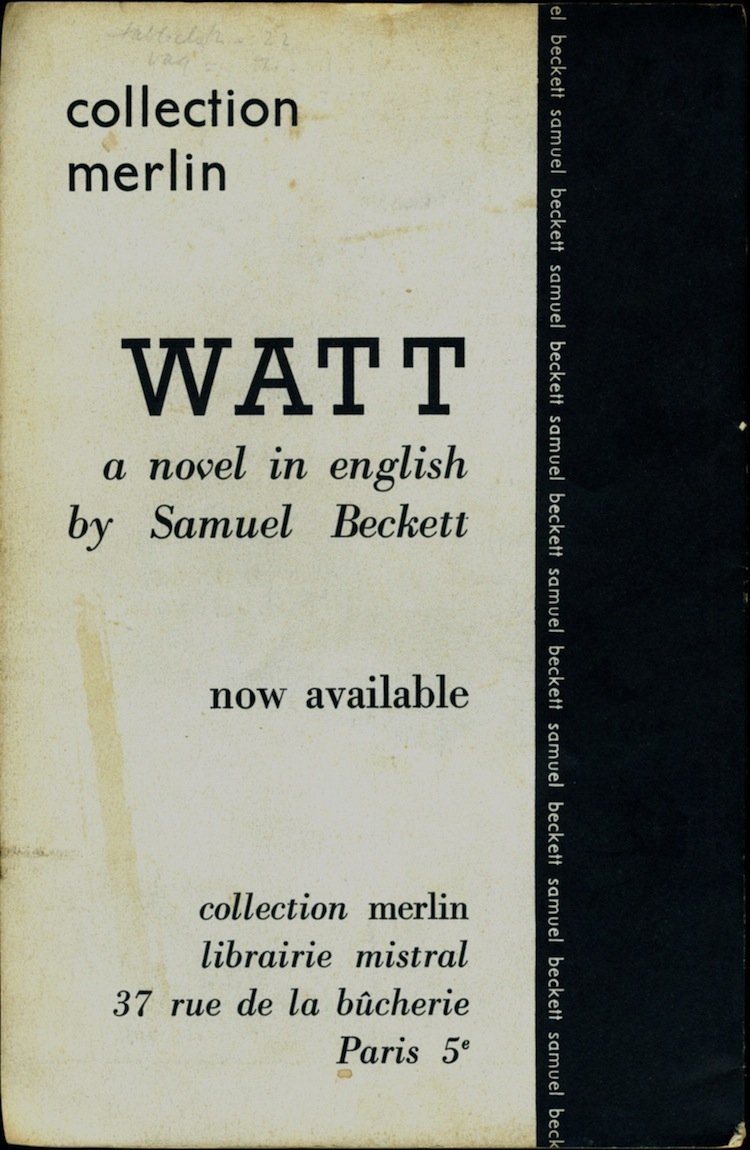 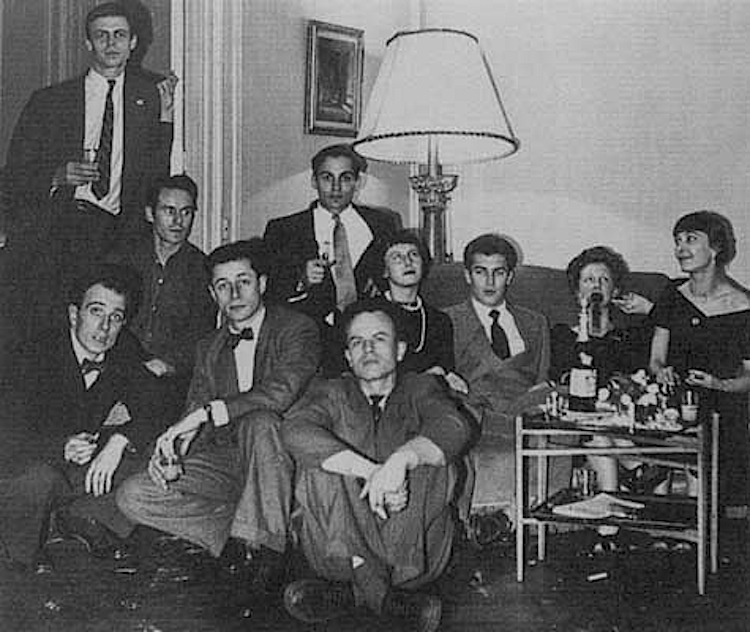 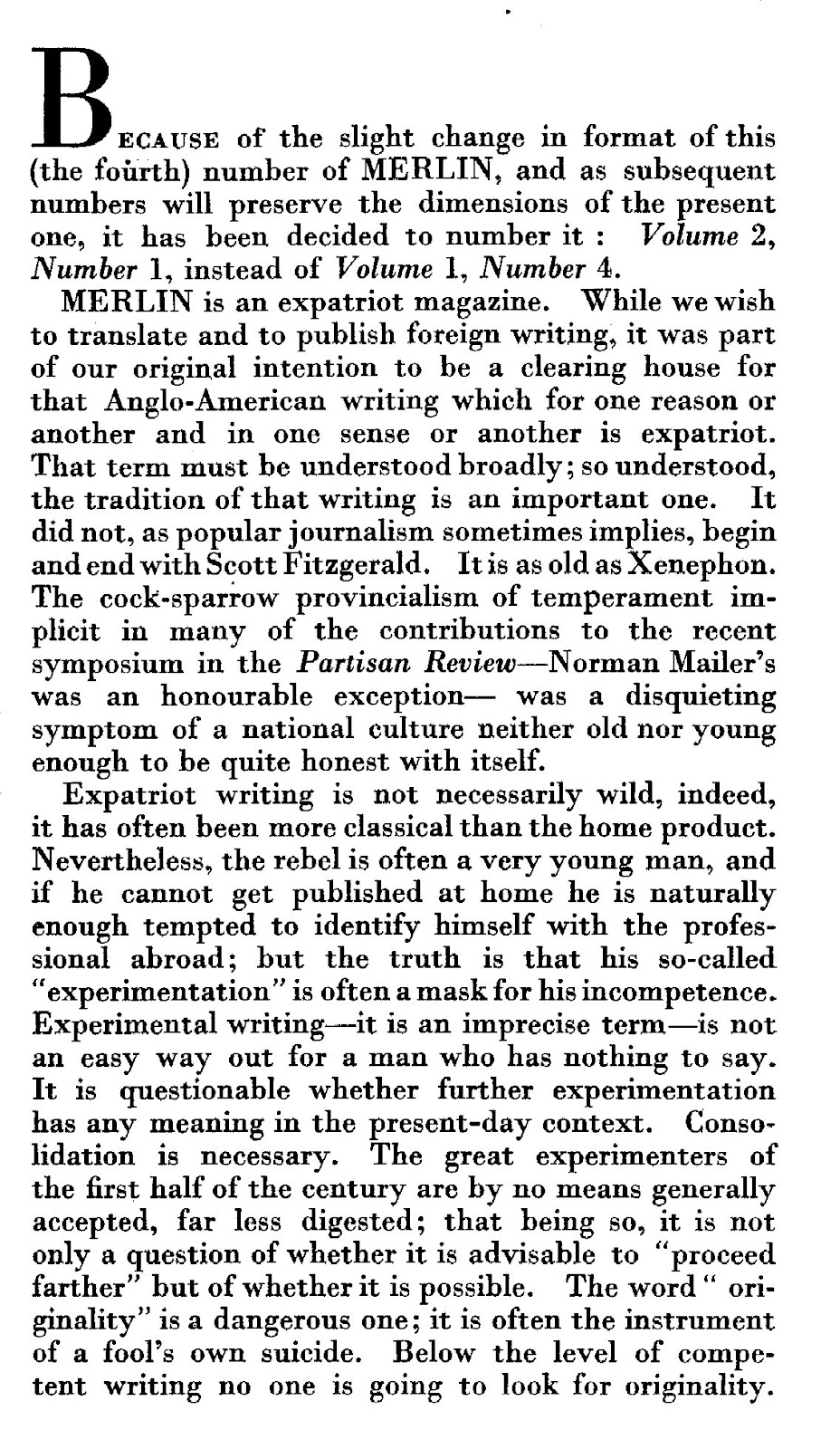 Editorial
BECAUSE of the slight change in format of this (the fourth) number of MERLIN, and as subsequent numbers will preserve the dimensions of the present one, it has been decided to number it :Volume 2, Number 1, instead of Volume 1, Number 4.
MERLIN is an expatriot magazine. While we wish to translate and to publishforeign writing, it was part of our original intention to be a clearing house for that Anglo-American writing which for one reason or another and in one sense or another is expatriot. That term must be understood broadly; so understood, the tradition of that writing is an important one. It did not, as popular journalism sometimes implies, begin and end with Scott Fitzgerald. It is as old as Xenephon. The cock–sparrow provincialism of temperament implicit in many of the contributions to the recent symposium in the Partisan Review—Norman Mailer’s was an honourable exception— was a disquieting symptom of a national culture neither old nor young enough to be quite honest with itself.
Expatriot writing is not necessarily wild, indeed, it has often been more classical than the home product. Nevertheless, the rebel is often a very young man, and if he cannot get published at home he is naturally enough tempted to identify himself with the professional abroad; but the truth is that his so-called “experimentation” is often a mask for his incompetence. Experimental writing—it is an imprecise term—is not an easy way out for a man who has nothing to say. It is questionable whether further experimentation has any meaning in the present-day context. Consolidation is necessary. The great experimenters of the first half of the century are by no means generally accepted, far less digested; that being so, it is not only a question of whether it is advisable to “proceed farther” but of whether it is possible. The word “ originality” is a dangerous one; it is often the instrument of a fool’s own suicide. Below the level of competent writing no one is going to look for originality.
Alexander Trocchi
To my exigent friends
If I say to you that the sun in the forest
Is like a belly surrendering in a bed
You believe me you sanction all my desires
If I tell you that the crystal of a rainy day
Tinkles continually in the indolence of love
You believe me you spin out the time for loving
If I say to you that on the branches of my bed
A bird has built his nest who never says yes
You believe me you share my anxiety
If I tell you that inserted in the hollow of a spring
Half-opening the greenness a river’s key is turning
You believe me what is more you understand my words
But if straightforwardly I sing my entire street
And my entire country like an endless street
You cease to believe me you go away to the desert
For you walk without goal without knowing that men
Need to be united to hope to struggle
To explain the world and to transform it
At a single stride of my heart I will lead you on
I have no strength I have lived I am still living
But why should I seek to dazzle you with words
When all I really desire is to free you and to fuse you
As well with the sea-weed and the river-reed of dawn
As with your brothers engaged in building their light.
Paul Eluard
[Translated from the French by Christopher Hancock
Copyright Libiairie Gallimard] 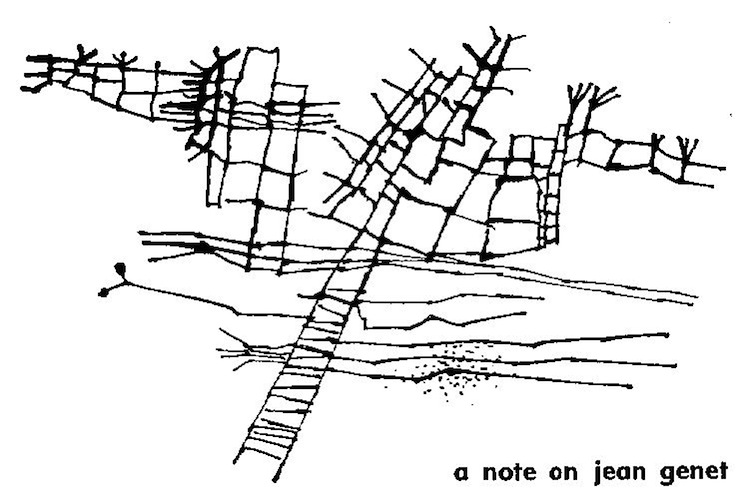 NOT all who would be are Narcissus. Many who lean over the water see in it only a vague human figure. Genet sees himself everywhere; the dullest surfaces reflect his image; even in others he perceives himself, thereby bringing to light their deepest secrets. The disturbing theme of the double, the image, the counterpart, the enemy brother, is found in all his works.
Each of them has the strange property of being both itself and the reflection of itself. Genet brings before us a dense and teeming throng which intrigues us, transports us and changes into Genet beneath Genet’s gaze. Hitler appears, talks, lives; he removes his mask : it was Genet. But the little servant-girl with the swollen feet who meanwhile was burying her child—that was Genet too. In The Thief’s Journal the myth of the double has assumed its most reassuring, most common, most natural form. Here Genet speaks of Genet without intermediary; he talks of his life, of his wretchedness and glory, of his loves;he tells the story of his thoughts. One might think that, like Montaigne, he is going to draw a good-humored and familiar self-portrait. But Genet is never familiar, even with himself. He does, to be sure, tell us everything. The whole truth, nothing but the truth, but it is the sacred truth. He opens up one of his myths; he tells us, “You’re going to see what stuff it’s made of, “ and we find another myth. He reassures us only to disturb us further. His autobiography is not an autobiography; it merely seems like one; it is a sacred cosmogony. His stories are not stories; they excite you and fascinate you. But you thought he was relating facts and suddenly you realize he is describing rites. If he talks of the wretched beggars of the Barrio Chino, it is only to debate, in lordly style, questions of precedence and etiquette; he is the Saint-Simon of this Court of Miracles. His memories are not memories; they are exact but sacred; he speaks about his life like an evangelist, as a wonder-struck witness. When Edouard, the novelist in Gide’s The Counterfeiters, writes the journal of his novel,he is no longer fictitious. But Genet the novelist, speaking of Genet the thief, is more of a thief than the thief, the thief and his double are alike sacred. Thus, there comes into being that new object: a mythology of the myth (like the blues song that was called The Birth of the Blues); behind the first-degree myths—The Thief, Murder, the Beggar, the Homosexual—one discovers the reflective myths, the Poet,the Saint, the Double, Art. Nothing but myths, then, a Genet with a Genet stuffing, like the prunes of Tours. If, however, you are able to see at the seam the thin line separating the enveloping myth from the enveloped myth, you will discover the truth, which is terrifying. That is why I do not fear to call this book, the most beautiful that Genet has written, the Dichtung und Wahrheit of homosexuality.
jean-paul sartre 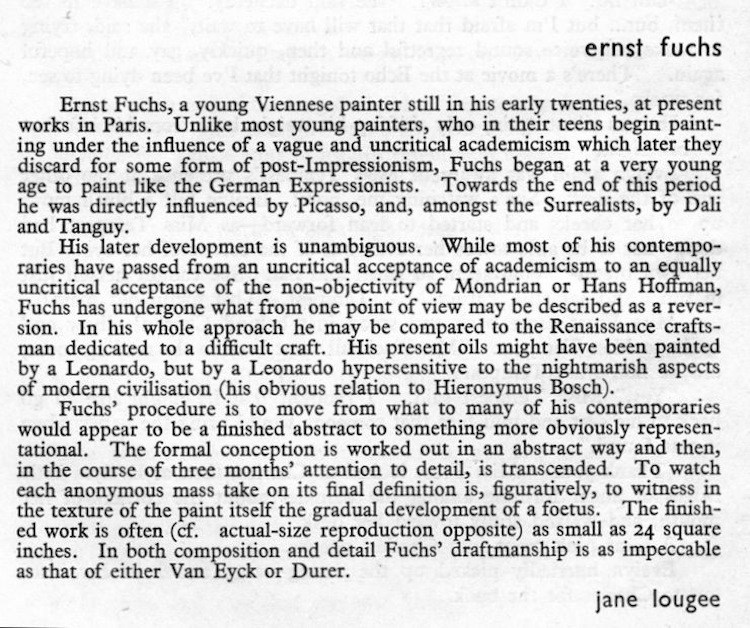 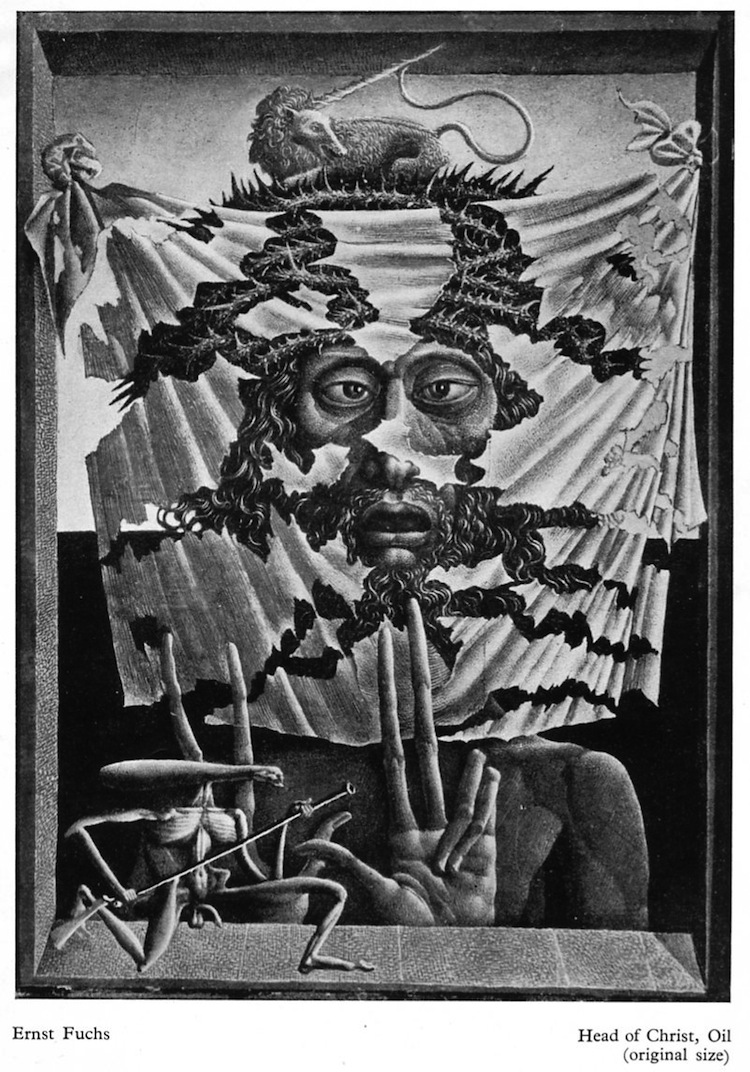 
jean genet
(translated by Bernard Frechtman)
(® Copyright Librairie Gallimard)
* Translator’s note : The term la toilette also refers to certain kinds of wrappings or casings, for example, a tailor’s or dressmaker’s wrapper for garments, as well as to the caul over mutton.
** But what will prevent my destruction? Speaking of catastrophe, I can not help recalling a dream : a locomotive was pursuing me. I was running along the tracks. I heard the machine puffing at my heels. I left the rails to run into the countryside. The locomotive cruelly pursued me, but gently and politely it stopped in front of a small and fragile wooden gate which I recognized as one of the gates which closed a meadow belonging to my foster-parents and where, as a child, I used to lead the cows to pasture. In telling a friend about this dream, I said, “… the train stopped at the gate of my childhood… “
Readers who have visited this blog and share an interest in the Paris literary scene are encouraged to acquire and read Richard Seaver’s excellent memoir of his years in Paris, The Tender Hour of Twilight, Farrar, Straus, & Giroux. 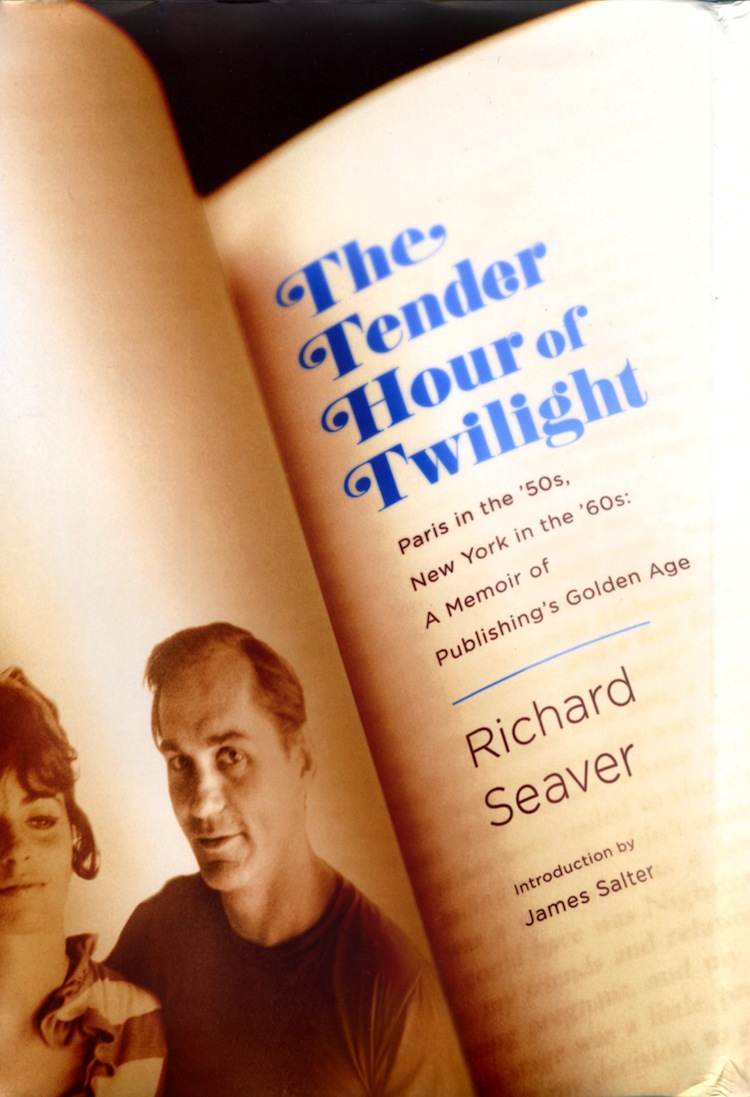 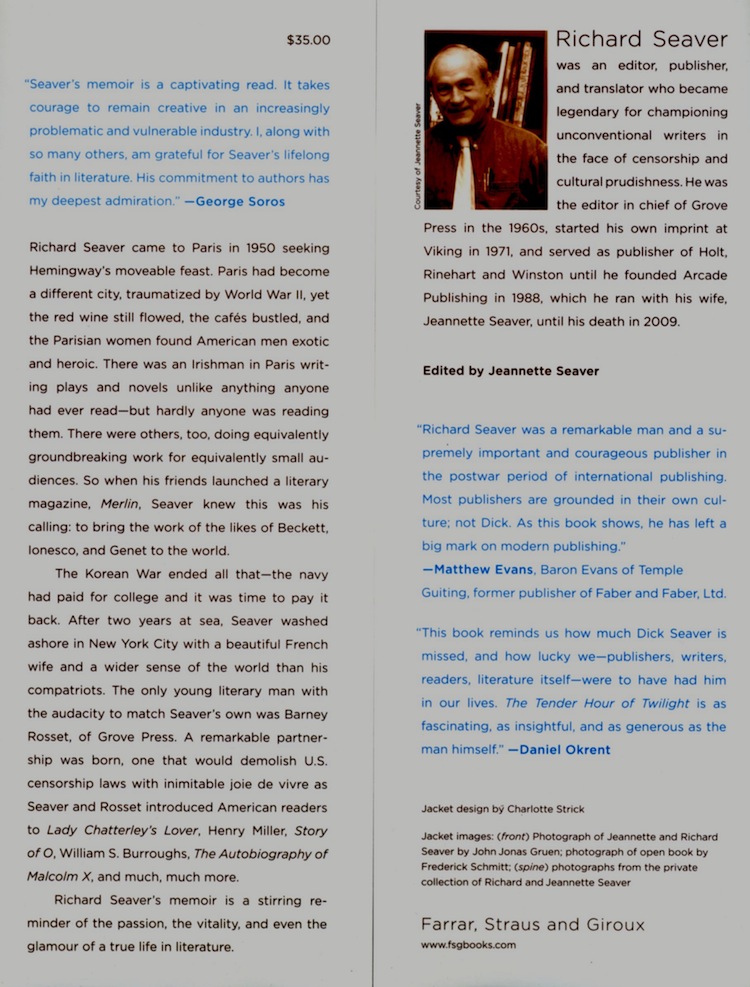 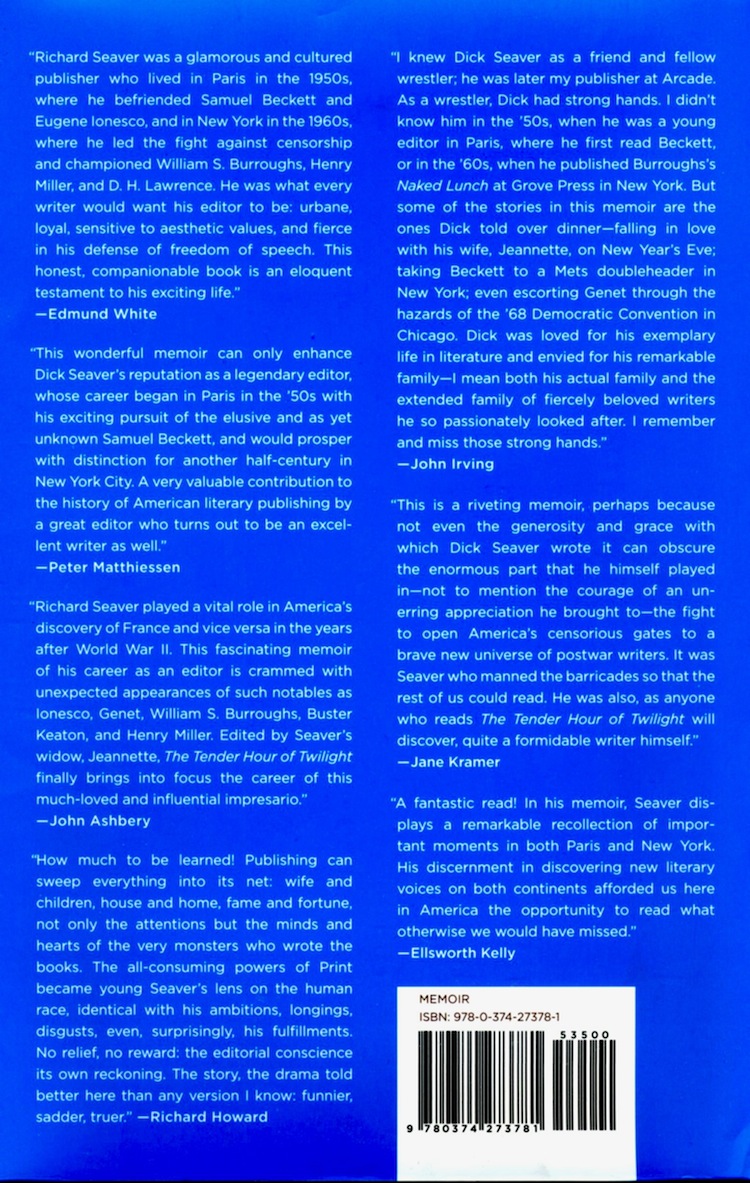 I urge you to visit your local neighborhood independent bookseller and purchase a copy.
Commentary © James A. Harrod, COPYRIGHT PROTECTED; ALL RIGHTS RESERVED