POINTS 14 appeared in the summer of 1952.  Readers who have been following this blog from the beginning will notice that issues one through seven featured pale yellow covers with the title printed in various colors.  This changed with POINTS 9 that had a pale blue cover and then POINTS 10 that sported a bright red cover whose ink unfortunately had not dried completely when issues went out to distributors with many readers writing in to complain of smudges, etc.  POINTS 11/12 and POINTS 13 both had covers in the blue family.  POINTS 14 returned to the familiar yellow cover with the title text printed in a deep red color. 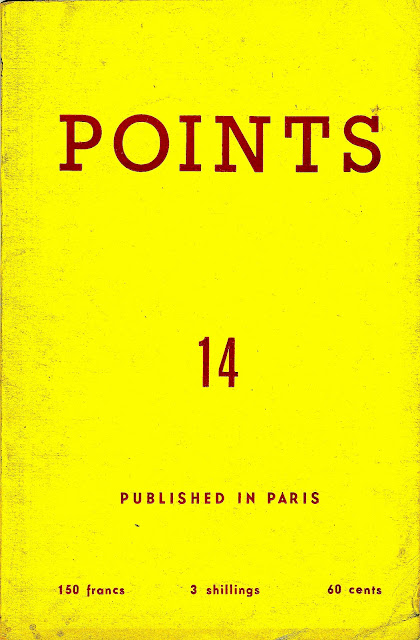 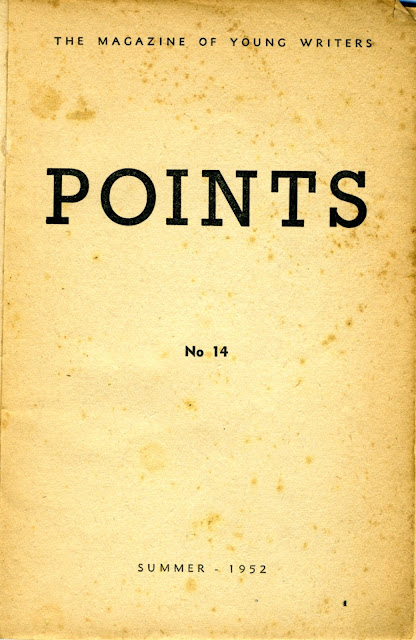 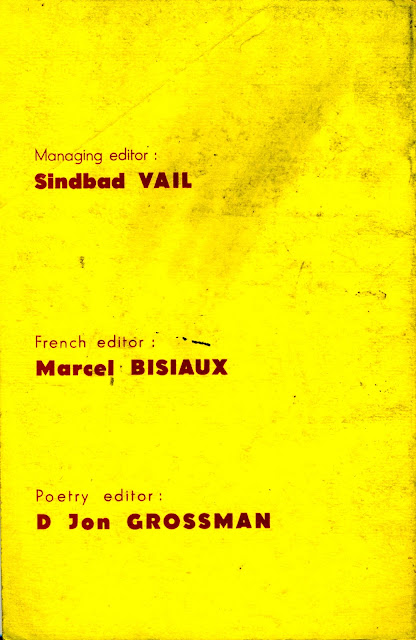 NOTES BY THE EDITOR

Another POINTS (No. 14) is out in mid summer as promised. We feet quite smug.
This number is, we think, as interesting and varied as its predecessors. Again we have published writers from all over the world; Ireland, England, France, the U.S. and New Zealand are represented. We have given our favourite D. Jon Grossman a week earned rest, but it is hoped that he will re-appear in a future number.  Instead we have discovered a really “young” writer in Matthew Mugg who is not yet fifteen years old.
The book review section this time is unfortunately shorter than usual. Less interesting books hove been sent to us than usual, but that is more or less to be expected in summer. We hope that Miss Jane Pene du Bois will remain our main book reviewer. We consider her reviews to be extremely fair, and we can vouch for the meticulous care and hard work she puts into them.
In spite of M. Pinay’s (present French Premier) much heralded “Defense or the Franc” program our printing prices continue to rise slightly, yet we are keeping the price of the magazine the same. We shall do our best not to augment it, but to do that more subscriptions would be more than welcome.
It is with great sorrow that we heard of Mr. Eugene Jolas’ death. Mr. Jolas will long be remembered as the editor of the best pre-war little magazine to be published either in Europe or America namely, transition where the best writers of two continental first appeared.  It has always been the secret ambition of all little magazines to emulate transition and attain some of its success and fame. We wish to express our deep sympathy to Mr. Jolas’ family for their great loss.
The next number of POINTS will appear some time in early autumn. The “staff” is taking a summer holiday and an exact date cannot yet be fixed for No. 15.
Again we remind readers that we more than want letters on their opinions, bad or good of the magazine. As one reader wrote us, one is apt to feel that one is publishing in a vacuum without a goodly number of them.
SINDBAD VAIL
Kenneth L. Beaudoin’s Dauphin Island Fantasy reached us just as this number of POINTS was going to press. While in general we don’t print long poems, room had to be made for this one, so we squeezed out a couple of items in order to be able to fit the Fantasy in.
“What I have tried to do in it”, Beaudoin writes, “is make a poem which starts right at your lips, you might say, and then takes a long symbolic journey inside of you; and then you come out, you who are the reader and I who am the writer changed, and walk around… not quite conscious like someone remembering his childhood…
Dauphin Island Fantasy is the best poem by a young poet that I have yet seen. Beaudoin is in full control of his language, knows what he wants to say. and says it right. The poem is, to my mind, one of the three or four really valid works of art that POINTS has printed. Such work as this justifies the existence of a little
magazine. I think POINTS can be proud of itself, and our readers will, I think, be grateful to us, for publishing this very important poem by a very important young poet.
D. JON GROSSMAN 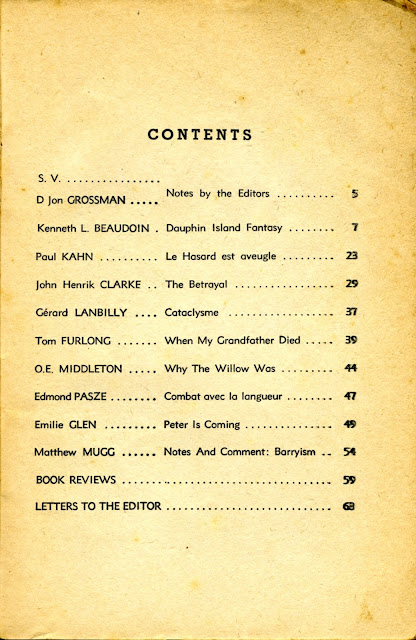 and the line drawing of Place de la Concorde, both images © The Paris Review, All Rights Reserved. 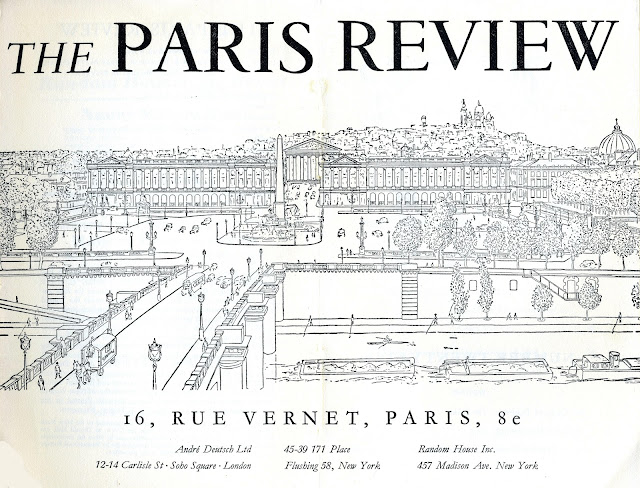 THE MAN WHO WENT AWAY. by Themistocles HOETIS, Pellegrini & Cudahy, 1952.
In “The Man Who Went Away“. Themistocles Hoetis presents the sometimes poignant story of a young woman. Akin Arahk bereft of her lover.
Akin is an oboe player who casually becomes acquainted with Alex, a confused and self-centered student.  It is the break–up of their subsequent affair which constitutes the main thread of this story.
The first and last two paragraphs of the book are the same, the chain of events in the intervening pages are revealed in Akin’s melancholy thoughts as she dreamily executes on her oboe a concerto she has composed for Alex.
After having led her to believe that they would someday soon leave together for Europe—“This country is not for us—we don’t belong here. Let‘s leave it.  Let‘s go far away”—Alex departs wordlessly and alone for Bordeaux. There follows an exchange of letters (to my way of thinking the best part of the book). Akin‘s, wistful, searching, and finally exasperated. Alex’s are little more than travelogues containing certain guiltless and unsatisfactory explanations of his behaviour and dubious promises of sending for her when he will have found himself (a lovely excuse).
Akin arrives at the painful knowledge that Alex does not at all love her when he disclaims all responsibility towards the child she is going to bear him. Akin writes a disgusted final letter to Alex, and, full of resolve, visits several friends in town who may help her to find work.   Among the people she sees are Peter Giorgios, Alex’s sloppy and affectionate cousin, arid through him meets a remarkably sinister art patron named Ludwig von Riefenbach, and finally fleeing from his debilitating influence, stays the night with a taxi cab driver friend of hers. At the conclusion of this useless time in town, all resolve fled from her, Akin is alone.
The story, very slight in itself, is told with a minimum of descriptive detail, which tends to give the book and all of the characters therein, especially the central figure of the girl, a queer blankness,  It is really only in her appeals to Alex in her letters that Akin comes to life. As for that guilty protagonist Alex, he is well drawn as a consistently egoistic and irresponsible youth, typical enough of the times, but one feels little sympathy for him.
The girl‘s visit chez von Riefenbach is probably as out-of-this-worid as the author meant it to be, and here, in order to do it full justice, Hoetis temporarily abandons the willy-nilly emptiness and goes into a fine bit of detail and von Riefenbach together with his very personal house emerge with clarity.
However, with the episode involving the taxi driver, the story collapses a little. Akin, who in spite of everything seemed rather pure, is suddenly a commonplace creature. Moreover the taxi driver himself is not convincing and this passage seems particularly pointless.
A redeeming bit follows immediately upon Akin’s return, from the city when, hope momentarily revived, she falls upon a letter she thinks is from Alex. It is not, and here on these last pages, Akin’s aloneness and despair are touching.
Themistocles Hoetis is trying fro tell on old story in a new way, one cannot blame him for that. but the style he has developed is necessarily arty and the flashback system he employs is more confusing that it ought to be.
THE POOR IN SPIRIT, by Otto FRIEDRICH. Little Brown & C.,1952,
This is a love story, in no way usual, of a weeks‘ duration.  It takes place in the Berlin of 1947, “The Poor in Spirit“ is an excellent name for it, for the two principals (there is scarcely anyone else in the book beyond the almost dismissed other loves of each, and the living ghost of a repellent old woman) are spiritless victims of happenstance.
He—Paul Stein, thirty eight years old, American, is a press attache for the U.S. occupational forces. She—Magdelena Rilke. is a necessarily unknown quantity, a German girl alternately passive and fierce.
From their first meeting at the opera they drift through a series of un-gay walks and meals together while he—more than she—struggles for some sort of definitive rapport.  It is never achieved, although they do become lovers. Stein is disheartened by her impassioned account of the one man she really did love, a dead Nazi pilot who was so bent on aimless destruction he was shot down by his own people.   Magdalena in her turn is unmoved by Stein’s rather less interesting former love story which, however, provides telling insight into his childish nature. For Stein does not know what he wants. He is dissatisfied with himself, but his analytical powers directed cruelly against himself are useless, he has no remedy.
For a week Stein is painfully smitten with the enigmatic Magdalena and is at the end of it, as suddenly, un-smitten. The end of their relationship is coincidental with an awkward meeting with the girl’s ragbag grandmother, and with his subsequent leaving of Berlin.
Otto Friedrich, for all that he is extremely young, writes very well. This is his first published novel, bur he has written three others. He is an analogist, and allows himself to be helped along by Stein who also has a tendency to analogize.  But neither of them ever descend to the level of mere long-windedness, and Stein does not lose his identity at any time.
Magdalena is a baffling personality, and does not come off as well as Stein. Nor is she meant to, she puzzles Stein as she does the reader. For the rest, the heavy, sick, and lawless atmosphere of a ruined city is well represented. One feels the joylessness of living in such a city, for the conquerors almost as much as for the conquered.
Jane PENE du BOIS.