POINTS 13 was published in the spring of 1952, the reference to months covered by the publication now discarded in favor of a seasonal designation that would continue throughout the remaining life of the publication.  The “Notes on New Contributors” page was also gone as were pages displaying ads for other journals. 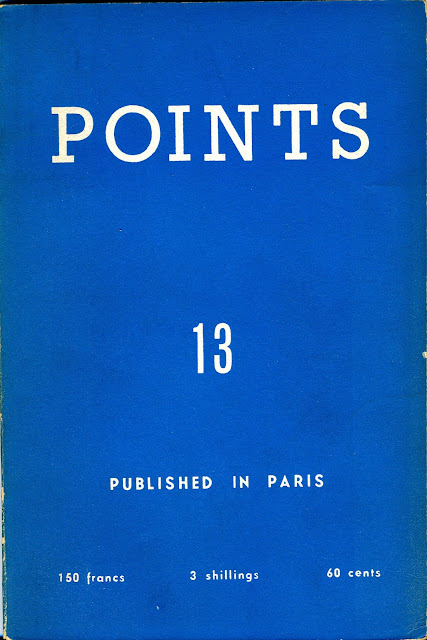 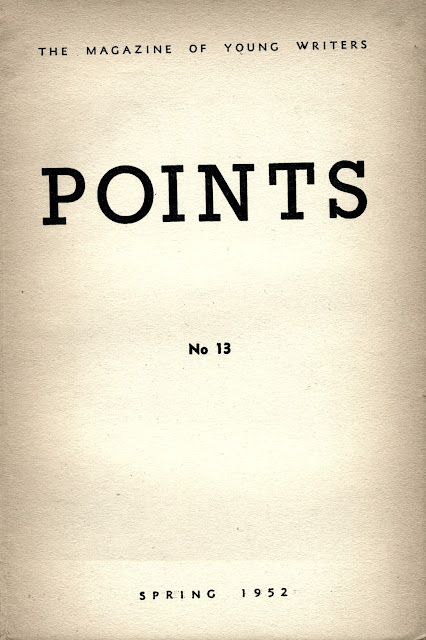 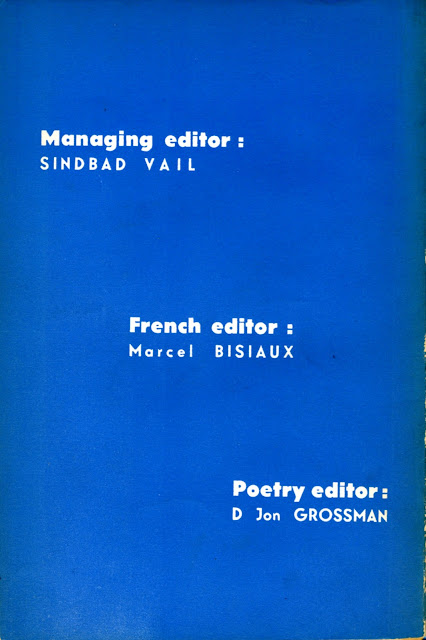 NOTES BY THE EDITOR

No. 13 of POINTS is smallerthan its predecessor. The last issue was of course a double number. As promised the price of this copy is the same as usuaLEverything has gone up; printing, paper, wages, but not POINTS.
As usual we have kept to formula. We have in this issue young writers from the U.S.A., Ireland, England, New Zealand and France. We wish we could have manuscripts from many other countries. Yet, I think that considering the limited popular appeal of this magazine that the contributions coming, though not overwhelming in number are satisfactory, and eminently satisfactory in variety. We get letters from all parts, from India, Australia, Montana, and Missouri (which must be considered as different countries) Greece, North Africa and Germany. Considering our lack of proper distributing facilities it’s not so bad.
There is only one article and one “letter” in this issue. The second and concluding article by D. Jon Grossman on some French writers.  It is hoped that we can publish more articles in the summer issue. We also have less short stories than heretofore, but then we only wished to print what we considered the best. Domhnall O’ConaiII’sshort story “Asylum for the Blind” was first accepted by ENVOY, the Irish magazine, a couple of years ago. However the printers in Dublin refused to print it. We are lucky that their bigotry is our fortune. Again and again I must repeat, young writers from all over are cordially invited to submit manuscripts. This is one of the few magazines for young writers existing. Repeat, we can’t get enough work, especially short stories.
The book review section of this POINTS is varied too.  If certain books have already been out a few months, we must remind our readers that we are quarterly, and that it sometimes takes quite a while to receive foreign books. Also most publishers are quite commercial and narrow, and they think that its a waste of money to put us on their review list. Only “New Directions” sends us free books regularly to review. We must either buy the others or borrow them. We have approached many publishers on this subject, and we consider ourselves fortunate when we receive only letters of encouragement from these publishers.
The next number of this magazine will be out in mid-summer. Let us remind readers again that we welcome letters of praise or criticism and that those of most general interest will be published.
Sindbad Vail
CONTENTS
Sindbad VAIL – Notes bu the Editor
Mervyn JONES – The End of A Belief
Gérard-Simon PASQUIER – La Mort de François Verdier
Elliot STEIN – I do. Siro
Domhnall O’CONAILL – Asylum for the Blind
François GARNUNG – Babels
Clive D. GREIDINGER – Poem: Degas Saw Dancers
Fritz HUCHTING – Poems: Jigsaw J. A. Prufrock – Burden – Goobye
P. W. BOWLES – Two Poems
Claude BAL – Poem: La Complainte de Petit Marchand
Louis LE GUELLAULT – Poem: Fin du Jeu
James Mc CORMICK – Chicago Letter
D. Jon GROSSMAN – A Few Thousand Battered Books: Part II
Michael JOHNSON – Book Review: The Castle of Argol
Michael JOHNSON – Book Review: Squirrel Hotel
Sindbad VAIL – Book Review: The Troubled Air
Sindbad VAIL – Book Review: No Time Yo Be Young
Letters to the Editor
Information on the contributors available on the internet yielded a fairly long obituary for Mervyn Jones and a short summation of publications by Elliot Stein.  A search for Domhnall O’Conaill found references to other writings, but little information concerning the life of this Irish author. Domhnall O’Conaill’s short story is presented in scanned jpeg form, © The Estate of Domhnall O’Conaill. 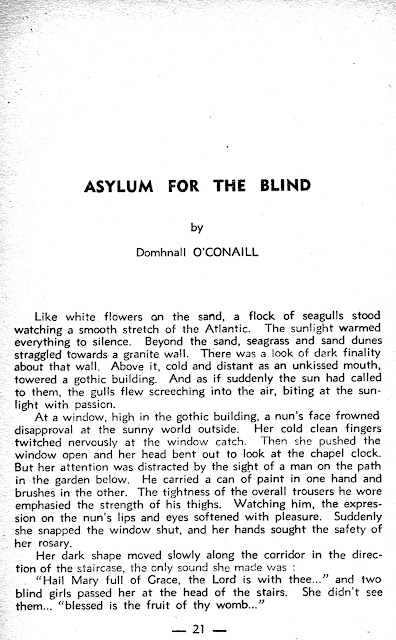 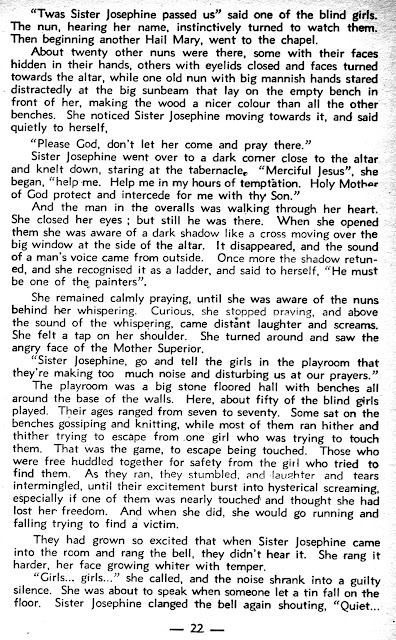 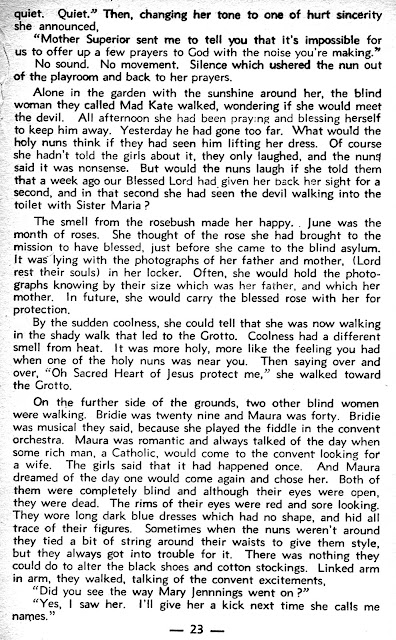 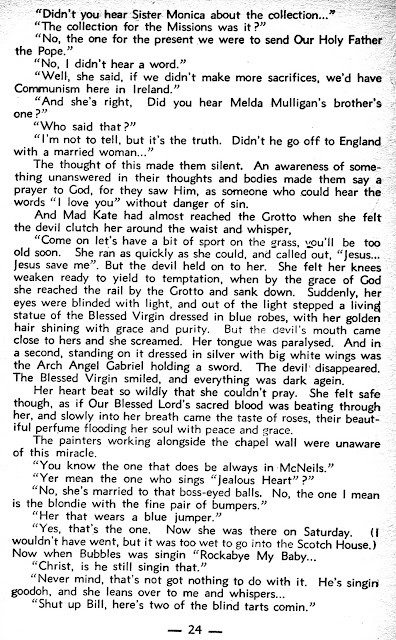 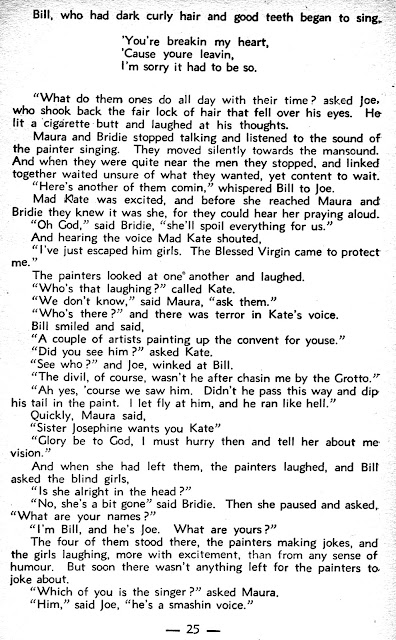 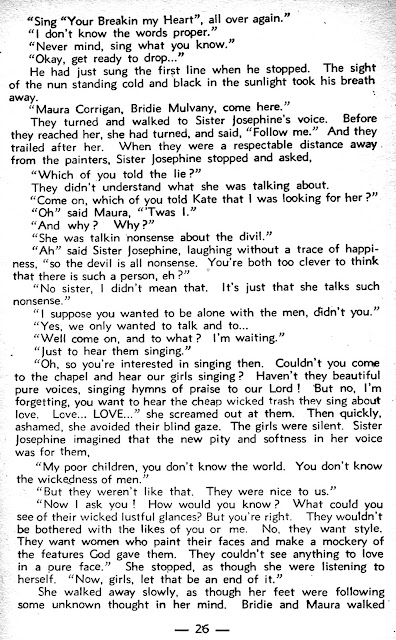 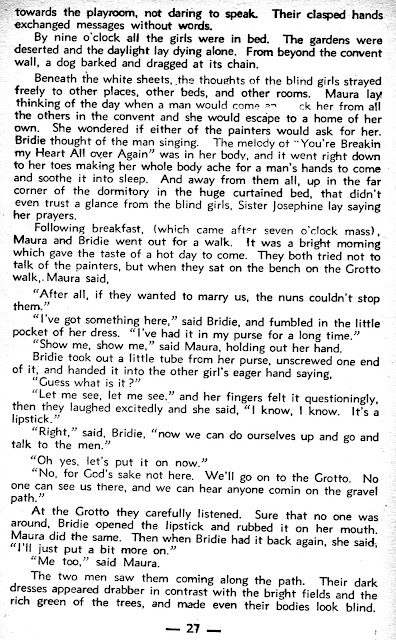 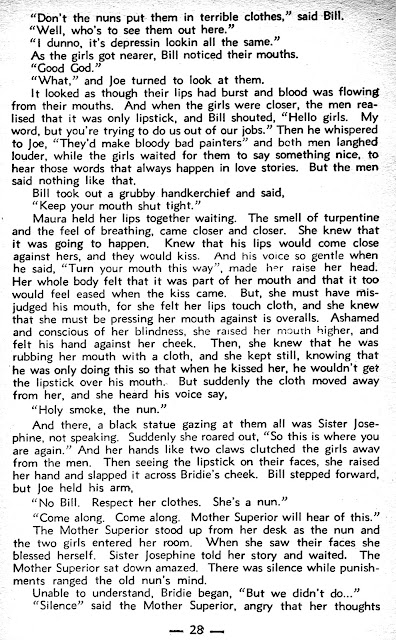 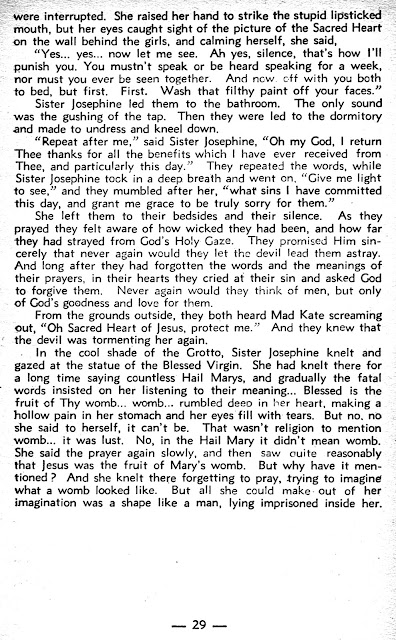 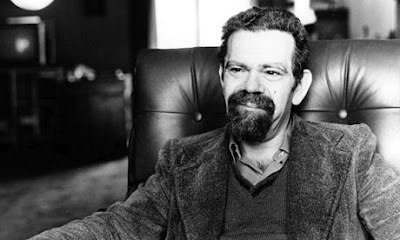 Perhaps the most poignant aspect of the career of Mervyn Jones, who has died aged 87, was that he became far better known as a fine journalist, and the biographer of Michael Foot, than the talented novelist he always craved to be. From an early age, he yearned to write the great novel, possibly the epic poem. He looked upon WH Auden as his distant jewel, and in 1939, when he and his mother moved to New York, Mervyn attended Auden’s lectures on poetry with a conscious ambition to follow in the great man’s footprints.
Alas, the two crafts of journalism and novel-writing often seemed at war within Mervyn. His closest friends and admirers recognised this only too well. We grew to know that a bad-tempered Mervyn in journalist mode signalled that a new novel was in the works. As a chronicler of his times, Mervyn was hard to match. He was a brilliant descriptive reporter on almost any subject, from the condition of the Sami society in northern Finland (the Lapps of Lapland), Paris around the time of the events of 1968 and the problems of the South Wales coal industry. He reported across the spectrum, working for the New Statesman and Tribune (his only staff jobs as a journalist), and as a freelancer for the Guardian.

Offers of full-time jobs came with regular frequency from a range of papers including the Daily Express and the Observer, but he resisted the temptation in case it trapped him and damaged the search for that holy grail, the great novel.
After writing his first novel, No Time to Be Young, in 1952, he joined Tribune and, from 1956 to 1960, wrote mostly about contemporary politics. He was brought into the fold by Foot, its then editor, and also served under Dick Clements. He continued to write for Tribune as a freelance drama critic until 1967. By then he was on the staff of the New Statesman, where he remained for 12 years under a range of editors from Paul Johnson and Richard Crossman to Anthony Howard. He travelled widely in Europe, the Middle East, India and the US, producing a string of brilliant pieces of reportage. Each time he returned, he immediately negotiated a breathing space to write another novel.
Probably his finest and most widely read work was Holding On (1971). It portrayed the loves and hates in a working-class family, told through the eyes of a London docker. A Survivor (1968) was, as he later admitted, “quite consciously a look at myself”. That was his eighth novel, but he was unhappy with it. Five years earlier, Mervyn had written his magnum opus, a 200,000-word epic called River. It described the rise and fall of three successive civilisations, supposedly existing in the remote past but injected with reflections on the ills of contemporary society. His publisher and friend Tom Maschler was appalled by the manuscript and refused to publish it.
John and Mary (1966) was a typical period piece in which a young man and young girl go to bed and spend the next day wondering whether to stay together. The film rights were snapped up and, at that point, Mervyn believed he had landed on “planet success”, especially when he was handed a cheque for £5,000 for the film rights. But he soon became disillusioned by the Hollywood machine, its rewrites and recasts, and was embarrassed by the final version, made in 1969, with a screenplay by John Mortimer and starring Dustin Hoffman and Mia Farrow.
Mervyn wrote 29 novels, five unpublished, some of which should have earned him a place among the literary names of the day. His narrative was always sensitively tuned to the grandeur and absurdity of the human condition – not surprising, perhaps, as he was the son of a leading psychoanalysist.
His father was Ernest Jones, intimate colleague and biographer of Sigmund Freud and the man who had brought the great psychoanalyst and his family out of Nazi-controlled Vienna in 1938. In his autobiography, Mervyn writes movingly about his childhood, his deep regard and attachment to his Welsh father, his dislike of his Viennese-born Jewish mother Katerina, and the various traumas of his schooldays, including being psychoanalysed as part of the family business. He describes the affection he felt as a teenager for Freud, a warmth reciprocated by the great man, and the importance of that influence on the entire Jones family.

Mervyn was born in an elegant Nash villa on the fringe of Regent’s Park, London. He had a comfortable upbringing – his family owned homes in Sussex, the Gower peninsula, in Wales, and a villa at Menton, on the French Riviera. Mervyn often confessed that “my real mother was Nanny” – an uneducated, working-class woman who cushioned him from what he perceived as a strange and lonely world. It was made even lonelier when his elder sister, Gwenith, died, when he was six. He was marked for life.
Mervyn was educated at Abbotsholme, in Derbyshire, the fashionable, middle-class, progressive boarding school for boys. He hated it, but it was there that he became a committed socialist. He joined the Young Communist League aged 16 – at the very time his father was rescuing Freud from the Nazis.
A voracious reader, Mervyn had begun to absorb the classics from the Left Book Club as well as a broad band of literature. He left Abbotsholme a convinced Marxist, persuaded, notably, by the writing of John Strachey. His father wanted him to go on to Oxford and he was offered a place at Queen’s College, but turned it down. This led to a severe conflict with his father, who had set his mind on Mervyn’s Oxford education and was wounded by his son’s activities in the Communist party. Mervyn and his mother were packed off to the US in August 1939, where Mervyn hastily enrolled at New York University.
He decided to concentrate on poetry and attended Auden’s lectures. But conscience told him he should be back in Britain fighting fascism. He and his mother finally returned in 1942. He became a full member of the Communist party and took a job as a garage hand in central London.
He joined the forces in November 1942, and ended up in an anti-tank artillery regiment as a second lieutenant training for the D-day landings. He arrived two days after the initial landings, and by October was in the Netherlands, where he was taken prisoner. The collapse of the Third Reich found Mervyn in a prisoner of war camp in the Rhineland that was liberated by the Americans. He returned briefly to Britain and was then packed off to India to serve another two years before his demobilisation in 1947.
His first job offer came from the Daily Worker, via his friend Claud Cockburn, the paper’s star columnist. But Mervyn declined – again resistant to being tied to a regular job. He was without one when, in 1948, he met and married Jeanne Urquhart, also a communist and nearly five years older. It was a treasured partnership. He was on the brink of his first novel and writing freelance articles. Both of them were active in the Communist party until 1951, when Mervyn finally broke away.
He joined the Labour party, quickly associated himself with the Bevanites, and stood unsuccessfully as a Labour candidate in the 1955 general election in Chichester, West Sussex – a Tory stronghold. That was where he first met Foot, whose biography he was to write in the fine account published in 1994.
Mervyn’s final years were spent, virtually blind, in a home in Brighton where he was cared for by his three children and close friends. The diminutive, elf-like build became more diminished but the intellectual wit remained in pocket-sized, battle cruiser quality. Jeanne died in 1990. He is survived by a son and two daughters.
Mervyn Jones, writer, novelist and journalist, born 27 February 1922; died 23 February 2010