Several employees at ABC including producers, writers, and technical staff were jazz fans and had been petitioning the station’s executive in charge of programming, Selig J. Seligman, to develop and present a show devoted to jazz.  He finally relented and in the spring of 1956 gave Pete Robinson and Jimmie Baker, the producers who would shepherd the show, a green light to proceed.  He told them there was no budget for the show but they could have dead studio time and a bare bones staff, no frills.  They would have to stick to musician scale, write their own material, scrap together their stage sets, and they could produce four shows.

The four show limit was dependent on their finding a sponsor to underwrite future shows.  They were successful and the show ran for two and a half years including a move to the national broadcast schedule in 1958.

Art Pepper appeared on STARS OF JAZZ twice, first on January 28, 1957 when the guest vocalist was Jo Ann Greer.  His second appearance was a year later on March 31, 1958  with another female vocalist, Pam Russell.  Both programs were licensed to the Armed Forces Radio and Television Service for distribution to troops via transcription disks.  The January 28, 1957 show was edited and presented on AF-9313 as Show #20 and the March 31, 1958 show was similarly edited and presented on AF-6992 as Show #70. AFRTS disks could not contain any promotion or advertising content so the sponsor ads and breaks had to be edited out of the taped program.  This reduced the length of each show to around twenty-five minutes from the original half hour broadcast length.

Recordings of the audio from the STARS OF JAZZ programs have appeared over the years, initially on LP records and later on compact disc when that technology replaced the LP.  One of the most prominent releases was on the Calliope label in the mid 1970s.  These LPs used the original professionally recorded audio tapes as the source for their releases and the quality is relatively high.  Other releases used amateur recordings that had been taped from the television broadcasts.  One of these sources was from the collection of a jazz enthusiast by the name of Bob Andrews.

Andrews moved to Los Angeles from Wisconsin in the late 1940s.  He became a jazz fan while in his teens and began to build his jazz collection of mainly 78 RPM records while still in high school.  Andrews was also an amateur drummer and would attend jam sessions around Los Angeles where he could sit in and participate.  He opened his first jazz record shop in the early 1950s in the south bay area of Los Angeles, fairly close to The Lighthouse Cafe that had a growing reputation for a straight ahead jazz policy.  Andrews’ shop, RECORD VILLE, also carried phonographs and the newest audio sensation, portable tape recorders.

Andrews bought one of the top Pentron models for his own use and would take it to clubs all over Los Angeles where the owner would allow him to tape the jazz entertainment.  Over a period of years Andrews amassed a tape library that captured the evolution of jazz as it was played in clubs ranging from The Lighthouse in Hermosa Beach to the Tradewinds in Inglewood and the Surf Club in Hollywood.  Andrews also established a record label, VANTAGE RECORDS, and released the first commercial recordings of Hampton Hawes and Pinky Winters among others.

Bob Andrews wired a connection between his Pentron tape recorder and his television set so that he could tape television broadcasts that featured jazz content.  Among the television shows that he taped on a regular basis were The Steve Allen Tonight Show, The Ed Sullivan Show and the Stars of Jazz. Andrews licensed many of his recordings to a Japanese record producer in the 1980s and the Vantage label was reborn, first as a series of LPs and later as a line of CDs when that technology became the dominant vehicle for recorded music.

Calliope 3015, released in 1976, contained four selections from the March 31, 1958 show with Pam Russell.  The back of the record jacket listed the date incorrectly, perhaps the source of wrong dates that have been repeated on subsequent releases.

One of the first CD releases was on the French ZETA/ADES label from 1990.  WEST COAST JAZZ, ZET 729 contained other selections from STARS OF JAZZ programs in addition to the four selections from the Art Pepper March 31, 1958 program, again listing the date incorrectly as being from 1957.

Many of the Bob Andrews Collection Vantage LP releases were reissued as compact discs on the NORMA label in Japan and NORMA NOCD5612 (1995), WEST COAST SAX MODE, presented two tracks from the Art Pepper March 31, 1958 program, ALL THE THINGS YOU ARE and EVERYTHING HAPPENS TO ME.  The date was listed correctly.

The seven tracks that appeared on the Vantage LP were licensed to another Japanese label, JAZZBANK, and the CD reissue from 2003 was on M1056 as ART PEPPER – SHOW TIME – music from very famous TV show programs.

The EU label, Lone Hill Jazz, released the same seven tracks on LHJ10204 (2005) entitled ART PEPPER QUARTETCOMPLETE TV STUDIO RECORDINGS.  The dates for both shows were incorrect and they listed the January 28, 1957 selections as coming from The Steve Allen Show.  Additionally they failed to list Frankie Capp among the sidemen on these sessions.  The CD contained other material in addition to the STARS OF JAZZ selections.

The AMJ JAZZ COLLECTION is manufactured by Absorb Music Japan, Inc., and distributed by King Records Co., Ltd.  In 2008 they reissued the seven tracks that had been previously issued by JAZZBANK using the same cover photograph of Art Pepper by Ray Avery and the same title, ART PEPPER – SHOW TIME – music from very famous TV show programs on ABCJ 515.

The latest CD recycling of these Art Pepper STARS OF JAZZ tracks (and probably not the last) was issued by the Sinatra Society of Japan in 2012 on SSJ XQAM-1620.  The first four tracks from the March 31, 1958 program are listed incorrectly as coming from March 11, 1957 (there was a Stars of Jazz program on that date but it featured Warne Marsh and Ann Richards).  The next three tracks from the January 28, 1957 program list the date correctly but mistakenly list Chuck Flores instead of Frankie Capp as the drummer. The eighth track is a previously unissued bonus track, the slow blues that Art Pepper performs at the close of the program while the credits are rolling on the TV screen.

The ninth track, THESE FOOLISH THINGS is listed as being recorded at Antone’s, Long Beach, CA on February 18, 1957.  It is also listed as unreleased.  This is in error.  It is from The Lighthouse, recorded by Bob Andrews (January 6, 1952), and released on Norma NOCD 5630. Also reissued on Absorb ABCJ-514.

Production scripts from the original shows with dates: 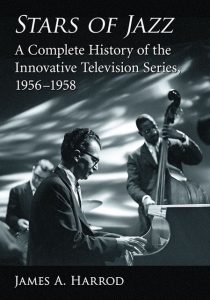 My history of Stars of Jazz has just been published by McFarland Publishers and is available directly from McFarland. It should be in stock at the usual online sources, Amazon, Barnes & Noble, etc. It will take several weeks for the ebook version to be available from the same sources.