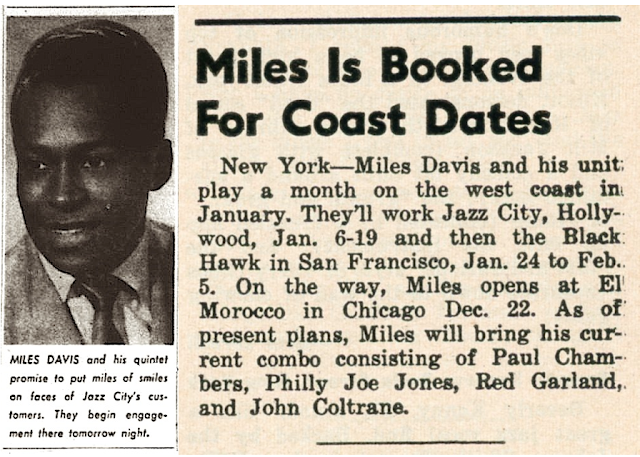 The December 28, 1955, issue of Down Beat magazine ran a short column announcing a series of West Coast bookings for Miles Davis’s current combo with Paul Chambers, Philly Joe Jones, Red Garland, and John Coltrane. The new quintet had a recent release on the Prestige label, MILES, that featured the new quintet. 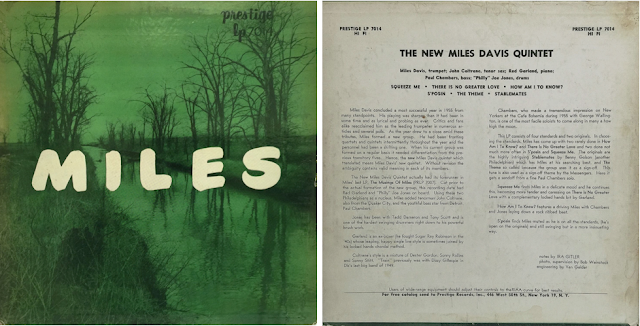 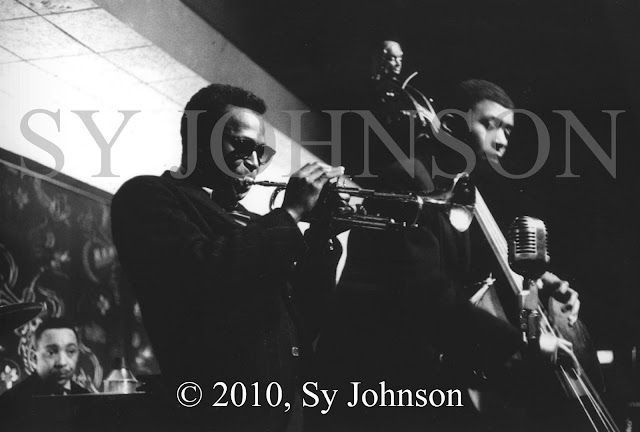 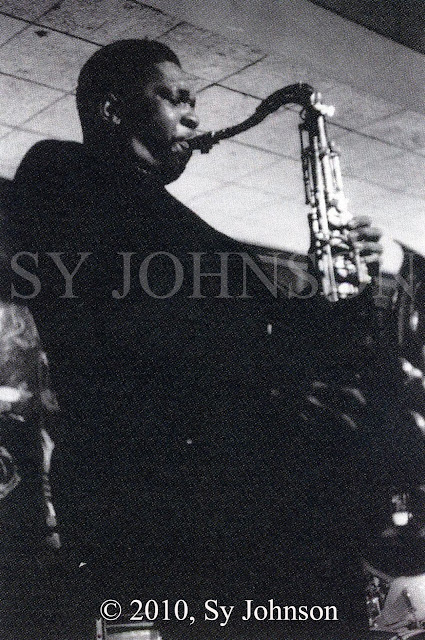 Miles Davis placed Paul Chambers next to him on the front line during their first engagement at Jazz City. The Miles Davis Quintet drew standing room only crowds at Jazz City. It is highly likely that Kenny Drew was in the audience during this first engagement and impressed with what he heard, approached Paul Chambers to ask him to play on the first session for Jane Fielding’s second Jazz:West album. 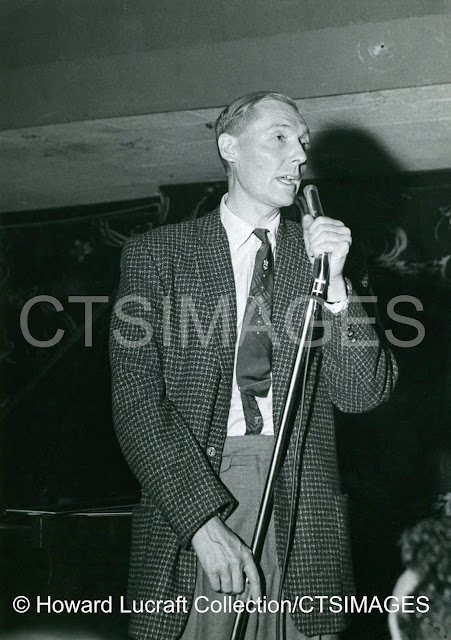 Howard Lucraft’s Jazz International was a regular Tuesday feature at Jazz City. The January 10th program included the Barney Kessel Quartet and a combo from Los Angeles City College. The combo might have been the group that recorded for Jazz:West later that spring with Cy Colley and Julius Wechter. Dave Pell was the guest speaker that evening.

The Wild Bill Davis Trio opened on Friday, January 20, 1956, and their two week run ended on February 2, 1956. Their album on Epic Records was currently available in the record stores. 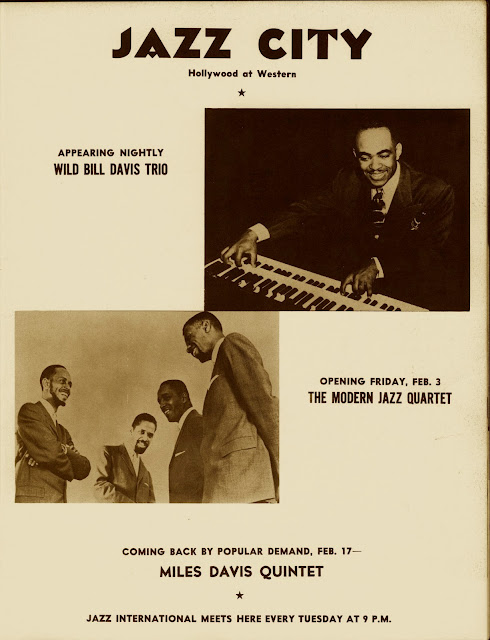 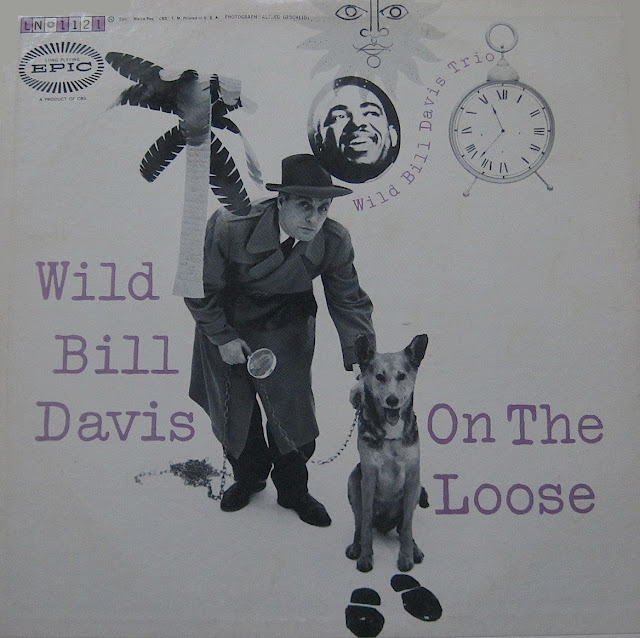 The Jazz International program on January 24th featured a quartet led by Jimmy Giuffre plus a Marine Corps Trio with Stan Kenton as guest speaker.

The MJQ had recently signed with Atlantic Records after fulfilling their Prestige Records contract.

The Miles Davis Quintet returned to Jazz City on February 17, 1956, for another two week engagement. The quintet must have been given some special consideration regarding Saturday night, February 18, 1956, as they appeared at the Pasadena Civic Auditorium as part of Gene Norman’s Modern Sounds Festival that also featured The Cal Tjader Quintet, the Modern Jazz Quartet, Shorty Rogers and His Giants, and the Lighthouse All Stars. 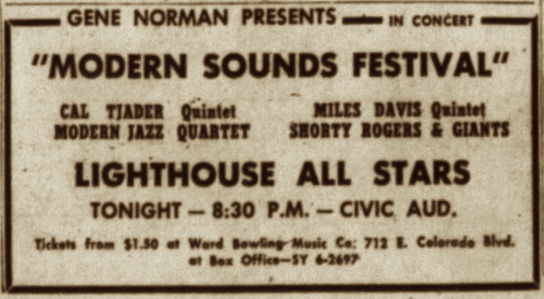 Gene Norman recorded the concert. The Miles Davis Quintet set was released on CD in 2005 as part of a special edition of Miles Davis’s ‘Round About Midnight album for Columbia, C2K 94750.

S. Duncan Reid quotes Luis Miranda in Cal Tjader: The Life and Recordings of the Man Who Revolutionized Latin Jazz (McFarland, 2013).
“The stage had no curtain. So the audience could see the workers in the back setting up the instruments of the next group before they were announced. All the other [performers] went on ahead of us…. Every musician got a nice applause when they were announced…. Then [the master of ceremonies] said, ‘Now, ladies and gentlemen, The Cal Tjader Quintet!’ Everybody stood up and screamed. We got a standing ovation. Cal was shocked and said, ‘Oh, my God!’ …When we were backstage, Miles Davis said, ‘What the fuck! Oh shit!’ That pissed him off. He couldn’t believe it. Most of the people that came to this concert were there to see Cal Tjader. That place was packed with his fans…. Miles was thinking that what we were doing was not important compared with the jazz he played. [The standing ovation] was something that everyone was talking about.”
Down Beat usually covered major nightclub appearances in their “Caught in the Act” column. The absence of any coverage in Down Beat or Metronome covering the Miles Davis Quintet appearances at Jazz City in 1956 suggests a deliberate boycott of Miles. Unfortunate, and unprofessional! 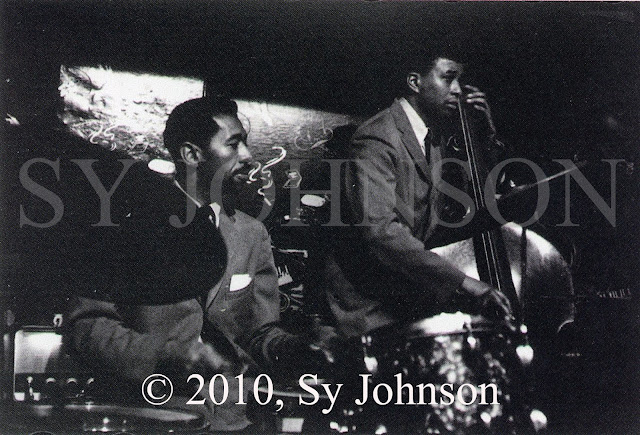 
When the Miles Davis Quintet returned to Jazz City for their second engagement Miles placed Paul Chambers in the rear next to Philly Joe Jones. One could speculate that Miles was displeased with Paul Chambers’s playing on the Jazz:West Kenny Drew Quintet that backed Jane Fielding on her second album, and even more displeased when Paul Chambers accepted Herb Kimmel’s invitation to lead his own session for a Jazz:West album.
The quintet completed their second two week engagement on March 1, 1956. The next day, Friday, March 2, 1956, three members of the quintet [Paul Chambers, John Coltrane, and Philly Joe Jones] gathered at Western Recorders for Paul Chambers’s session for Herb Kimmel’s Jazz:West label, Chambers’ Music: A Jazz Delegation from the East.


Sy Johnson attended this gig; and recalled it in Jazz Magazine (Johnson, 1976, p. 21):
I had known Miles slightly in Los Angeles when he came out to the Coast for the first time with Coltrane, Philly Joe, Paul Chambers, and Red Garland. I caught every night of a two-week engagement the band played at Jazz City, and I shot pictures by available light with my Leica whenever I could get close to the bandstand. That in itself was unheard of in the fifties, and when I made some prints, Philly Joe undertook to sell them to the customers.
When the band returned from two weeks in San Francisco, Miles sat down at my table one night and began to talk [but] I was tongue-tied by the solemnity of the occasion.

From then on, he would motion me into the kitchen of Jazz City with a nod, usually on the first intermission, when the club was crowded with people who wanted to talk with him. He’d stand with his back to the kitchen door, talking about his Mercedes, other players, women, and pointedly ignoring musicians and fans who wanted to say hello. They would wait patiently or try to say something over his shoulder, and finally drift away. I remember Benny Carter in line once, and murderous glances at me from some of the younger black players.
The circumstances of the Jazz:West recording session are noted via an email to Lewis Porter, February 18, 2004, from French saxophonist Martin Jacobsen who related:
I visited Kenny Drew in Copenhagen about twelve years ago, and he told me a funny story about this recording [the Paul Chambers Quartet session on March 2, 1956]. Actually, they were on a tour with the Miles Davis Quintet, when Miles left the band in Los Angeles, took all of the money from their gigs and went back to New York alone. To get over there themselves they did a quartet recording of among others “John Paul Jones” and also “Eastbound” (which they in fact were!) to make some money for the flight tickets. I don’t know whether this story is true or not, but Kenny laughed and said they got the money for the recording session so that they could go back to New York and “beat up Miles Davis”!

The Jazz:West recording session for Paul Chambers is covered in my recent history of the label. The session was most likely set up during the first engagement at Jazz City when Chambers participated in the first recording session for Jane Fielding’s second album for Jazz:West (on January 21 after the quintet closed at Jazz City and before they headed north for the engagement at the Black Hawk). When Miles Davis brushed off Herb Kimmel’s invitation to play [uncredited] on Chambers’s Jazz:West date, this might have been a factor in Miles Davis’s decision to split for New York?

Miles Davis and his new quintet made several appearances in St. Louis where they played Peacock Alley. The following CD release has also been placed in 1957, not 1956. 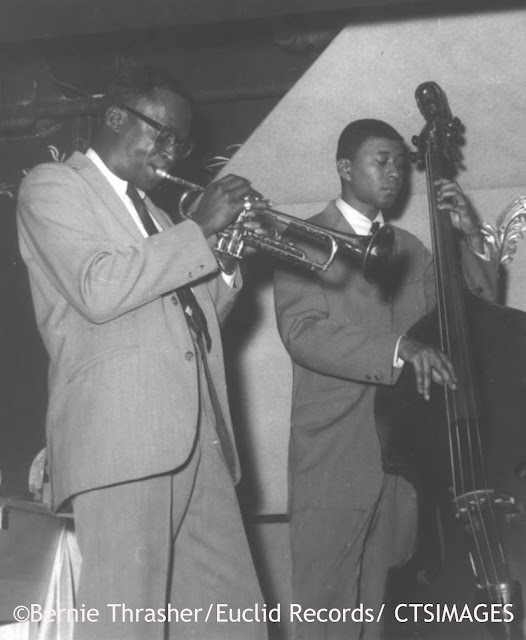 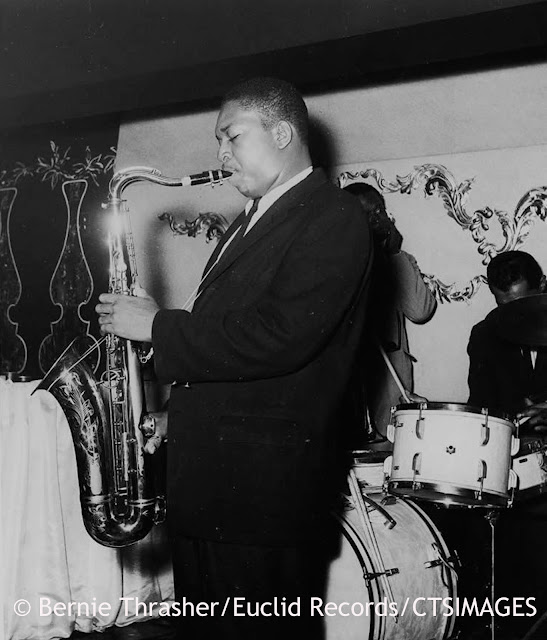 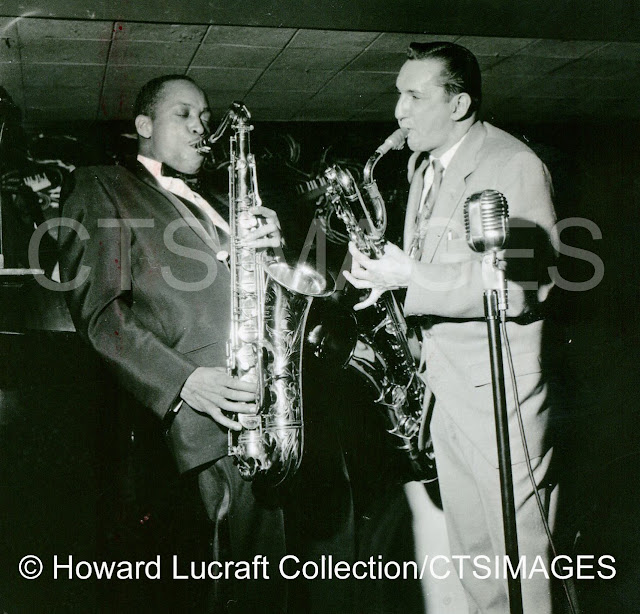 Sonny Stitt and Serge Chaloff opened at Jazz City on March 2, 1956. They were backed by the house rhythm section, Sonny Clark on piano, Leroy Vinnegar on bass, and Lawrence Marable on drums. 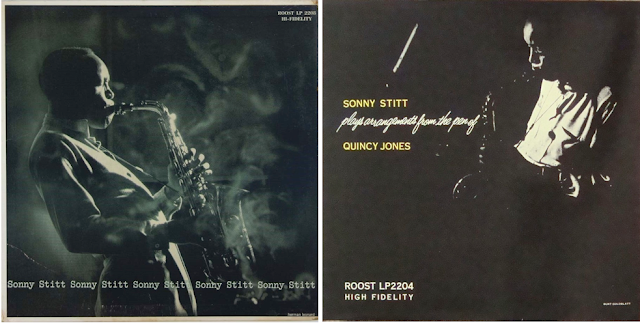 Howard Lucraft’s Jazz International on Tuesday nights always featured additional jazz groups along with the star combo on the marqee at the club entrance. 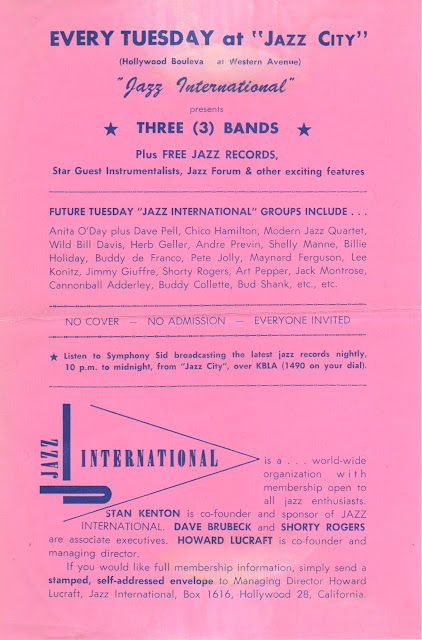 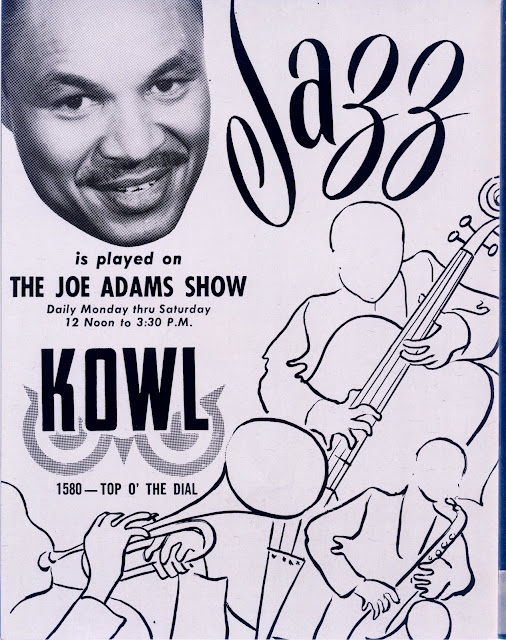 The following Tuesday Shelly Manne and His Men, a Westlake College Group, and George Laine were the featured attractions for Jazz International. 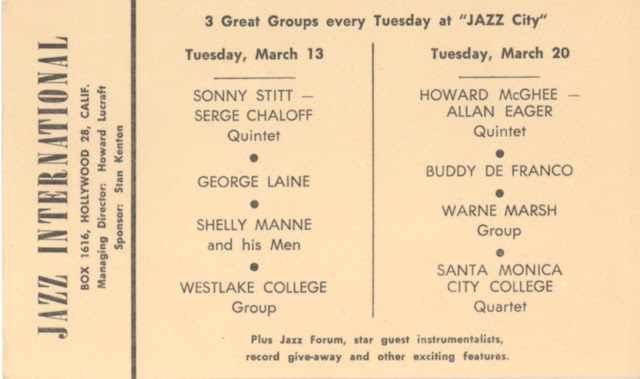 Howard McGhee and Allen Eager opened at Jazz City on Monday, March 19, 1956, and their three week engagement ended on April 5th when Anita O’Day and the Dave Pell Octet opened the next day. Allen Eager had an LP on Savoy that featured him with various bebop combos from 1947. He was also featured on an album with Gerry Mulligan from 1951. Eager played Birdland in 1953 with Howard McGhee. 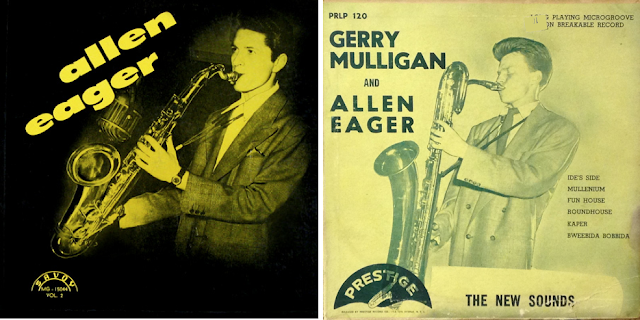 Howard McGhee recorded a second album for Bethlehem Records in February of 1956 that joined his first album for the label, The Return of Howard McGhee.

Anita O’Day appeared at Jazz City in the fall of 1955 when she shared the billing with the Buddy DeFranco Quartet. Dave Pell’s Octet was new to the Jazz City stage although he hosted Jazz International forums on a number of occasions. Dave’s Octet proved to be a popular attraction and they returned to the club in the future. O’Day and Pell opened at Jazz City on April 6th for a two week engagement that ended on April 19th.

Shorty Rogers brought the Dave Pell Octet to the Atlantic label when he was hired as A&R for Atlantic. In between his two albums for Atlantic Dave Pell recorded an album for Capitol. 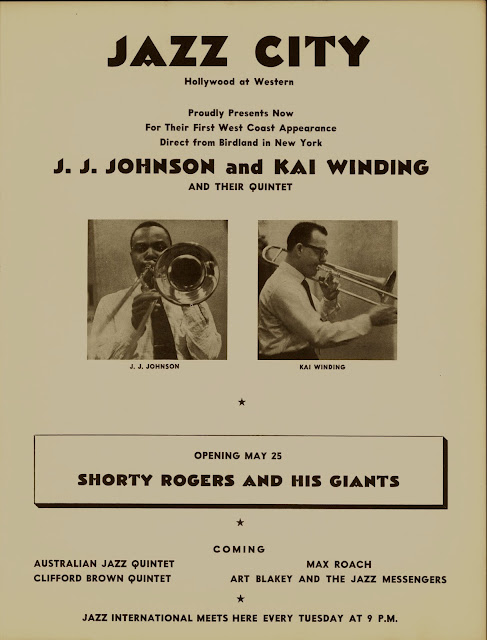 The Kai Winding and J. J. Johnson Quintet played a three week engagement at Jazz City, opening on April 20 and closing on May 10, 1956. They had two recent LPs on the Columbia label.

Art Tatum opened at Jazz City on April 11 for a two week run. 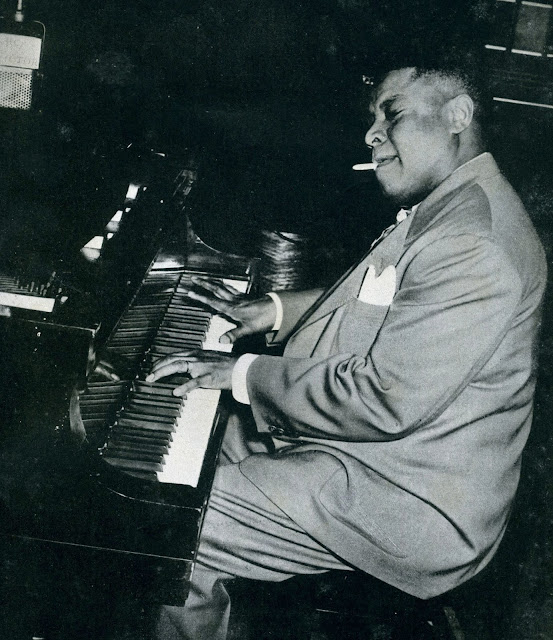 Art Tatum was one of the jazz artists recording for Norman Granz’s Clef label and had recently completed an album with Roy Eldridge, Alvin Stoller, and John Simmons.

Shorty Rogers and His Giants opened at Jazz City on Monday, May 21st, a few days ahead of the date stated in Irving Granz’s “Jazz a la Carte” ad that noted the 25th.
Shorty’s Giants at this time included Jimmy Giuffre, Lou Levy, Ralph Peña, and Larry Bunker. 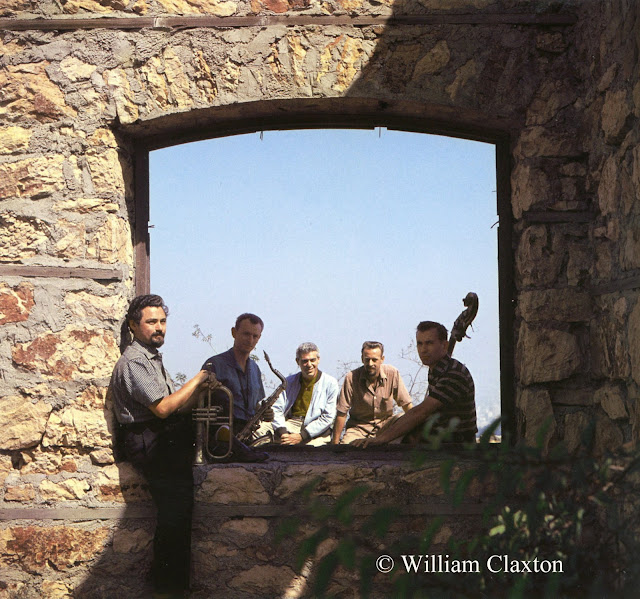 Shorty had recorded two albums for Atlantic that were in the record stores and in July he would record a new album for RCA Victor with his new edition of the Giants. 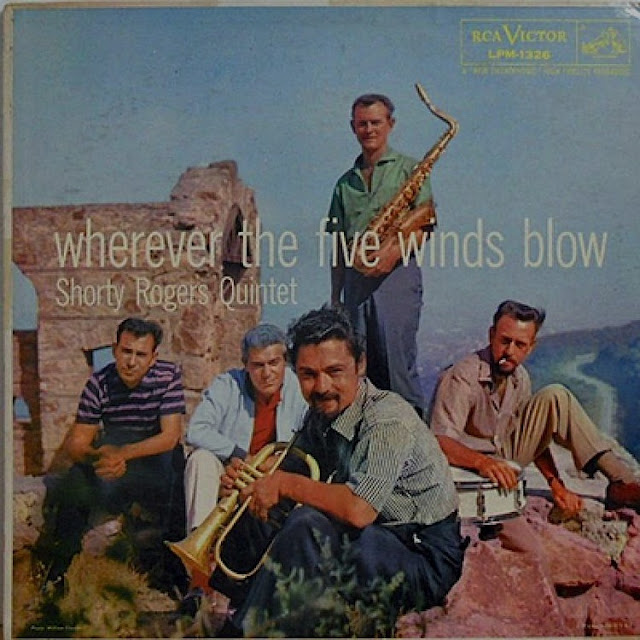 Buddy DeFranco appeared at Jazz City in the summer of 1955. He was booked at the club again that fall and returned to Jazz City in December as the year wound down. DeFranco’s fourth booking at Jazz City in June of 1956 attested to his popularity with the patrons who frequented the club.
The Buddy DeFranco Quartet alternated sets with the Bud Shank Quartet for three weeks in June. Bud Shank’s Quartet included Claude Williamson on piano, Don Prell on bass, and Chuck Flores on drums. Bud had two albums featuring his quartet on Pacific Jazz.

The DeFranco/Shank double bill closed at Jazz City on June 21, 1956. The Australian Jazz Quartet/Quintet opened June 22nd and filled out the rest of the month at the club. The group recorded for the Bethlehem label.

The Howard Lucraft photos that greatly enhance this presentation have been provided courtesy of CTSIMAGES.  The author would like to extend a most heartfelt thanks to Cynthia Sesso, Licensing Administrator of the Howard Lucraft Collection.  Please note that these photos remain the property of the Howard Lucraft Collection and are used here with permission.  Any inquiries regarding their use, commercial or otherwise, should be directed to:  Cynthia Sesso at CTSIMAGES.
The Jazz International handbill and postcard have been provided courtesy of Ken Poston, Director of the Los Angeles Jazz Institute.