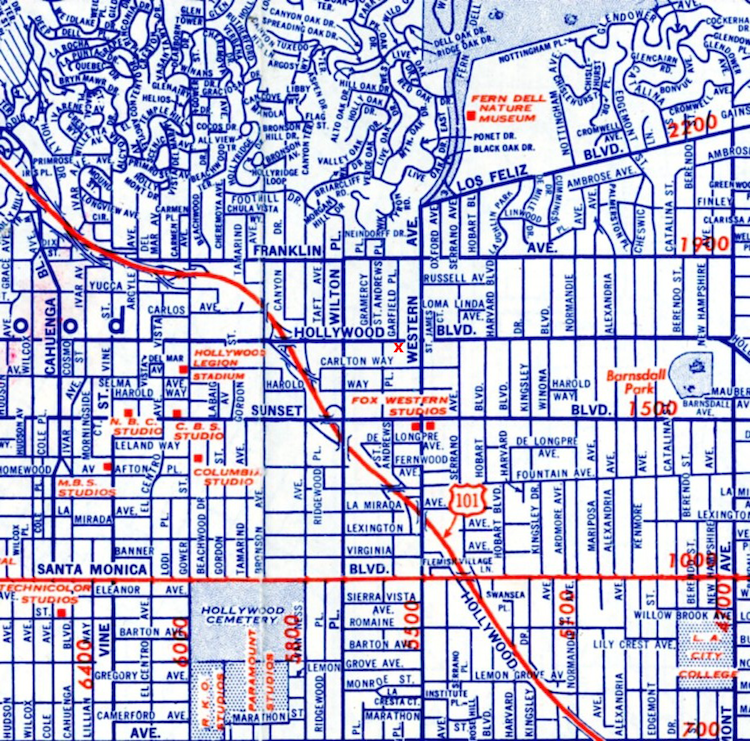 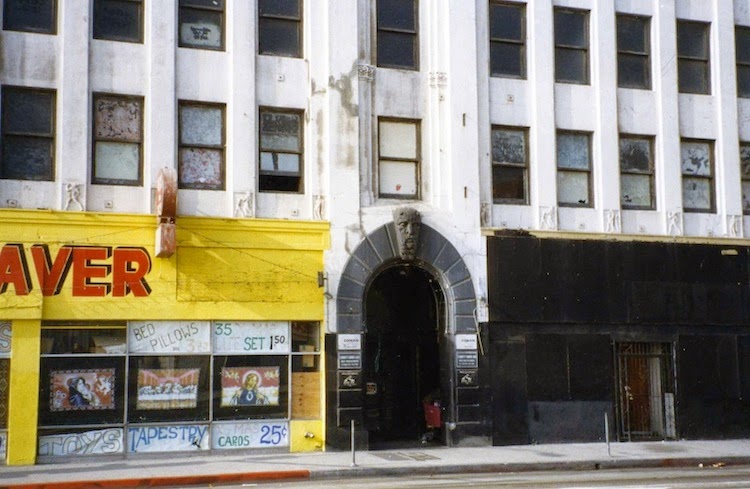 The photo above from 1994 shows the space to the right of the main building entrance that was at the time unoccupied and vacant. Maynard Sloate recalled in an interview that there had always been an establishment at 5510 Hollywood Boulevard with a license to serve liquor. 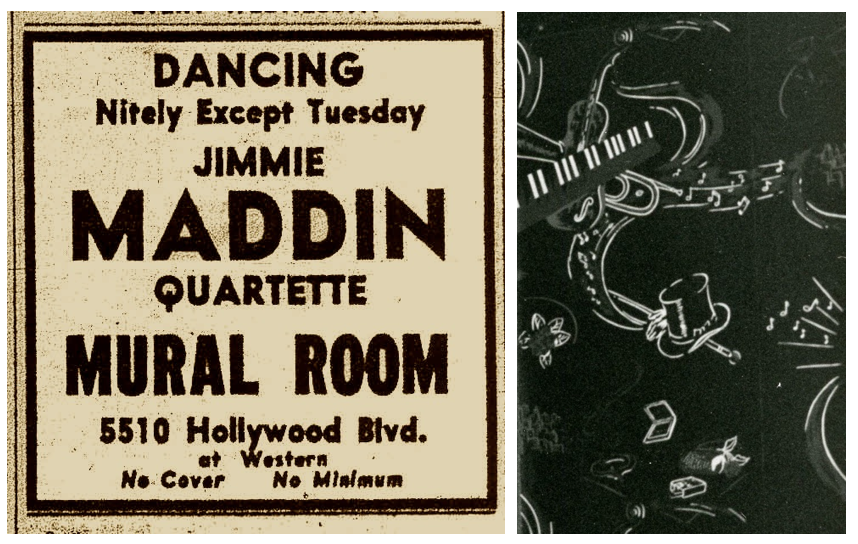 In the early 1950s it was called The Mural Room and regularly featured music entertainment with bar service and a dance floor. The “mural” referred to decorative motif on the walls that wrapped around the room that featured musical instruments, top hat, cane, gloves, and other accouterments associated with the good life.

Maynard Sloate aspired to be a jazz drummer in his youth and earned a reputation as a good time keeper who could provide a kick to small combos and big bands alike. In fall and winter of 1946 he regularly presented a jam session at the SUSIE Q that attracted all of the top jazz musicians who happened to be in town. Depending on the musicians who showed up to jam, the music could be traditional, be-bop, or progressive; Maynard could keep the music moving regardless. In the 1950s the space at 6700 Hollywood Boulevard would become a bastion of traditional jazz known as The Royal Room. 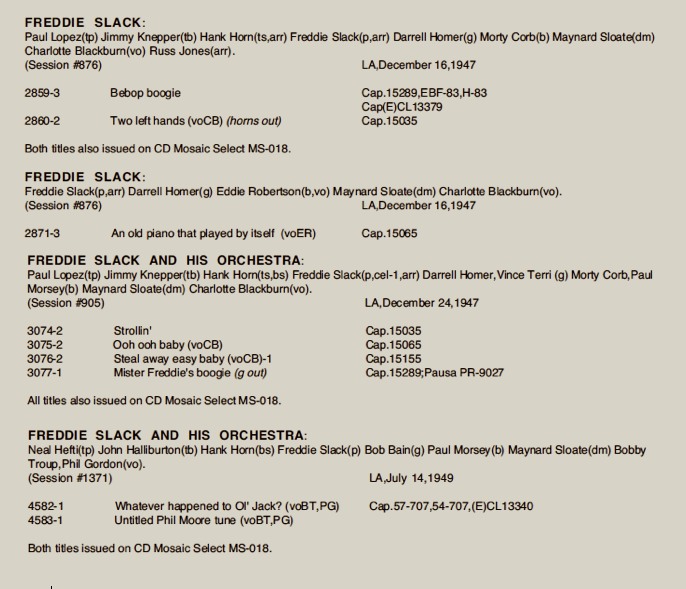 Maynard Sloate recorded with Freddie Slack for Capitol in the late 1940s as noted in the discography above. He soon realized that although he was paying the bills and enjoying a good living as a jazz drummer, he would not get ahead as quickly as he hoped and began to explore the possibility of running his own club.
The noun “city” had been used with modifying attributes over the years to define an entity that personified the ultimate of that “______” city.  New York and San Francisco both had their “Bop City” clubs and in the spring of 1952 Roy Harte and Remo Belli opened “Drum City” in Hollywood as the headquarters for all things drumming. Maynard and his new partner, Joe Abrahams, opened “Mambo City” at 5510 Hollywood Boulevard in 1954 and at the same time opened a burlesque club, “Strip City” at the corner of Western Avenue and Pico Boulevard. 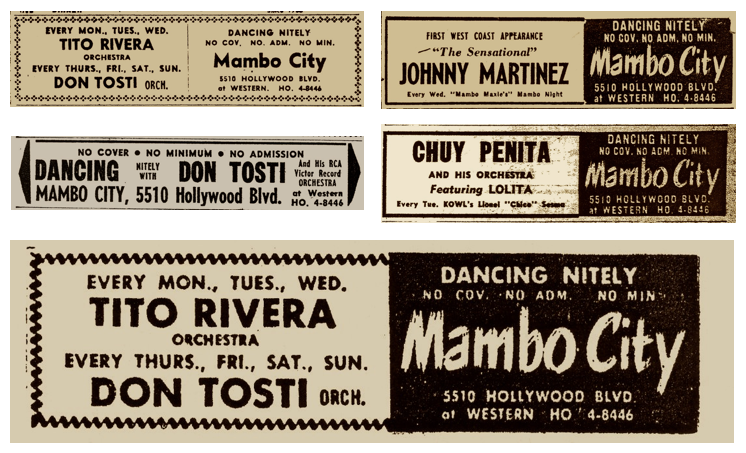 The partnership at Strip City included Bill Robinson. The three partners billed themselves as Maynard “Bumps” Sloate, Joe “Peanuts” Abrahams, and Bill “Zoot” Robinson on ads for the club. 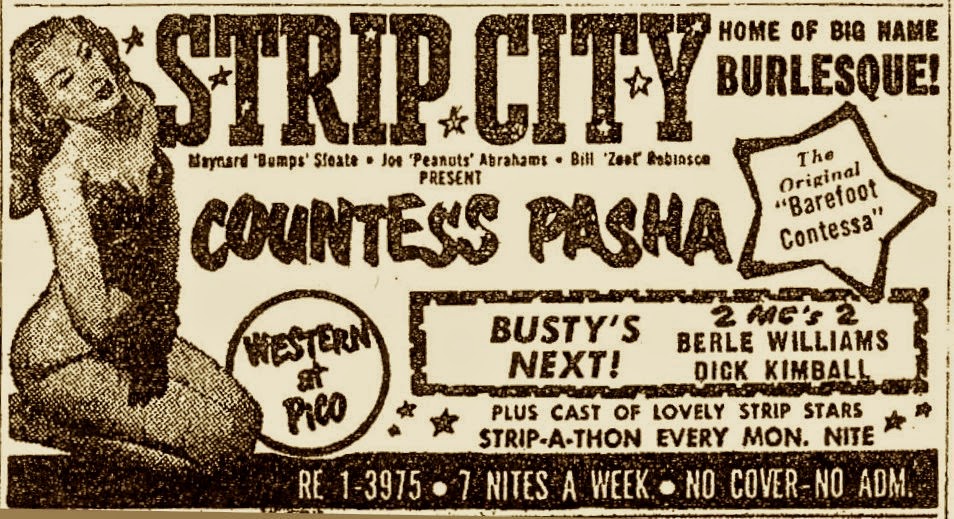 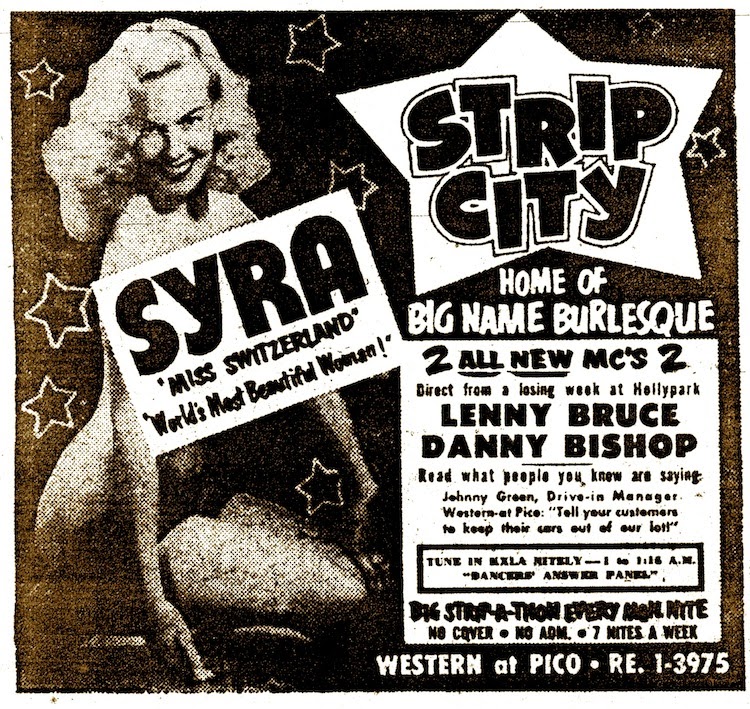 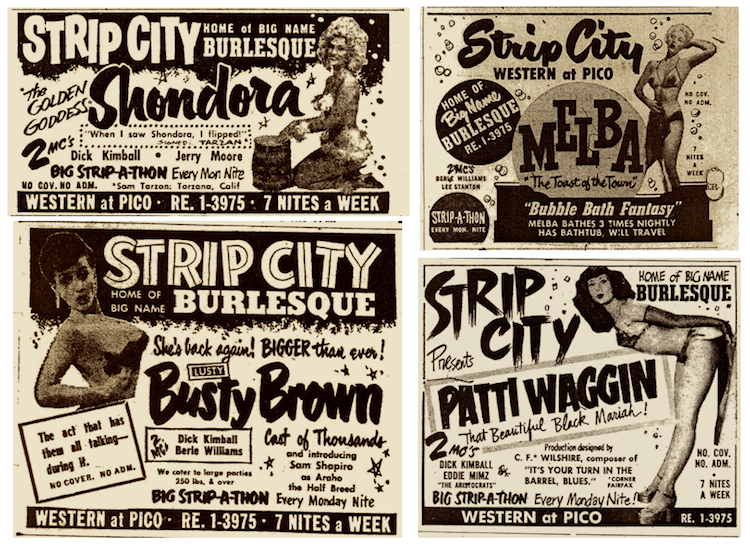 Mambo City was popular, having opened when the Mambo craze was sweeping across America, but Maynard and his partner soon discovered that the crowds they were attracting were more interested in dancing the night away, and did not run up a bar tab. Strip City was an instant hit and vied for customers with the other burlesque clubs that began to proliferate Los Angeles. But Maynard had an edge, his jazz background and knowledge of musicians working in Los Angeles allowed him to assemble the right combo to provide the right music to back the strippers.
In the fall of 1954 Maynard and his partner carpeted the dance floor, added more cocktail tables and chairs, and announced “JAZZ CITY.”