When Maynard Sloate and Joe Abrahams leased the space at 5510 Hollywood Boulevard and opened Mambo City they essentially kept everything the way it was when it was known as the Mural Room. The wall murals were left intact, the cocktail tables and dance floor were left intact, and the only change needed was the exterior sign.
For Jazz City they remodeled the front using glass blocks, added a large marquee where guest jazz artists could be announced, and a new neon sign proclaiming Jazz City. 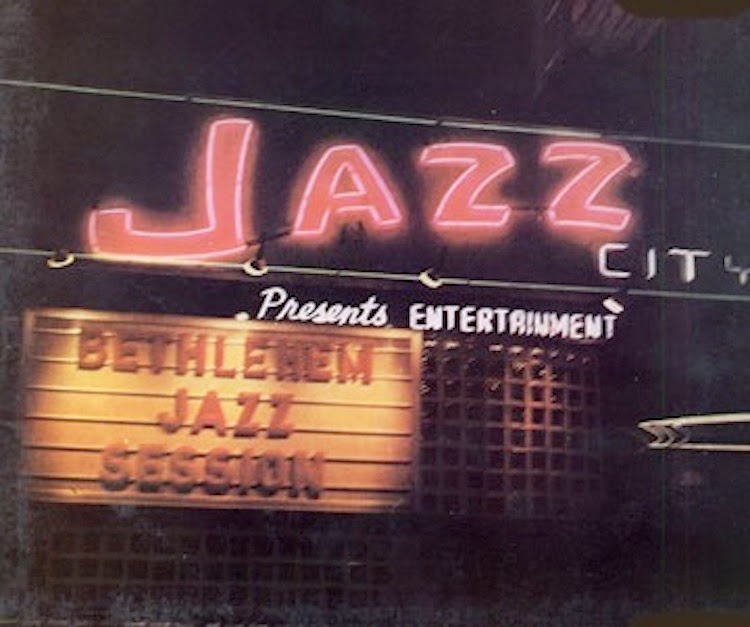 (photo by Dave Pell for Bethlehem Records)
A gala opening was announced in the newspapers on the evening of October 22, 1954. The featured jazz artist was Barney Kessel with Art Pepper on alto sax, Sonny Clark on piano, Leroy Vinegar on bass, and Lawrence Marable on drums. Vinegar and Marable would continue to be part of the house rhythm section during jam sessions as well as backing visiting jazz artists. The new club received a glowing review from Bill Brown in The Daily News. 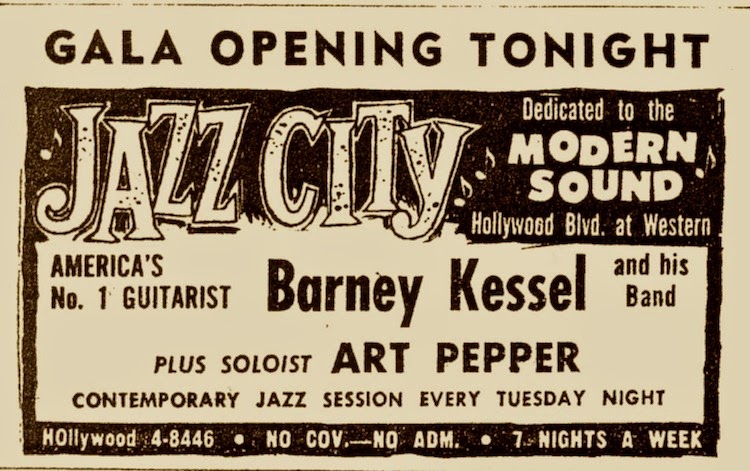 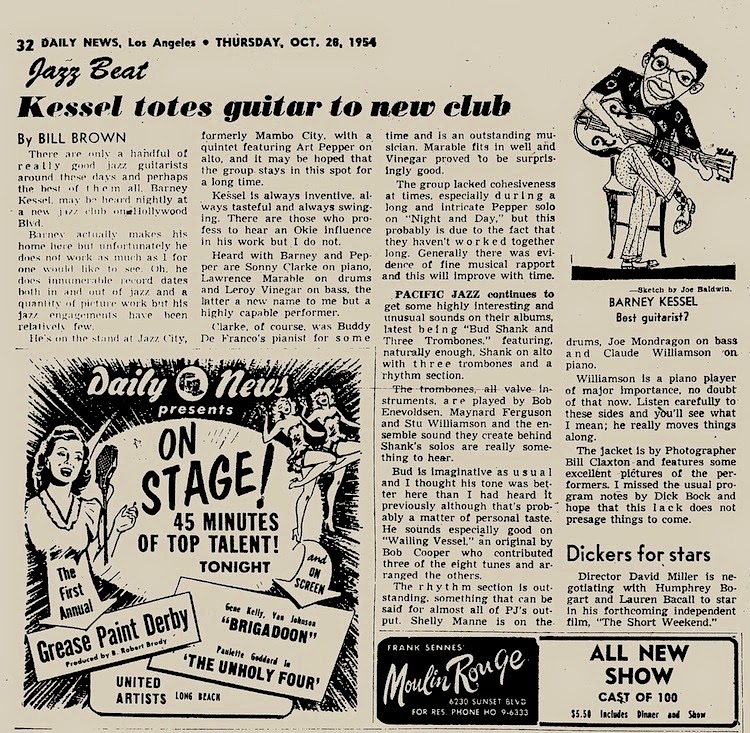 Art Pepper would remain with Kessel’s group at Jazz City until the 18th of November when Zoot Sims on tenor sax replaced Pepper. 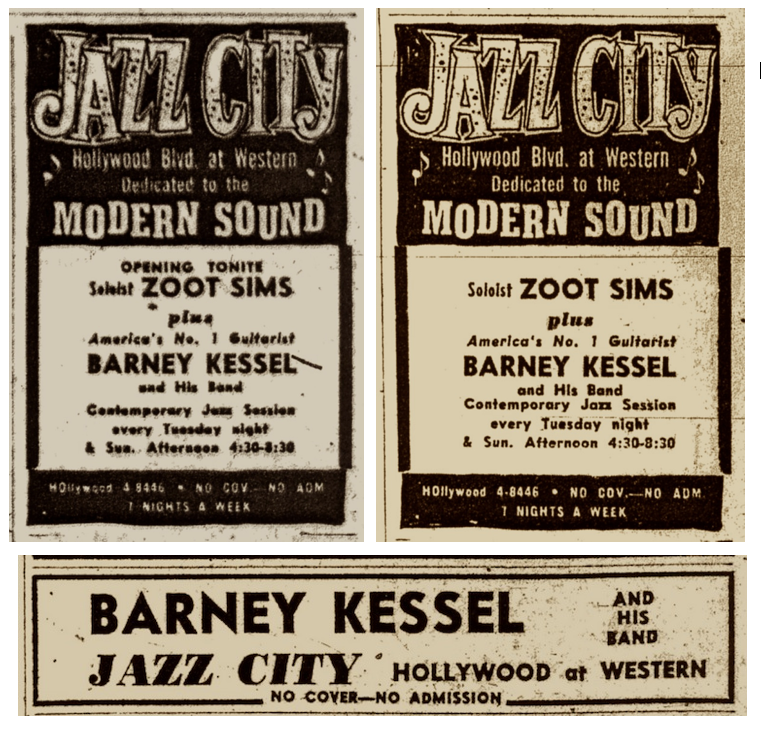 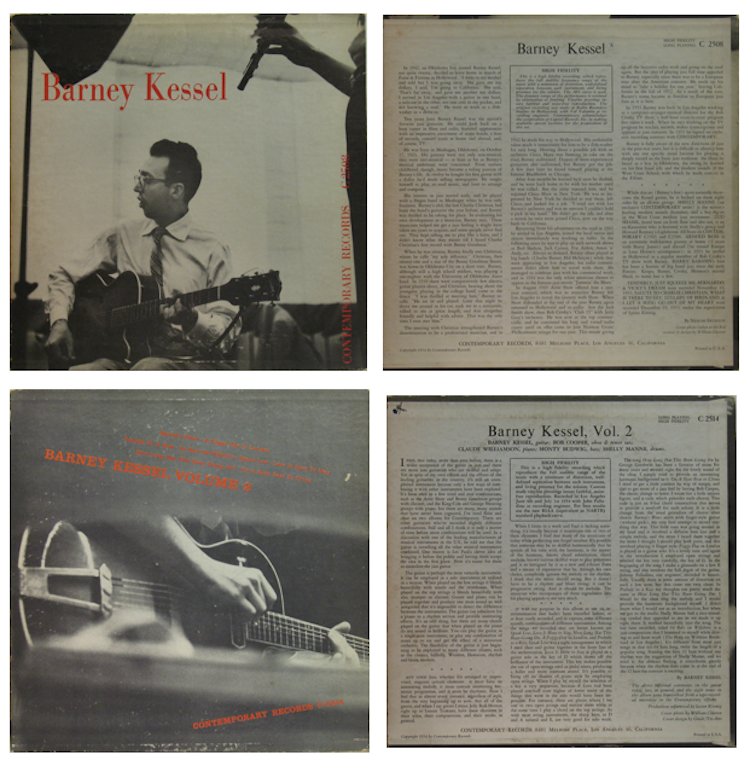 Barney Kessel had been an in demand guitarist on the jazz scene in Los Angeles for years, but finally emerged as a leader when Les Koenig signed him to his Contemporary label. Kessel had two ten inch LPs in release when Maynard Sloate tapped his old jam session friend as headliner at Jazz City.

Barney Kessel and Zoot Sims appeared on the AFRTS series, Bud’s Bandwagon, while they were appearing at Jazz City. The host, Bud Widom, asked each about their background in jazz and inquired about Charlie Christian and his influence on Barney’s playing and style. Their interview segment appeared on program #500 in the AFRTS transcription series. 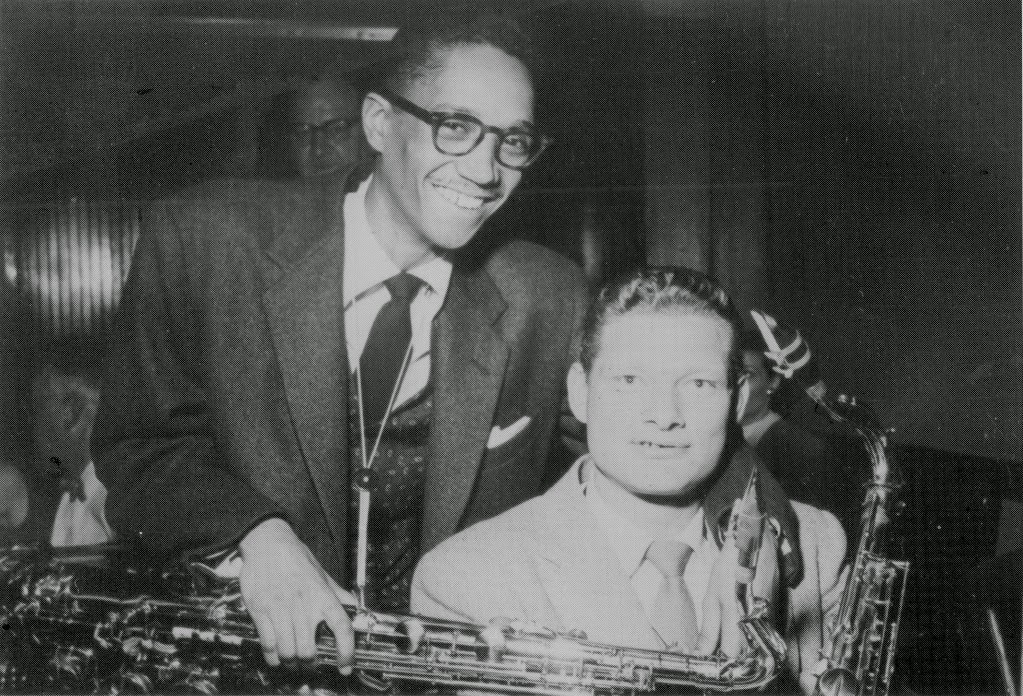 Wardell Gray would frequently drop by Jazz City for the jam sessions. In the photo above he is hanging out with Zoot Sims between sets.

John Tynan’s Hollywood column in Down Beat finally gave a nod to Jazz City in his year end look at what was happening on the jazz scene in Los Angeles:

HOLLYWOOD – December 29, 1954
GOODBYE 1954: Indications point to jumpin’est New Year’s Eve here in years. Auld Lang Syners will find everything from Dixie to “modern sounds,” and at all prices, though most hotspots are sticking to no-cover-no-minimum policy and figuring on volume for the pay-off . . . rounders looking for vintage jazz on the big night can savor several choice brands without getting far from Hollywood & Vine, with Kid Ory back in town at the Royal Room; Jerry Fuller (young clarinet man who has been with Pete Daily at Astor’s) heading his new combo at the Hangover Club, where he recently replaced Rosy McHargue; Red Nichols unit at Beverly Hills’ swank Sarnez Restaurant. Many hotspots now feature dancing as almost as important as drinking, even at Happy Koomer’s 400 Club, where pianist Willard McDaniel, essentially a soloist and song stylist, keeps most of his numbers on a rhythm beat for couples who want to get up and dance . . .
Celebrants who want to cover important modern jazz centers here on the big night will have farther to go but they will hear the best by covering Jazz City (Barney Kessel), the Tiffany Club (Lee Konitz), and still have time to get down to Hermosa Beach (45 minutes from Hollywood & Vine) for revelry with Howard Rumsey’s Lighthouse All-Stars (current lineup: Rumsey, bass; Conte Candoli, trumpet; Bud Shank, alto; Bob Cooper, tenor; Claude Williamson, piano; Stan Levey, drums).
DOTTED NOTES: Harry James drawing mere billing in current stand at Cocoanut Grove than any bandleader in recent years at this supper spot . . . And the Grove has countered Statler hotel’s imposing list of coming attractions by announcing early dates for Anna Maria Alberghetti, Lena Home, Tony Martin, and Freddy Martin . . , Record shop at Central & Vernon avenues faces “disturbing the peace” charge result of teen-agers ganging there for all-night r & b platter program presented by “Huggie Boy” (ugh!) Hugg . . . Horace Heidt, now doing local TV shows from his Trianon dancery here, grabs himself a sponsor and big-budget network spot on NBC-TV come Jan. 8.