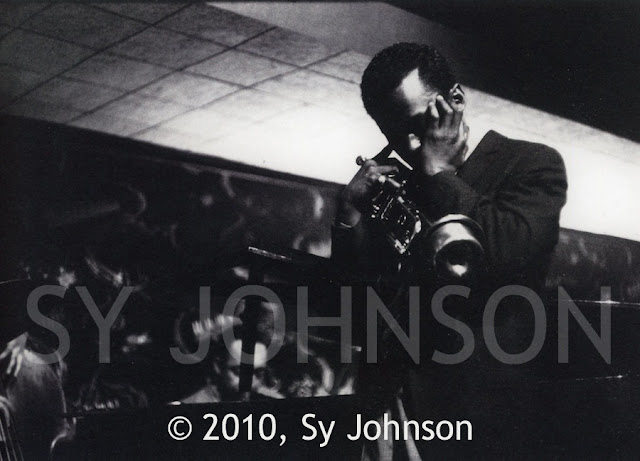 The Pete Jolly Trio shared the bill with the Miles Davis Quintet. Miles Davis was out of his contract with Prestige Records and he had reached a point in his career where he could dictate the terms of his employment. In this case he limited his performance to two sets per night with the Pete Jolly Trio filling the other slots.

Franck Bergerot’s description of Miles in this period appears on page 80 of WE WANT MILES, MILES DAVIS VS JAZZ, Skira Rizzoli, 2010.
“The Miles Davis Quintet became one of the leading bands on the contemporary scene, and the trumpeter took advantage of his success and the support of his lawyer, Harold Lovett, to become more and more demanding, reducing his appearances in nightclubs to three and then two sets a night, as opposed to the regulation five. In public, Davis’s behaviour was unpredictable, high-handed, even arrogant. He arrived at the last minute, refused to announce his numbers, turned his back to the audience and left the stage as soon as he stopped playing, sometimes after only a few notes. Between sets, he avoided the audience and discouraged any attempt to approach him. He thus broke with the social interaction of nightclubs, as if trying to divest jazz of its function as entertainment. He turned his shyness into aggressiveness and proceeded by intimidation, hiding behind dark glasses and the unsociable attitudes of a bad boy.”

The next double bill to appear at Jazz City for a single week engagement combined the Hampton Hawes Trio with the Lennie Niehaus Quintet. The Niehaus quintet featured Bill Perkins on tenor saxophone. This double bill opened on February 22nd and closed on February 28th.

One of the last photos of the Max Roach Quintet with Clifford Brown included Sonny Rollins as seen below. 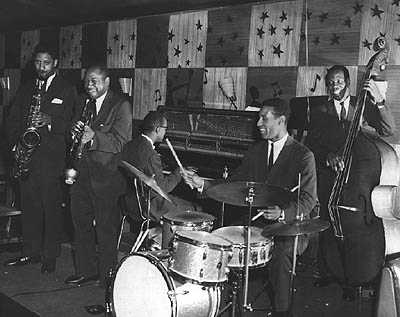 The next ad in the Mirror and daily News replaced Donald Byrd with Kenny Durham (a spelling error that was not corrected in subsequent ads).

The Max Roach Quintet closed at Jazz City the week of March 17th, exact day is not known, but Jazz City’s last night was March 21, 1957.

John Tynan’s Hollywood column in Down Beat noted the closing and the dire situation at jazz clubs in Hollywood. 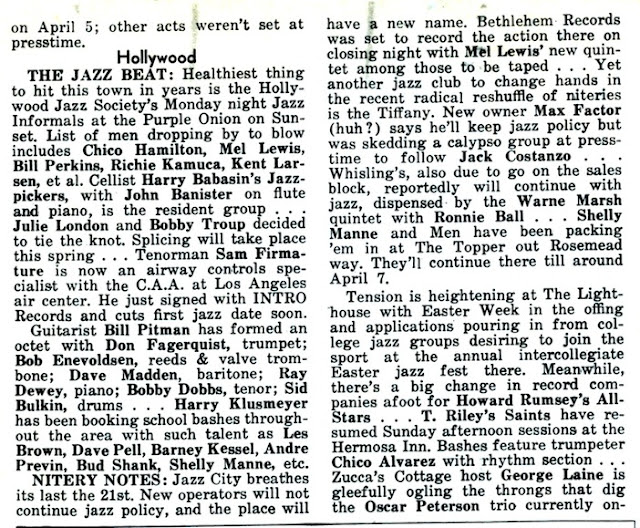 The jazz nightclub competition in Los Angeles had always been shaped by factors beyond the jazz talent that club owners were able to book. Location was a major factor. Was the location difficult to reach? Could patrons find parking? Was the club in a “safe” neighborhood? Would your car be broken into while you were in the club? Did you charge for admission? Did you have a drink minimum? Was the food good? Was the club comfortable and welcoming? Were the tables too close? Was the audience usually appreciative and listening, or loud and intent having a good time?
Booking jazz talent was also becoming problematic. Rising stars and their agents were beginning to dictate the terms of the engagement, number of sets they would perform, the length of the sets, and the fee for the artist to perform. Club owners and operators knew what their club could generate in food and drink sales based on filling the seats and tables. When it no longer was feasible to operate and make a profit many clubs ceased operation booking jazz combos and turned to other forms of entertainment, or they simply closed their doors. John Tynan’s Hollywood column from Down Beat, April 4, 1957, confirmed the closing of Jazz City on March 21st, and hinted at changes in other jazz clubs, the Tiffany and Whisling’s.
Maynard Sloate partnered with Gene Norman to run the Crescendo after closing Jazz City. Later he would open the Avant Garde in a classier neighborhood in West Hollywood. The Jazz City premises also returned with a jazz policy and new operators who christened the club as Jazz Cabaret.