Newspaper ads for the Haig in 1955 were sparse. It seems that John Bennett relied on the good graces of Down Beat for the occasional mention of who was performing at the club. The twice a month publication of the magazine required considerable lead time before each issue went to press. The “freebies” were noted in the “Strictly Ad Lib” column of each issue of Down Beat and listed under major cities that were covered by stringers working for the magazine. Down Beat introduced a “Where to Go” column that required payment for the listing. Howard Rumsey’s Lighthouse All-Stars were featured in this column on  a regular basis in 1955.
The January 12,1955, column made no mention of the Haig. This examination of the Haig in 1955 will include some of the “Strictly Ad Lib” columns, a snapshot that notes who was appearing at other jazz clubs in Los Angeles. 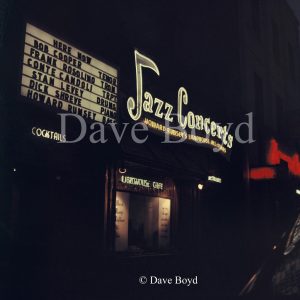 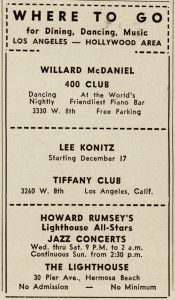 The January 26, 1955, column continued to make mention of what was happening at the Lighthouse. 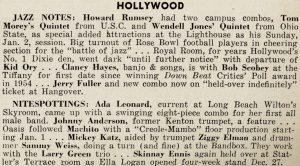 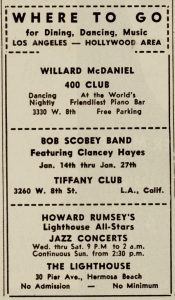 The February 9th issue noted that Frank Rosolino had a new quintet that was to debut at the Haig. 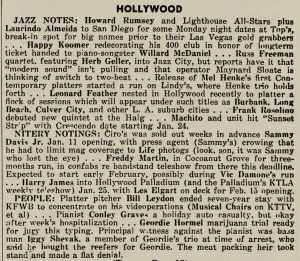 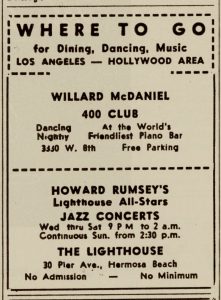 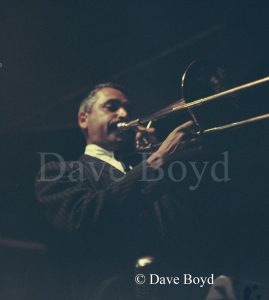 The 400 Club made a change of policy when they booked George Redman and his combo to replace Willard McDaniel who had to cancel his booking due to illness. The Redman group was notable with baritone saxophonist Bob Gordon. In addition to Maury Dell and Don Prell the combo most likely included Herbie Harper. 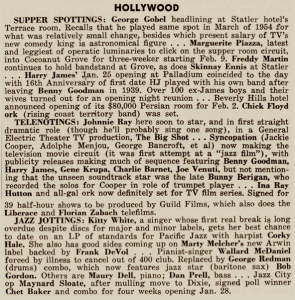 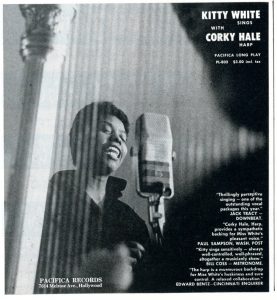 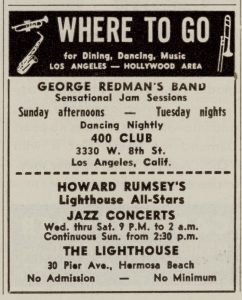 The March 9th column noted that Bud Shank had returned to the Lighthouse from touring with Sinatra in Australia. Shank recorded an album while “down under” that was never released. Bud had an acetate of the session in his collection that now resides at the Los Angeles jazz Institute. 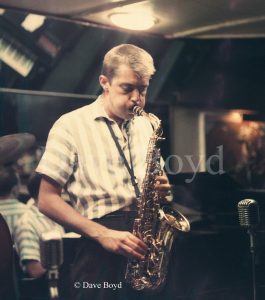 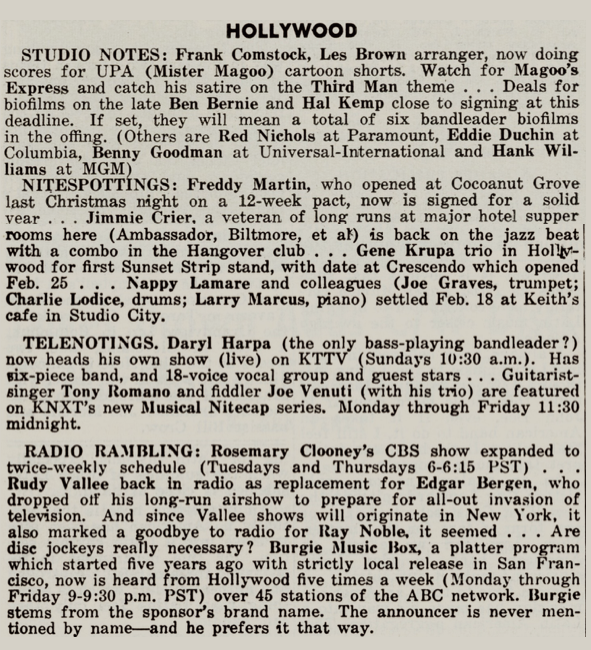 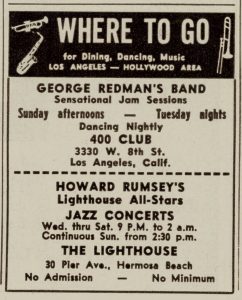 News that Harry Babsin’s Nocturne label was in trouble was noted in March 23rd edition of the column. Later in the spring Babasin negotiated a merger with Liberty Records. 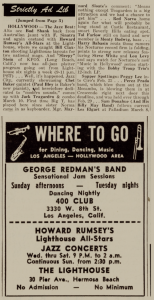 Maynard Sloate booked Jack Teagarden into Jazz City in March, and the Redman group exited the 400 Club with a return to traditiona/Dixieland jazz with Teddy Buckner. William Claxton’s first portfolio of his jazz photography, Jazz West Coast, was on sale at Jazz City as seen in the background behind Jack Teagarden. 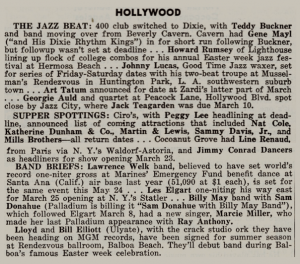 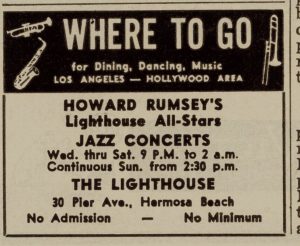 The May 4th column noted that the Jack Teagarden booking at Jazz City had ended and that modern sounds would be returning. 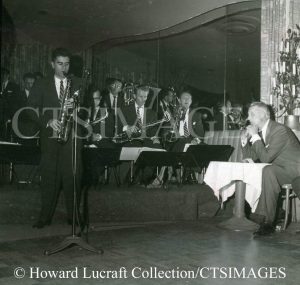 Stan Kenton at the Crescendo.
The May 18th column noted that the Celebrity Room was featuring two modern jazz combos in rotation, a Barney Kessel combo and a Zoot Sims quartet. Previously the room was known for featuring piano stylists like Bobby Short, Bobby Troup, Matt Dennis, etc. 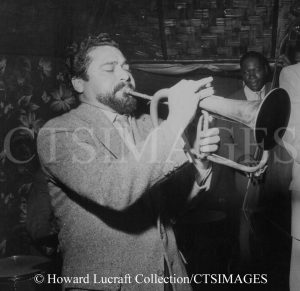 Shorty Rogers and Curtis Counce at Zardi’s.
The June 1 column noted that the modern jazz policy at the Celebrity Room was not successful.

The Haig booked the Hampton Hawes Trio as noted in the June 15th column. The trio remained at the Haig for the balance of the year. Hawes was emerging as one of the brightest stars on the west coast scene with Les Koenig recording Hawes trio for his Contemporary Records label. 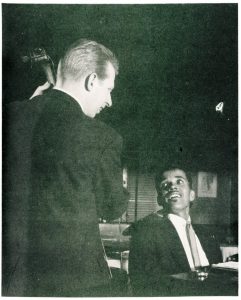 Red Mitchell and Hampton Hawes at The Haig, © Ray Avery/CTSIMAGES 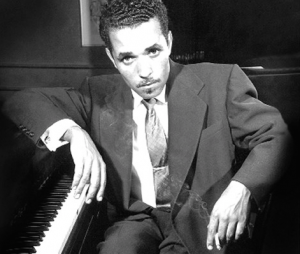 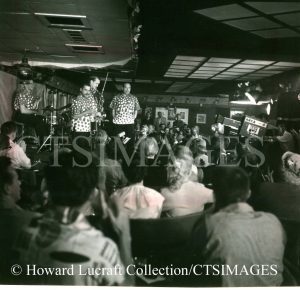 Stan Levey, Frank Rosolino, Bob Cooper, and Howard Rumsey with NBC crew.
The July 27th column noted that Musical Chairs, the local only TV series with Johnny Mercer, Mel Blanc, and Bobby Troup was beefing up the musical ensemble with the addition of Bob Gordon, Bud Shank, and Red Mitchell. “The Troup Group” that was featured on the program remained, Howard Roberts, Bob Enevoldsen, and Don Heath. The program went on national broadcast coverage on July 9th.

The August 10th column noted that Howard Rumsey was set to do a summer jazz series at the Laguna Beach’s Irvine Bowl following the successful appearance of the Lighthouse All-Stars. It did not happen. The column also noted that Hampton Hawes trio with Red Mitchell and Chuck Thompson had been signed to a contract with Contemporary Records. 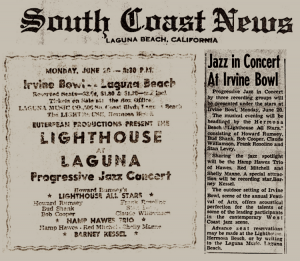 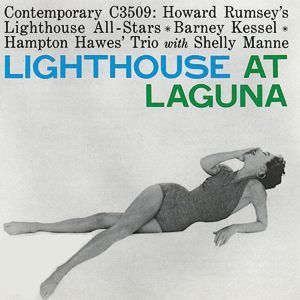 The October 19, 1955, column headlined the newly remodeled Zardi’s, now to be called Zardi’s Jazzland, with an enlarged seating capacity of 200. The competition was heating up as Maynard Sloate’s Jazz City was packing the house on a regular basis with star attractions. 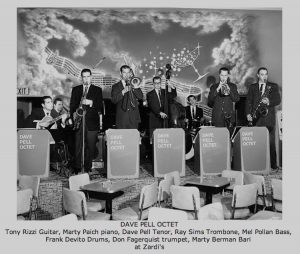 The above photo captures the mural backdrop behind the bandstand at the newly remodeled Zardi’s Jazzland. 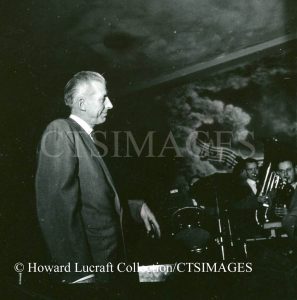 Portions of the new mural can be seen behind Stan Kenton’s crew during his appearancew there.
The November 16th column in Down Beat confirmed that Hampton Hawes had enjoyed a long run at the Haig, with an overdue vacation from the stand that was filled by a Barney Kessel group.

Hampton Hawes received a glowing write-up in Down Beat at the close of the year.

IN THE SUMMER of 1953 Hampton Hawes was regarded by many modern jazz musicians working around Los Angeles as a definite comer. His great piano talent had first captured local attention as a result of his performance at a Pasadena “Just Jazz” concert presented by Gene Norman in 1951 when Hamp was 22. He had behind him then eight months with the Howard McGhee band which had included the late Charlie Parker, and he had absorbed much of Bird’s concepts and learned to experiment with meter and harmonies in the Parker manner.

As a direct consequence of that Pasadena concert. Shorty Rogers in January 1952 used Hamp on the first “Giants” date for Capitol. An introduction followed to Howard Rumsey, and Hamp joined the Lighthouse band at Hermosa Beach. For about 18 months Hamp worked with Rumsey’s Lighthouse All-Stars, a proving ground for many of today’s noted west coast jazzmen.

But just when he was beginning to make a name for himself, Uncle Sam intervened. Hamp was inducted. After 2% years of service, he returned to form his trio and was booked into what he now considers “the most important jazz spot in L. A. —the Haig.”

FROM THE MOMENT the Hampton Hawes trio debuted there, his prospects began to brighten. Lester Koenig of Contemporary Records had heard him and, recognizing a remarkable talent, immediately signed him to cut a series of LPs. That first 12″ record, now released, is the culmination of 10 years’ hard practice and musical maturation for Hampton Hawes and is bringing him the recognition for which he’s waited so long.   Where does artistic creation begin? In Hamp’s case it began with his clergyman father’s church choir. “When I was quite little, I would listen to the spirituals they sang,” he recalls. “The harmonies were so close to the blues . . . Then when I got home, I remember trying to pick out the same sounds on the piano and imitate my sister as best I could. I guess I wanted to play piano real bad.”

He entered Los Angeles Polytechnic high school in the early ’40s and started playing professionally, though he was still a schoolboy. When he was 16, he persuaded his father to okay his application for membership in the AFM.   Hawes has two favorite instrumentalists on piano, Bud Powell and Oscar Peterson. “I’ve never met Powell, you know. Just heard him on records. But you can appreciate a man’s work on records, and I consider Bud to be the greatest modern piano man I’ve heard. He phrases about the best of all. And he was the first pianist I ever heard playing modern. There are some things on his records I don’t like, however—he’s erratic very often, not consistent. But when he’s straight, there’s nobody can touch him. He gets to sound like a horn.”   “Oscar is a very good friend of mine,” he continued. “He’s in a class with the greats. Oscar plays more of a fluent style, like Tatum, and there are certain definite characteristics that stand out in his playing. For example, he will state a theme more or less straight—then bam! He’s off to the races. I guess that’s something I like to do, too, when I play: make the theme clear to the audience first and then you’re off.”

Hamp doesn’t consider he has been influenced nearly so much by modern piano men as by Charlie Parker. “That man was a genius,” he states fervently. “He couldn’t help the way he was in his personal life. He had too many problems clawing at his soul. He gave to modern music something that no one else could, and I don’t think the great blow of his loss is fully appreciated  even yet.”   Getting onto the subject of Dave Brubeck, Hamp thoughtfully explained, “His feeling about modern seems to be different from most, a bit more scientific. Personally, I feel that you can’t be too scientific about music. You’ve got to feel it in your soul always. I don’t say that Dave doesn’t feel his music. I’m sure he does—very deeply, or he wouldn’t play as well as he does.”   Says Hamp, “There’s a lot of discussion now about the influence of classical concepts in jazz. Johnny Graas’ symphony is one case in point. Also much of the writing of Jack Montrose and Jimmy Giuffre. There’s a similarity among the three—and Shorty’s writing, too. But I think Jimmy and Shorty swing more, both in their writing and playing. Giuffre stresses swinging, and I noticed that particularly when I played with both him and Shorty. As a matter of fact, I believe that Jimmy was quite underrated when he played tenor with Shorty’s band.”

A telling moment’s hesitation before Hamp added, “Graas and Montrose are good friends of mine, but I’ve got to tell the truth about how I feel: My idea of jazz is a little different from theirs. My jazz has got to swing above all else. I don’t know what exactly they are striving for but personally I would rather listen to Miles or Bird.

“I love to listen to classical music. Frankly, I regard my music just as seriously as does the classical musician. But I have no desire to be influenced too much by classical concepts. Jazz is the music I feel in my soul and it’s always  got  to  swing—hard.

“Jazz is more accepted today than at any time in its history” he, declared, “but to keep the public interested you’ve got to give the people variety. That’s why I’m  all  for experimental things like Giuffre’s Tangents in Jazz and works such as Graas’, though I may not always see eye to eye with them.”